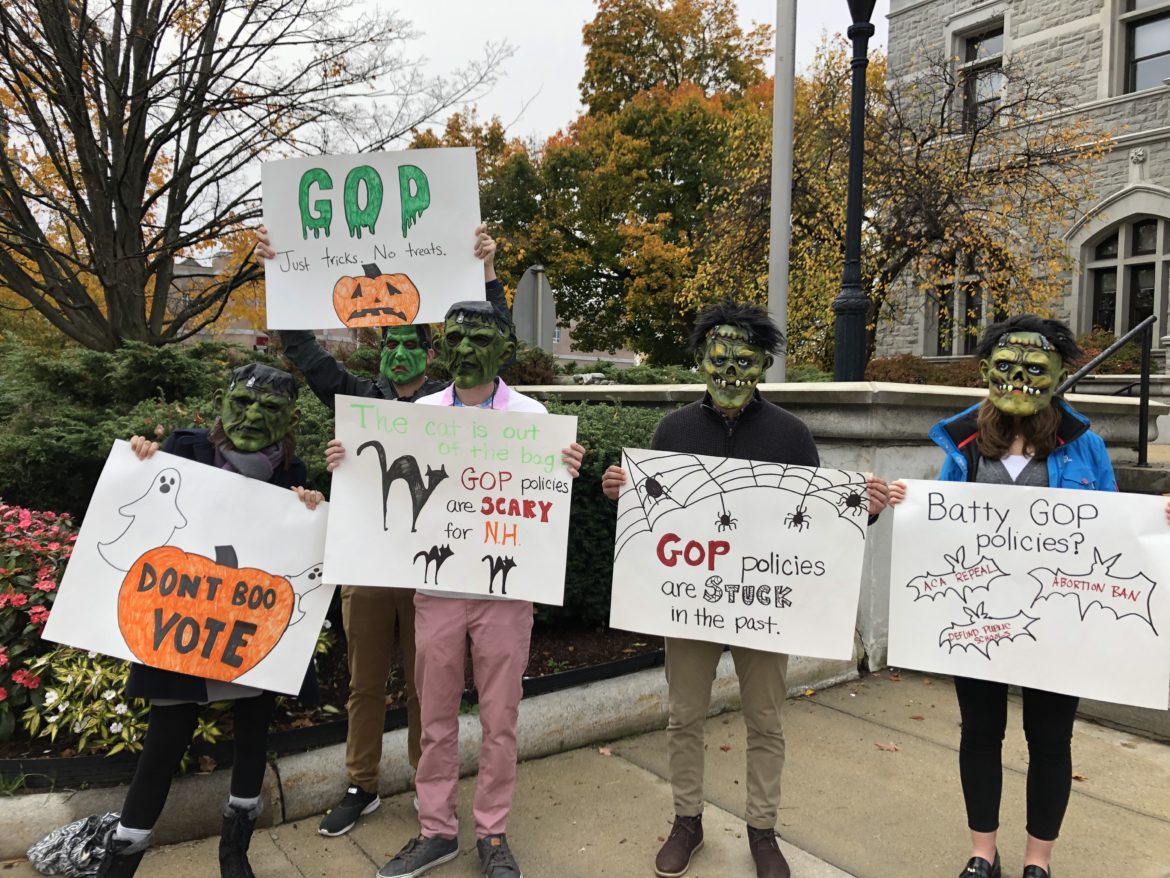 Democrats dressed as zombies Wednesday in front of the Legislative Office Building.

CONCORD – From Dems dressed as zombies denouncing the Republican agenda to a pop-up graveyard on the State House lawn to the GOP looking to get rid of “Disastrous Democrats,” the day before Halloween was sorta crazy.

Republicans held a press conference to unveil a new website that targets Democrats in the House of Representatives who they believe need to go.

The site, called “Flipthenhhouse.com” or https://www.nh.gop/democrats is considered by the Republicans a voter’s guide that tallies up voting records, said state Rep. Stephen Stepanek, R-Amherst.

He said Democrats need to go because they have “overreached by passing multiple income taxes, a capital gains tax. They have attacked the Second Amendment. They have banned plastics. They have actually wanted to issue licenses to illegal immigrants and they are weakening the integrity of our voting laws. Thanks to Governor Sununu and his red veto pen, NH has been protected,” he said.

But the last session, he said, shows that the state needs to vote out the Democrats and regain a Republican majority in the House.

“They can no longer hide from their voting record,” Stepanek said.

Moments before Republican leaders gathered in the Legislative Office Building for their press conference, Democrats, dressed as zombies, stood outside the doors decrying the Republicans on everything from disemboweling “Obamacare” gag rules and push backs on women’s reproductive healthcare, voting rights and access to the ballot box.

One ghoul held a sign with a black cat painted on it reading: “The cat is out of the bag. GOP policies are SCARY for NH.”

Another held a sign reading “GOP. Just tricks. No treats.”

Over on the State House Lawn, members of the Kent Street Coalition built a fake graveyard. Each tombstone had the name of a bill that Gov. Chris Sununu vetoed this past session.

Louise Spencer called it a failure of leadership and said the coalition will “not rest in peace” until the state has paid family medical leave, improved wages, and working conditions and fair hiring.