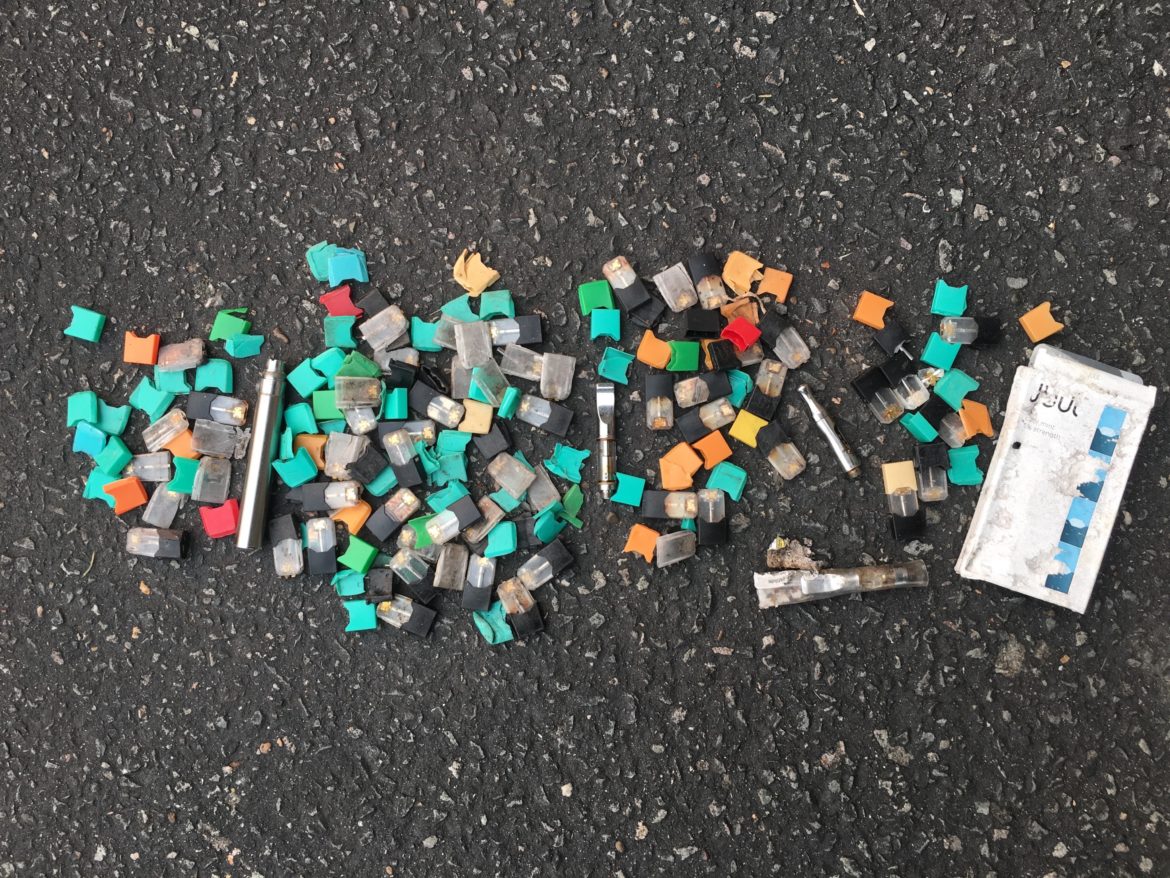 Nearly two years ago, Jeremiah Mock heard a student in Marin County, California, complain that her school was littered with e-cigarette waste. A health anthropologist by training, Mock did some shoe-leather investigating in a student parking lot, where he found a significant amount of e-cigarette and tobacco trash.

From July 2018 through April 2019, he and a colleague, Yogi Hendlin, collected tobacco, cannabis and e-cigarette waste from 12 public high school parking lots across the San Francisco Bay Area. They discovered that e-cigarette waste made up 19 percent of that recovered litter – trash that a mere a decade ago would scarcely have existed on high school campuses anywhere.

As media coverage focuses on the more immediate public health crisis of vaping, and its link to a recent spate of mysterious lung illnesses and deaths, researchers like Mock and Hendlin caution there also is a looming environmental threat.

Little research has been done on the impact of e-cigarette waste, which consists of microplastics, metals, nicotine and combustible lithium ion batteries. In fact, Mock and Hendlin’s garbology study, published earlier this month in a weekly report from the Centers for Disease Control and Prevention, is the first to systematically catalog e-cigarette trash.Want more stories like this? Sign up here to get news alerts.

“I would say it’s alarming,” said Mock, an associate professor at the University of California, San Francisco, and a member of the school’s Center for Tobacco Control Research and Education. Hendlin is a UCSF research associate.

Their school parking lot sleuthing also opens another window on the widespread use of e-cigarettes among teens and, increasingly, very young teens.

The FDA reports that 20.8 percent of high school students use vaping devices, and recent surveys indicate that use is growing even among children in middle school. Flavored e-cigarettes, which are especially popular among teenagers, are now the target of bans in eight states, according to the advocacy group Campaign for Tobacco Free Kids.

Many teens and adults have fallen victim to a growing public health crisis involving vaping products. Earlier this month, a 17-year-old from New York became the first teenager to die of a mysterious vaping-related illness that has killed 33 people and sickened nearly 1,500 across every state except Alaska, according to the CDC. The agency has not yet identified a specific cause of the injuries, though it appears many of the victims were vaping THC, the ingredient in marijuana that produces the high.

While the medical mystery has sparked a firestorm of controversy and headlines nationwide, Mock’s study indicates there is little awareness around the environmental hazards posed by these devices.

“[Teenagers] possibly don’t think there’s anything left of a Juul pod that is going to be a problem,” Mock said, referring to the most popular e-cigarette maker, Juul Labs Inc.

Once an e-liquid plastic pod is tossed on the ground, it can quickly be crushed into smaller pieces, Mock said. Shattered pods produce microplastics, which can enter waterways and be ingested by animals. Discarded pods often still have residue of e-liquids, including nicotine and other toxic chemicals.

The vaping boom has also produced millions of e-cigarettes equipped with lithium ion batteries, which can only be safely disposed of in hazardous waste facilities or taken to recycling centers. But the packaging for e-cigarettes doesn’t include instructions for how consumers can safely dispose of them. As a result, these devices are frequently tossed in trash or recycling bins.

One consequence of this is fires. In recent years, lithium-ion batteries from a variety of electronic products have sparked fires that caused millions of dollars worth of damage to recycling trucks and plants, though it’s uncertain whether, or how often, e-cigarette batteries were the culprit.

Juul did not respond to a request for comment. The company’s website directs users to recycle pods along with other e-waste but doesn’t say how.

Gregory Conley, president of the American Vaping Association, said in an email that it doesn’t seem necessary for companies “to tell people to throw away their trash like good human beings.”

Advocates in California and other states have pushed lawmakers to adopt what’s been called extended producer responsibility, which requires companies to produce recyclable products or establish take-back programs to eliminate environmental waste.

Sanborn, who previously cited successes in handling products such as mercury thermostats and needles this way, said that that placing a financial burden on companies encourages them to produce environmentally friendly products.

“They actually have to rethink the design because it’s adding cost to their bottom line,” Sanborn said.

California State Sen. Hannah-Beth Jackson has introduced a bill that would require companies to make recyclable smoking products or have a producer take-back program to handle the waste.

The bill, SB 424, passed in the state Senate. Sanborn said the current version of the bill is unlikely to be approved by the state Assembly without an amendment to exempt tobacco cigarettes.

Jeremiah Mock said he hasn’t seen companies like Juul issue any detailed advisories about how to dispose of e-cigarettes.

“These companies are not interested in telling users what the potential environmental impact is of disposing of these products,” he said.

Mock added that in the absence of better public information, some consumers are actually contributing to environmental damage even while expressing disdain for e-cigarettes. In a recent social media trend, teens who want to quit vaping have filmed themselves tossing their e-cigarettes out of cars, off buildings and down sewer grates.’

This story was produced by FairWarning (www.fairwarning.org), a nonprofit news organization based in Southern California that focuses on public health, consumer and environmental issues. ‘