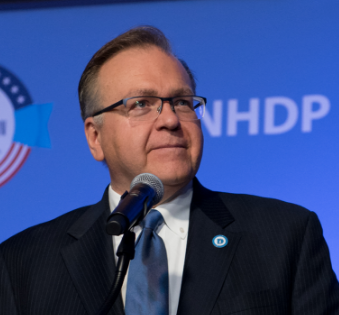 By Ray Buckley, chair of the New Hampshire Democratic Party

While Democrats and Republicans in New Hampshire don’t agree on lots of issues, one area where there is common ground today is support for equality for all Granite Staters, no matter their sexual orientation or gender identity.

Twenty-two years ago, as Governor, Jeanne Shaheen signed legal protections for gay and lesbian Granite Staters into law, making New Hampshire a leader in the fight against discrimination in employment, housing, and service.

None of this progress came easily or quickly, but I’m proud of New Hampshire’s pro-equality stance.

This group’s laudable mission is to “work to make the Republican Party more inclusive, particularly on LGBT issues.” But this week, the group undermined its own mission by choosing to endorse anti-LGBT former state representative Victoria Sullivan in her race for mayor of Manchester.

Victoria Sullivan does not merely toe the Republican line. She’s not a libertarian. She’s an extremist who has voted against protections for transgender Granite Staters, supporting conversion therapy – a range of dangerous and debunked practices that claim to “convert” a person’s sexual orientation, which many in the LGBT community consider psychological torture. And she’s even signaled that she believes that being gay or lesbian is “not science.”

In the warped political reality of 2019, Victoria Sullivan has at every chance tried to completely erase the existence of gay, lesbian, and transgender Granite Staters – and now this so-called gay advocacy group is boosting her candidacy, giving a bigger platform to a candidate who has acted against their very existence.

If this New Hampshire organization stands for Victoria Sullivan and her anti-equality agenda, then it’s clear it has completely lost its way. I understand New Hampshire Log Cabin’s support for Republican candidates who believe in their agenda, even when I support a different candidate. But in the famous words of American novelist James Baldwin, “We can disagree and still love each other unless your disagreement is rooted in my oppression and denial of my humanity and right to exist.”

To support a candidate who believes that being born LGBTQ is so wrong that we should “convert” to being something we are not is scary and wrong. The Log Cabin Republicans might reconsider their mission statement if Victoria Sullivan’s agenda is one they share.