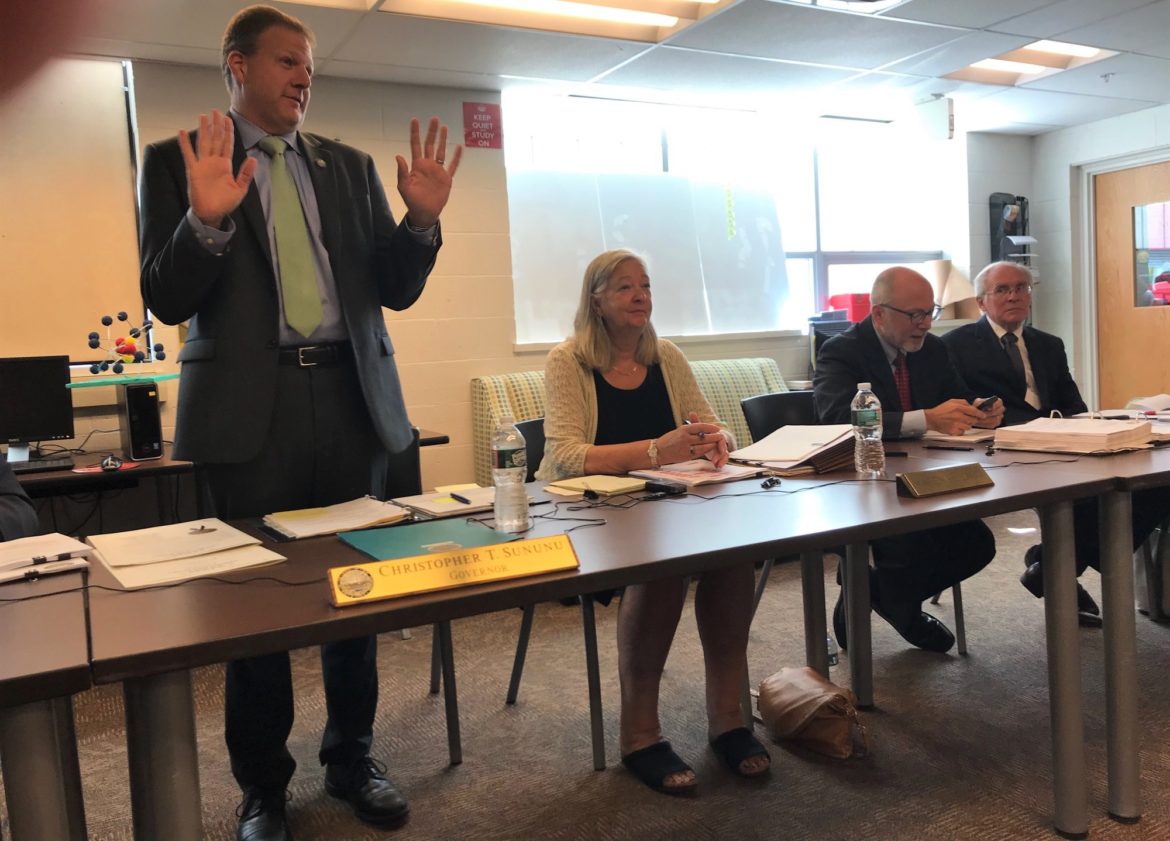 UPDATED: MANCHESTER  — The Executive Council Wednesday approved more than $80 million of agency requests for emergency funding as the state budget impasse heads into its third month.

The emergency funding requests seek money beyond the one-quarter of last fiscal year’s spending authorized under the continuing resolution approved by lawmakers and Gov. Chris Sununu due to his veto of the $13.3 billion budget passed by lawmakers in June.

The emergency funding requests represented about 70 of the 132-item council agenda and drew almost no discussion for the five Executive Councilors at their meeting at the Boys and Girls Club of Manchester.

The requests included money to continue social service programs for the developmentally disabled, Temporary Aid for Needy Families (TANF), substance abuse treatment and Choose for Independence for the elderly with higher caseloads than originally approved in last fiscal year’s budget.

It also included additional money for the Department of Transportation for summer highway and bridge work, and for overtime for Department of Safety employees including State Police and corrections officers.

All state agencies made an emergency request for money for an additional pay period within the three-month continuing resolution not in the same period for 2019 appropriations.

The extra pay period includes both wages and benefits with costs totaling $25 million due to raises in the new collective bargaining agreement, step increases and new hires.

The bulk of the remaining requests were for the Department of Health and Human Services.

One large request concerns a $35 million federal grant to help the state’s response to the opioid crisis.

The council approved some of the money earlier and agreed to spend more to continue programs through September.

The council approved spending $7.2 million in federal Medicaid money to cover increased caseloads in a number of health-care programs.

The council also approved an additional $8 million for developmentally disabled services to new clients who were removed from the wait list last fiscal year.

The additional money would also allow those coming off the wait list this fiscal year to receive services under the program.

District 2 Executive Councilor Andru Volinsky, D-Concord, wanted to know if there is a plan for increasing Medicaid rates for providers individually as proposed by Sununu and Health and Human Services Commissioner Jeffrey Meyers.

The vetoed legislative budget included money for a 3.1 percent rate increase across-the-board for Medicaid providers for each of the two-year operating budget.

“Have we (identified) who would receive the raise and who would not,” Volinsky asked, noting the governor and Meyers said they wanted more flexibility to provide raises to those who have not had them in a long time.

Sununu said a pre-written formula does not exist right now. He did note that a rate increase to providers is not necessarily a raise to employees providing the care. “What a provider does is up to them, it could be raises,” he said.

He said Attorney General Gordon MacDonald was asked about his duties, pledges and oath and how they would impact him as a judge, but “we should make sure . . . (of a judge’s)  impartiality.”

What is the process to bring applicants forward as impartial nominees, Prescott asked, and he wondered how much the committee would be willing to share about its work.

How should the council move forward if there are flaws in the process, he asked, noting the council voted down MacDonald’s nomination to be chief justice, yet approved Martin Honigberg to the Superior Court, who has been as politically active as MacDonald.

“Something definitely went wrong with his whole process of getting impartial judges,” Prescott said. “Let’s get the facts before us, let’s dig deeper and find out why there was a different outcome.”

Sununu said the selection committee is completely independent of the governor and council. “This body nor I should tell them how they should do their job,” he said. “I have full faith.”

He said the committee represents a wide range of backgrounds and makes the best recommendations for him to pare down and present to the council.

“This has worked incredibly well for me and other governors as well,” Sununu said, adding, “I will ask them what they are willing to provide (for information.”

After the meeting, Volinsky noted the committee is chaired by former Supreme Court judge and GOP Congressman and activist Chuck Douglas and told reporters to look at the members to see if there is a partisan bent to the commission.

District 5 Executive Councilor Debora Pignatelli, D-Nashua, said for six weeks she has asked Sununu about a nominee for the Supreme Court. “I should not have to beg to talk to my governor about a nomination,” she said, adding in the nine years she has served on the council the governor always called before making a nomination.

She said Sununu has not talked to her about any of the judges or department heads he has nominated, which was always done as a courtesy.

“This is not a collaboration,” Pignatelli said.

Sununu’s spokesman Ben Vihstadt responded to a request for comment after the meeting.

“When Governor Sununu was an Executive Councilor, then-Governor Maggie Hassan did not consult him on nominations. Furthermore, the Councilors know how to reach out to the Governor and share their thoughts on any pending nomination, as they have done in the past. The Councilors also have ample opportunity to conduct their own vetting process through public hearings and one on one meetings with nominees,” Vihstadt said.

The states of Maine and New Hampshire reached an agreement with contractor Ciambro for rebuilding the Sarah Long bridge between Portsmouth and Kittery, Maine.

The company had requested nearly $17 million in additional compensation for the $181.2 million project that was over budget by about $5 million.

Under the settlement, New Hampshire will pay an additional $4 million.