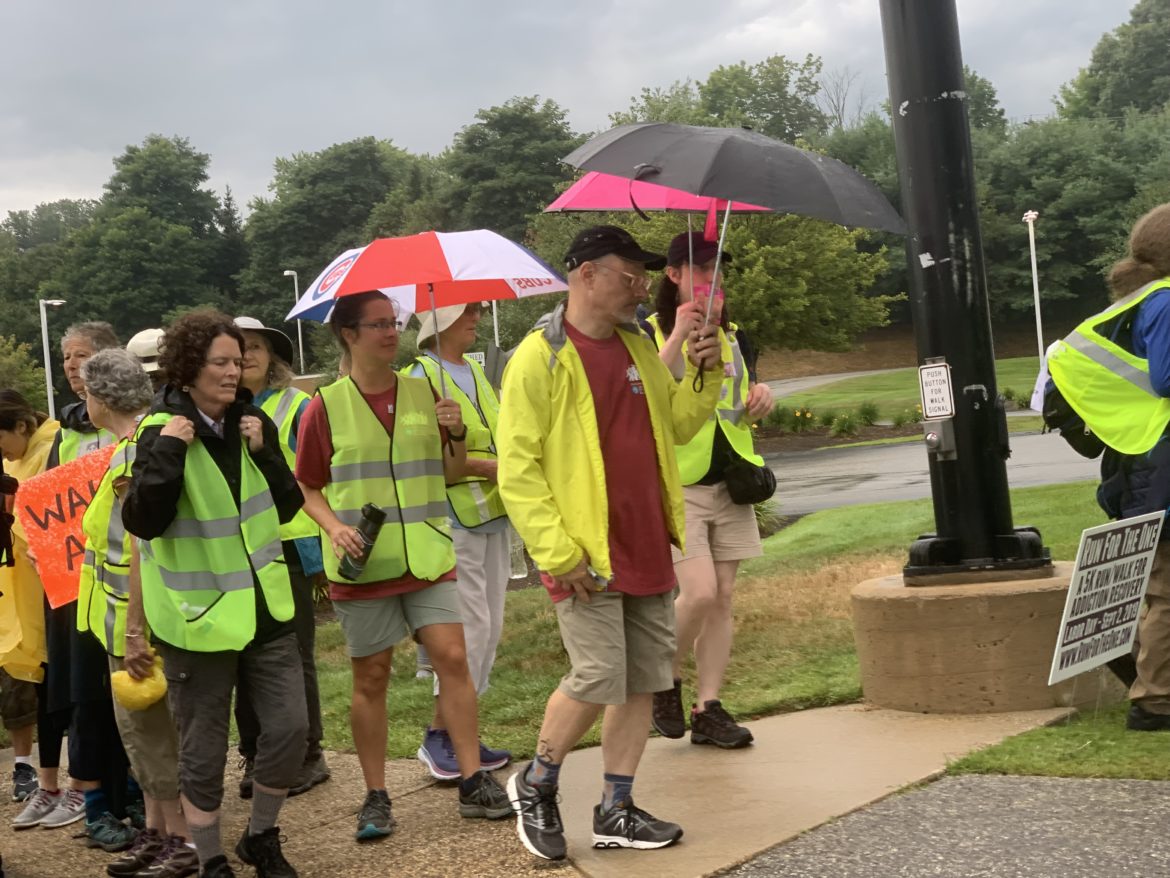 Members of the NH Immigrant Solidarity Network walk on Loudon Road in Concord in stormy weather Wednesday on their way to Dover.

Description: Members of the NH Immigrant Solidarity Network and allied groups will walk across 4 states to spotlight “the moral crisis we face as our country targets and expels immigrant families.”  They plan to walk, march and even bike, a combined 280 miles from Concord, NH; Boston, MA; Montpelier, VT and Kittery, ME to Dover, NH, where ICE uses the Strafford County Jail as a detention center for people it intends to deport.

All marchers will end at the Strafford County Detention Center in Dover on Saturday, Aug. 24 after 3 p.m. for an interfaith service of lamentation and hope

“As we witness the increasing suffering of those who are judged not to belong—immigrants, Muslims, Jews, people of color, and others—we recall the spiritual truth that when one of us suffers, all of us share in that suffering. Every religious and spiritual tradition requires that we act boldly, courageously, and creatively to relieve our shared suffering.

“We march to send a message rooted in our faith that the suffering perpetrated against immigrants is a moral crisis. We march to end the practices that target and separate immigrant families and to replace them with policies that align with our deepest spiritual, humanitarian and constitutional values,” said Rev. Jason Wells, Executive Director of the NH Council of Churches, a walk co-sponsor.

“As we head toward the 2020 presidential election, there’s no better time than now to use this act of solidarity as a call to action. By putting our bodies in motion, we are sending a very clear demand to our nation’s leaders – Presidential candidates and our Members of Congress – a demand that they protect immigrant families and enact humane immigration policies. A demand that they end the detention and deportation machine by cutting funding for ICE and CBP and reinvesting this money into an agenda rooted in the power of love and community building”, added Eva Castillo, Vice President of the Granite State Organizing Project, another co-sponsor of the Solidarity Walk.