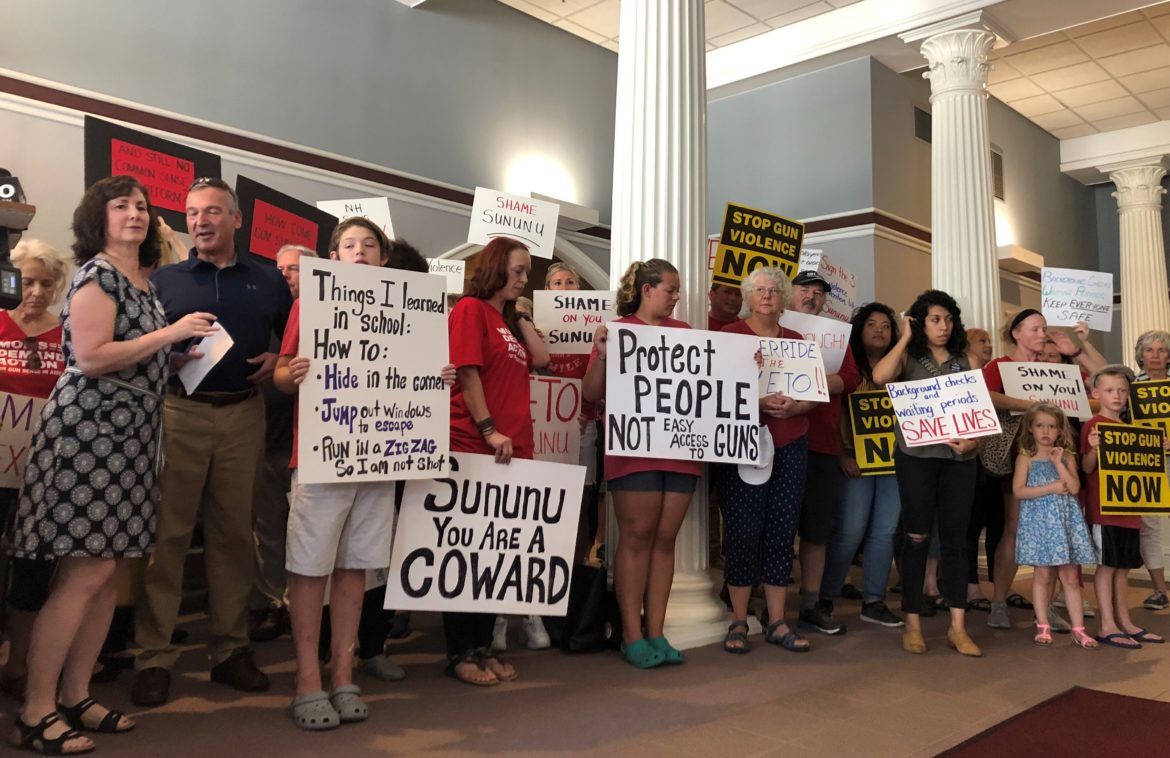 CONCORD – Residents of all ages from across the state headed to the Legislative Office Building on Monday to tell Gov. Chris Sununu they will not forget his veto of three gun safety bills when they go to the ballot box next time.

Stacy Brown of Newmarket took time out of her summer and back-to-school shopping with her children, Declan, 8, and Soryn, 5, to hold signs in the lobby denouncing Sununu’s vetoes, one of which was the 50th veto he signed this year, a record, beating that held by former Gov. John Lynch at 15 vetoes.

Zandra Rice Hawkins, of Gun Sense NH, a project of Granite State Progress, said at the press conference that the vetoes would not be forgotten when voters go to the ballot box in his bid for re-election.

She said he will be held accountable for blocking background checks on firearms purchases, waiting periods to delay and perhaps avert gun violence, and the last bill that would have clarified gun-free school zones.

Like former U.S. Sen. Kelly Ayotte R-N.H., Hawkins said Sununu sided with the gun lobby over his constituents. And she noted that Ayotte lost re-election. Sununu should expect to face the wrath of his constituents over these vetoes, Rice Hawkins said.

Sununu sent out a veto message last Friday afternoon saying New Hampshire is one of the safest states in the nation, “and we have a long and proud tradition of responsible firearms stewardship. Our laws are well-crafted and fit our culture of responsible gun owners and individual freedom.”

The bills came to his desk only days after two mass shootings in Ohio and Texas. Sununu said the “root causes of hate and violence,” is where the United States as a nation should focus energy.

He pointed to investments in-state to deal with the state’s mental health needs and to “build a more welcoming and tolerant state.” Specifically, he pointed to the creation of a School Safety Task Force, rebuilding the mental health system, establishing the Governor’s Advisory Council on Diversity and Inclusion and the establishment of the state’s first Civil Rights Unit to go after hate crimes.

“We are taking steps to ensure the safety of our citizens,” Sununu said in his veto message.

But New Hampshire gun violence prevention advocates were not pleased and indicated that he is not doing enough.

High School student Ruby Carr, who will be returning to her studies next week at Coe-Brown Northwood Academy, said: “Politicians who oppose gun violence prevention will no longer be tolerated.”

She said Sununu’s inaction on the bills has “made it clear that he doesn’t care what students have to say about our right to be safe at school.”

Tracy Hahn-Burkett of Bow, who is the leader of the working group on Gun Violence Prevention for the Kent Street Coalition, noted that helping reduce the youth suicide problem was among the governor’s pledged goals in his inaugural address.

Instead, she noted the governor “callously” dismissed concerns of state residents.

“So Governor Sununu, we will hold you accountable for this. You’ve made it clear that you will not stand up for our safety. Now our grassroots will be motivated to talk to voters about your utter failure to lean on gun violence prevention when we need you.”

Kate Day of Spofford, a Republican activist, attended the press conference as well and did not like what she heard.

State Rep. Katherine Rogers, D-Concord, said she has hope that the governor is willing to sit down and hammer out a compromise measure. Sen. Dan Feltes, D-Concord, who is a likely gubernatorial candidate, spoke as well at the event. He said this year, New Hampshire has had the most homicides in 15 years.

Sununu is “holding us back on making progress on public safety for our children, for our families and our communities,” Feltes said.

Deidre Reynolds, a leader with New Hampshire Moms Against Gun Violence said Sununu “had a chance” to make a meaningful difference to “insert a buffer” or time period to prevent suicidal people from obtaining a gun. By vetoing the bills, he chose not to make a difference, she said.

“Just who is Sununu working for?” Reynolds asked.

She promised, “We will bring the fight out to the ballot box next year.”