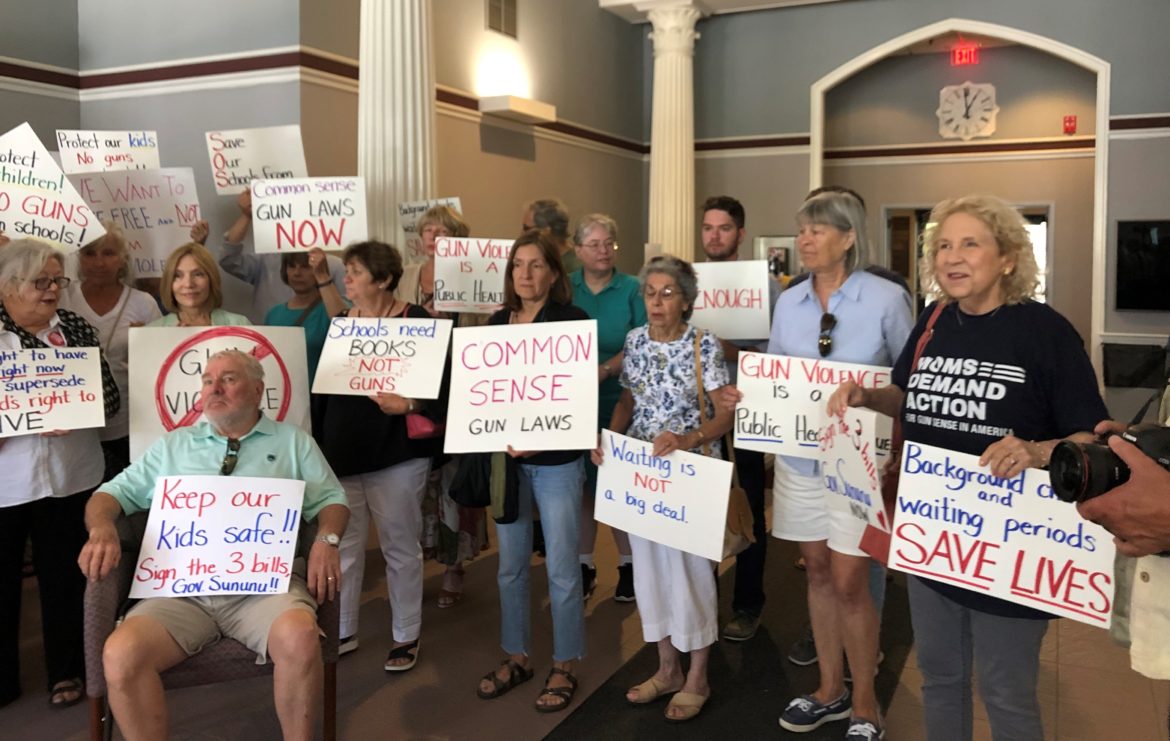 Gun safety advocates gathered Monday in Concord to try and meet with Gov. Chris Sununu to encourage him to sign three pieces of gun legislation, but he was in an already scheduled meeting.

CONCORD — Gov. Chris Sununu vetoed three gun violence prevention bills, minimum wage legislation, a redistricting commission and others on Friday that were all close to the hearts of Democratic lawmakers.

“New Hampshire is one of the safest states in the nation, and we have a long and proud tradition of responsible firearm stewardship,” Sununu said in his veto message. “Our laws are well-crafted and fit our culture of responsible gun ownership and individual freedom.”

Sununu said the focus of the nation must be on addressing the root causes of hate and violence and mentioned steps he has taken to that end. “Here in New Hampshire we have taken multiple steps to address our mental health needs and to build a more welcoming and tolerant state.”

New Hampshire Democratic Party Chairman Ray Buckley said in a statement that followed the veto announcement: “Chris Sununu cares more about his campaign contributors like the NRA and gun manufacturers than he does about the people of this state. And that’s all you need to know about Chris Sununu.”

Senate President Donna Soucy, D-Manchester, said: “Since there have been more mass shootings than days this year, our thoughts and prayers are empty gestures without the courage and conviction to act to prevent future tragedies. That’s why it is so deeply disappointing that in the midst of a national crisis and in the wake of two mass shootings, Governor Sununu is holding New Hampshire back from making progress on gun violence ­prevention with his vetoes of three common sense public safety bills, including background checks—which 90% of Americans support.”

“From the School Safety Task Force to rebuilding our state’s mental health system, including the largest investment of resources in decades, to establishing the Governor’s Advisory Council on Diversity and Inclusion, and to establishing the state’s first Civil Rights Unit to step up prosecution of hate crimes, we are taking major steps to ensure the safety of our citizens is paramount.

“These three bills would not solve our national issues nor would they prevent evil individuals from doing harm, but they would further restrict the constitutional rights of law-abiding New Hampshire citizens,” Sununu said.

“The vast majority of gun owners in New Hampshire are honest, law abiding citizens,” said Hinch. “These bills are an unnecessary attempt to solve a problem that doesn’t exist in our state. This excessive government overreach has the potential to make criminals out of responsible gun owners.”

“Unfortunately, Governor Sununu is once again standing with the NRA to the detriment of public safety. Just days before a visit from President Trump, whose racist rhetoric is spurring violent action, Governor Sununu refused to take action to prevent gun violence but chose instead to scapegoat people who experience mental illness and downplay the common denominator in these mass shootings—easy access to firearms—to appease corporate lobbyists and campaign donors. New Hampshire deserves better,” Hennessey said.

“Legislators should not abrogate their responsibility to the voters and delegate authority to an unelected and unaccountable commission selected by political party bosses. We should all be proud that issues of gerrymandering are extremely rare in New Hampshire,” Sununu said.

The current process is fair and representative of the people, he said, adding he doesn’t question the sincerity of the lawmakers who support HB 706.

But he quoted an out-of-state organization saying its mission was “to favorably position Democrats for the redistricting process.”

“I am devastated that today the Governor chose to veto bipartisan legislation to create an independent redistricting commission in New Hampshire. There is no better example of improving our democracy than was demonstrated in this bill.

“Both the House and Senate Election Law Committees passed this bill with unanimous bipartisan support and the full Senate passed it on a voice vote. Only the House Minority Leader and Governor Sununu worked to keep their party’s best interest above the best interest of Granite Staters,” Smith said.

Devon Chaffee, Executive Director of the ACLU of New Hampshire, said: “New Hampshire had the opportunity to be the first state where the legislature chose to implement the commission rather than being forced to through a ballot measure.

“Granite Staters deserve to choose their elected leaders—not the other way around. The veto of this bill means that New Hampshire is putting politics above fair elections,” said Chaffee.

“This bill would have had a detrimental effect on not only the very Granite Staters it purports to help but also on the New Hampshire Advantage,” Sununu said. In his news release announcing his veto, Sununu included statements from the New Hampshire Lodging and Restaurant Association and NFIB.

“The association’s primary objection to the bill was the manner in which it set the minimum wage for tipped employees,” Somers said.

Senate President Soucy,  prime sponsor of SB 10, said: “While it is disappointing that Governor Sununu vetoed legislation today to re-establish and raise New Hampshire’s minimum wage, I remain committed to this fight and extend my sincere gratitude to the advocates and lawmakers pushing to raise the wage. New Hampshire values work—it’s far past time for us to guarantee that hardworking Granite Staters earn enough to support themselves and their families.”

House Republican Leader Hinch said: “Our state’s small business community can breathe a sigh of relief today thanks to the Governor’s veto of this ill-conceived bill. The negative impact of a government mandated wage hike is demonstrably clear.”