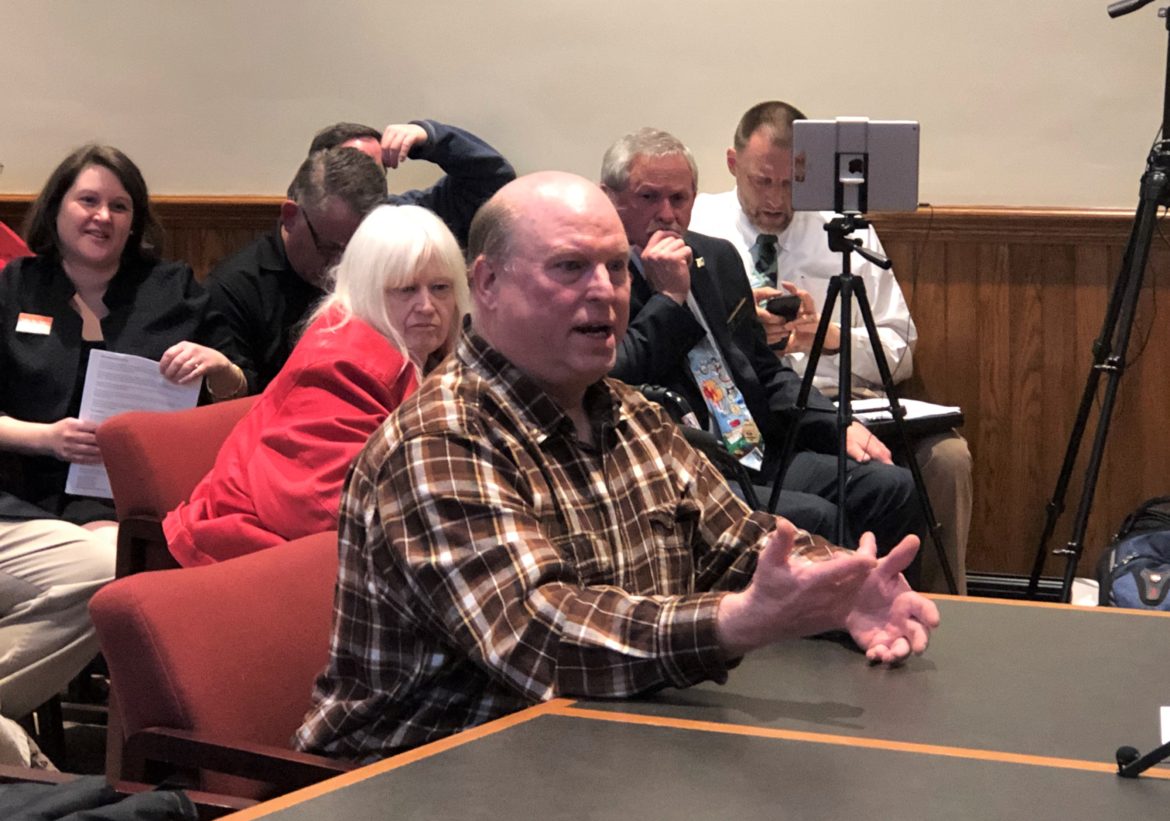 Gregory Montgomery of Manchester testified Tuesday on a bill sponsored by Rep. Katherine Rogers, D-Concord, who is pictured behind him.

CONCORD – Three gun bills aimed at “closing loopholes” for gun sales, imposing waiting periods for such purchases and banning guns in safe-school zones brought out large crowds on both sides of the issue on Tuesday.

Testimony was divided between those who called these “common sense” measures that the state should take to protect its citizens and those who consider them “destructive” efforts to limit rights under the Second Amendment.

All three bills previously passed the House. For hours, members of the Senate Judiciary Committee heard the bills after similarly packed public hearings in the House during the winter.

Bette Lasky, a former state Senator from Nashua, spoke in favor of all three bills saying she grieves for communities impacted by gun violence.

“In no way do I see these bills as infringing on Second Amendment rights,” Lasky said.

The measures, she argued, “strike a balance between what is reasonable…it is about protection of our citizens.”

“If it protects one life and saves one family the grief…then you will have done a really good thing,” Lasky said.

But Lauren LePage of the National Rifle Association opposed all of the legislation. Background checks will not prevent criminals from obtaining firearms, LePage said.

Prime sponsor of the bill, Rep. Katherine Rogers, D-Concord, said there are loopholes for background checks that need closing, particularly at gun shows.

“While it won’t prevent every tragedy it can save lives,” she said.

The measure makes an exception for transfer of guns between friends and family if you know their background, she said.

Opponents argued that the legislation creates a document, a “register of each sale,” which is prohibited under federal law.

Susan Olsen, speaking as the director of legislation for the Women’s Defense League of New Hampshire, said the bill is going to rely on a failed system with irregularities.

“The New Hampshire Gun Line is incompetent,” she said.

House Bill 514 would require a state, seven-day waiting period on the purchase and delivery of a firearm. Some said it could take longer, as long as 11 days when weekends and holidays are considered.

Proponents said the bill could prevent impulsive behavior such as suicide, saying a gun is the most lethal means used to commit suicide.

Others said it was a violation of Constitutional rights and would shut down gun shows and auctions because no one would be around a week later to deliver the firearm.

Dr. Leonard Korn, speaking on behalf of the New Hampshire Medical Society, wanted to encourage support for the bill calling it a crucial piece of legislation that can interrupt a suicide. It is rather common to use a firearm in a suicide in New Hampshire, he said. People can be helped if the impulse to act is interrupted, he said.

There were about 130 suicides by firearms last year, Korn said.

Tracy Hahn-Berkett of Bow, a member of the Kent Street Coalition, noted that Gov. Chris Sununu pointed out mental health as a major issue to address in the state. She said states with waiting periods have a 27 percent lower rate of suicide.

The cooling-off period also provides a similar opportunity for preventing homicide, she said.

“It does create an inconvenience for purchasers,” she acknowledged, but it ensures public safety. “Everyone should be on board with this.”

Larry Melanson of Webster was not on board.

“This bill serves no legitimate purpose,” Melanson said. “I am concerned that there is a lack of empathy for those who have an abusive domestic partner who would have to wait up to two weeks,” for a weapon.

Alan Rice of Bedford, speaking on behalf of the Gun Owners of America, said the bill will not prevent suicide but will “drive people to a different means. We don’t feel anyone should have to wait.”

Opponents said criminals have not obeyed “gun-free zone” laws, while the law enable criminals to more easily prey on children.

Supporters said that the bill would do the opposite.

Members of the Senate Judiciary Committee took testimony but did not vote on the bills on Tuesday.