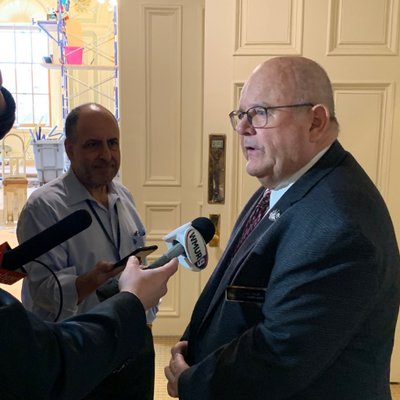 InDepthNH.org takes no opinion on politics, but encourages diverse ideas.

Just a few months ago in December, Rep. Stephen Shurtleff won the election for House speaker, and I wished my friend the best. He accepted his nomination by saying that, “it’s important to put partisanship aside to work for the common good of our people…” I couldn’t agree more. Government works best when parties work together to produce the best policies possible for our state. However, Republicans have been extremely disappointed by how the opposite has occurred. This session has been marred by disorganization, partisanship, and rushed, heavy-handed policy.

Not too long ago, we had one of the most unfavorable business tax climates in the nation. Through Republican efforts to reduce rates, and reform other areas of tax law, we felt we made improvements. Business tax revenue has outperformed estimates, and contributed to surpluses in the last 2 state budgets. Most people would view this as a successful outcome. But not Democrats. Immediately, we saw a bill to repeal those business tax reforms, and a bill to introduce a new tax on capital gains. The economy is doing great in many parts of our state, and Republicans would like to encourage that to continue and spread. These Democrat initiatives propose to siphon over $240 million out of our economy over the next two years.

Speaking of being anti-business, I’m sure you have heard a lot about their paid family leave mandate. I want to set the record straight; Republicans support paid family leave. But we don’t support a mandated and state-run family leave program that will grow government, hurt employers, and force our citizens into an income tax. That’s right, folks. Everyone’s wages will be taxed for this benefit whether you qualify for it or not, and it will cost businesses and employees $168 million per year.

All of these initiatives to increase taxes have, ironically, come under their banner of “tax relief”. They would like you to believe that hundreds of millions of dollars in new or increased taxes in one area will result in lower taxes in others. It all comes out of our economy somehow, and the only proven method to keep taxes low is to spend less. Over the last two budgets, Republican leadership resulted in responsible state spending where we were able lower taxes in some instances, and not raise any tax or fee. In contrast, the budget just passed by House Democrats increased spending by 13%, which is roughly $1.5 billion more than our current budget.

We’ve had several other bills pass the House that defy common sense. Let’s take, for example, allowing undocumented immigrants to obtain state drivers licenses. That bill rewards people who have admitted to not following our immigration laws by giving them a government issued ID. Maybe you’ve heard about the Democrats’ House bills that seek to restrict the distribution of plastic straws and plastic bags. The straw bill is more stringent than that of California, and the bag bill was so poorly written that it requires stores to charge you 10 cents per bag, even if they don’t want to.

They hastily removed funding for the Internet Crimes Against Children task force, and funding for a new secure psychiatric unit from the Governor’s budget proposal, and were surprised at the public blowback they received. Although I’m glad an amendment was adopted to fix this inexcusable oversight to ICAC, a new secure psychiatric unit is a critical piece to the state’s 10 year mental health plan, and it’s deeply concerning that this wasn’t a priority.

Those are just a small sample of our policy complaints, and we have serious concerns with Democrats’ management process shortcomings, too. We’ve seen several instances of legislation being rushed through without care for details. We’ve seen lengthy amendments come before committees for a vote without letting Republicans have an opportunity to review them in advance. The House has even seen multiple bills come to the floor without a committee recommendation because some committees failed to meet deadlines that were published months in advance.

Running the House takes discipline, organization, and transparency. Democrats ran on these points last year. They ran on providing the best possible for outcomes for all New Hampshire citizens. I’ve been deeply troubled with what I have seen thus far. We pride ourselves on not being like Washington. Let’s not start now. I can only hope some level of responsible leadership returns to Concord and we return to working for the common good.

Richard “Dick” Hinch is the Republican Leader in the New Hampshire House of Representatives, representing Hillsborough District 22, the town of Merrimack. He is serving his 6th term in the House.