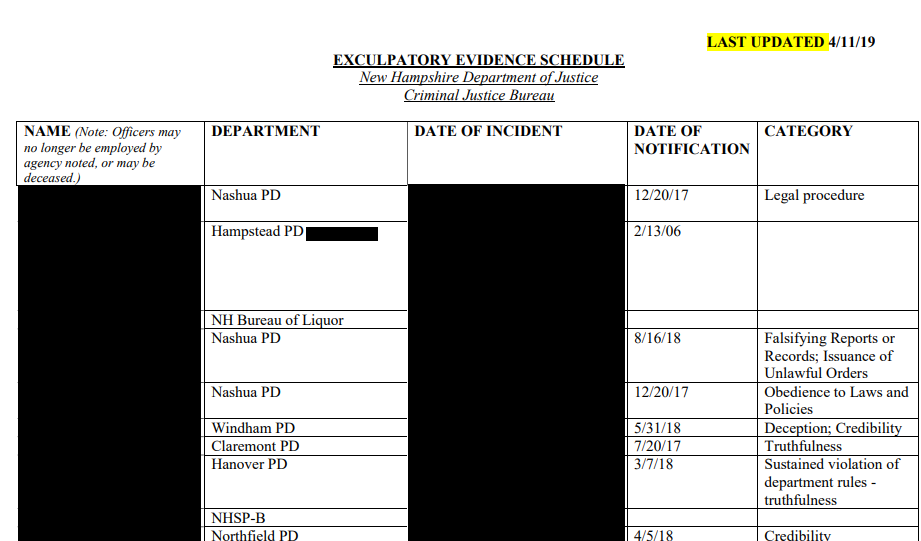 CONCORD – Seven new entries were added to the secretive list of dishonest law enforcement officers and two removed between January and April, according to Senior Assistant Attorney General Geoffrey Ward.

Ward provided no details except to say the changes were made according to protocols that were revised in 2017 and 2018 dealing with the Exculpatory Evidence Schedule, formerly known as the Laurie List. The list now includes 264 redacted names, he confirmed.

Ward refused to release the most recent unredacted EES dated April 11 Friday despite Judge Charles Temple’s order Tuesday in a public records lawsuit that ruled the list is not confidential by law.

The lawsuit is ongoing, Ward said in withholding the unredacted list. “The court did not order immediate production of an unredacted EES,” he said.

Gilles Bissonnette, legal director of ACLU-NH, who filed the suit with the New Hampshire Center for Public Interest Journalism and other news outlets, maintains the unredacted list should immediately be released because of Temple’s ruling.

The media outlets participating in the ACLU-NH public records lawsuit seeking the unredacted Laurie List also include the Nashua Telegraph, the Union Leader, the Concord Monitor/Valley News, the Portsmouth Herald/Foster’s Daily Democrat, and the Keene Sentinel.

Bissonnette, Gregory Sullivan and William Chapman argued for release of the Laurie List saying it is not a personnel record and the public needs the information to hold police and prosecutors accountable.

It appears the two officers who were removed from the list between January and the most recent list of April 11 worked for New Hampshire State Police.

The new entries appear to include officers from police departments in Plainfield, Littleton, Milford, Belmont formerly of Allenstown, Dover, two from Jackson and DCYF Juvenile Justice Service. Because the names and other information are redacted, it is unclear whether some include an additional notification for the same officer.

The state has previously said many officers on the list no longer work in law enforcement.

What happens next is unclear.

Temple’s order concluded: “Accordingly, because the EES is not confidential under RSA 105-13-b and not exempt under RSA 91-a, the Department of Justice’s motion to dismiss is denied.”

The list has been controversial since the public first became aware of it seven years ago. Prosecutors are constitutionally obligated to alert criminal defendants of all evidence in their favor, including police discipline that calls their credibility into question.

Previously, county attorneys kept lists of their local officers. Prosecutors use the EES list to know when the obligation kicks in to notify defendants when  law enforcement officers with sustained findings of wrongdoing buried in their confidential personnel files may testify against them.

The Laurie List – EES – includes law enforcement officers who have been disciplined for dishonesty, excessive force or mental illness.

Ward said an individual who is listed as working for Bedford/DOJ does not work for the Department of Justice.

When asked if his office has noticed any officers who testified in high-profile cases who were not previously disclosed, Ward said the question was unclear.

“Regardless, we cannot comment in response to your question because to do so would require addressing specific officers and cases, when, as we have previously discussed, the law prohibits us from identifying officers who are on the EES,” Ward said.

Ward was asked if the state can guarantee all criminal defendants receive all evidence favorable to them as required.

“We can guarantee that appropriate policies and protocols are in place…,” Ward said. “It is ultimately the responsibility of individual prosecutors to ensure that these requirements are met.”

The Plainfield police department was listed for forgery and truthfulness on the April 11 list, but with no date of notification. It was not on the Jan. 11 list.

Two separate entries were made for officers in Jackson. The dates of notification were both March 19 and both reasons stated: Disregard for constitutional rules and procedures.

One entry for Littleton Police had a recent added date of notification of Feb. 13 for violations of department policies; truthfulness; credibility; credibility and failure to follow police procedure per 2/13/19 letter.

An additional notification was added for Hanover police department that was already listed noting a sustained violation of department rules – truthfulness per 2/15/19 letter.

An officer from Belmont police department, formerly of Allenstown Police Department, listed a date of notification of March 4. And a DCYF Juvenile Justice Service officer was added to the list March 8 for “truthfulness.”

Another new addition to the list was Dover police department with two dates of notification March 13 and March 29 for “excessive force; credibility.”

It was former Attorney General Joseph Foster’s rewrite of the Laurie protocols in March of 2017 that likely prompted the more recent additions to the EES.

Attorney General Gordon MacDonald updated the protocols again in 2018 and made it clear the list would include only officers with sustained discipline in their personnel file. It also provided a road map for officers to be removed from the list.

Asked if any cases have come to his attention that require after-the-fact notification to defendants, Ward said: “No such cases have been specifically brought to our attention.  However, any time an officer’s name is added to the EES, prosecutors have the obligation to review any cases in which that officer was involved prior to his or her name being added to the list, in order to determine if any disclosure needs to be made.”