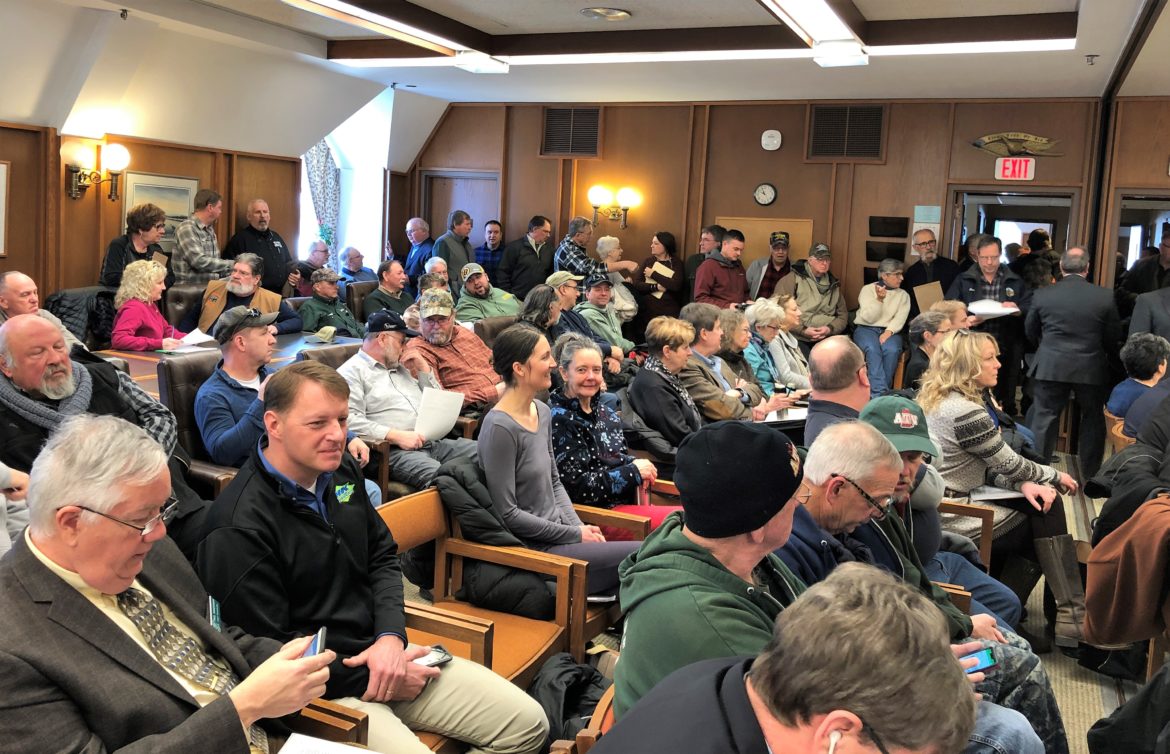 Bills dealing with OHRVs drew large crowds to hearing rooms at the Legislative Office Building in Concord on Tuesday.

CONCORD – Hundreds of North Country residents braved bitter cold, whipping winds and the long drive to Concord to weigh in on five separate bills that could impact the off-road recreational industry some tout as the economic balm needed to rejuvenate their hometowns.

They joined folks in favor and opposed to various pieces of OHRV legislation at packed hearings Tuesday in the Legislative Office Building.

Berlin Mayor Paul Grenier said since 2005 there has been a 30 percent increase in the North Country’s contributions to the state rooms and meals tax, most of it he attributed to the burgeoning Off-Highway Recreation Vehicle – or OHRV craze.

“That’s not chicken feed,” Grenier said referring to the $111-million collected from Coos County restaurants and overnight accommodations, according to the state’s most recent economic data.

More importantly, he said, Berlin property sales records are beginning to show some increase in value after a nearly 20-year decline that roughly corresponds to the gradual shuttering of paper mills and industrial plants.

“This (HB 683) will kill Berlin,” Grenier told the House Recreation, Resources and Development Committee. “Dead,” he added, slapping the desk for emphasis.

HB 683 would provide additional liability protections for abutters of roads where OHRVs are allowed to operate. It would also change the existing law by adding a clause that any change of use by a municipality regarding OHRVs must be approved by two-thirds of the abutters after a 30-day notice.

It also seeks to limit the length of trail connectors on operated highways to a half mile and, if passed, would make OHRV speeding on public roads governed by the Department of Motor Vehicles, not the Department of Fish and Game. As it stands now, a violation of a speeding statue by an OHRV operator does not reflect on the operator’s motor vehicle record.

If passed, this measure would limit the decibel output of OHRVs from 96 to 82, which is the same as snowmobiles. A fiscal analysis reports this could cost the state as much as $1.1 million in OHRV revenue as riders whose manufacturer specifications are not low enough may not want to register their rides in New Hampshire.

State officials estimated it would cost about $200 per state-owned machine or $20,000 total to purchase and install an exhaust modifier to reduce the decibels on their own OHRVs. Local and county governments would have to make similar modifications on their machines.

Although the majority of people who attended hearings and testified opposed HB 683 and HB 498-FN, which were heard in the Resources, Recreation and Development and Transportation Committee around the same time, some voiced support, including sponsor Wayne Moynihan, a Dummer Democrat.

Moynihan sees them as a way to protect the rights of the non-OHRV community to enjoy the peace and quiet of their homes while allowing the OHRV industry to grow and thrive.

He said House Bill 498-FN, which prohibits all OHRVs from traveling on Class V roadways, or local roads maintained and built by local municipalities, goes a long way to protect those folks.

Moynihan said off-roaders should use the trails that are designated specifically for their use and eliminate traveling on residential streets as connectors. He said they should trailer their vehicles to the parks and trail heads, most of which were built and designed with parking places.

Moynihan said the Ride to Wilds network was given “temporary” permission by many local governments to use roads for trail access only until trailer parking areas, such as those at OHRV parks like Jericho Mountain State Park, could be constructed.

“But they want to be able to go from Jericho Park (in Berlin) to Pittsburg,” Moynihan said, adding that the New Hampshire Fish and Game Department has counted as many as 500 to 600 OHRVs a day using the same town roads.

“The people who want to close the roads don’t want OHRVing to end,” Phillips told members of the Transportation Committee. “But (using the local roads) is the taking of a fundamental right to peace and quiet.”

Also supporting both bills was Abby Evankow of Gorham, whose community is involved in a lawsuit about OHRVs. Her primary complaint was the 96 decibel levels and the amount of dust and particulate matter stirred up by OHRVs. These are inhaled by residents who leave their windows open in the hot summer months, she said.

Aside from the restrictions imposed by the potential legislation, the overriding concern, one that was mentioned regularly throughout the day, was the usurpation of local control, always a hot topic in New Hampshire.

Selectman Ray Gorman of Colebrook said his board took the concerns of all those who testified at local public hearings and closed only the local roads that had the vast majority of local support to do so. He said the board recently declined to close a couple of roads whose closure was not supported by local townspeople.

“This is a community thing that needs to stay in the community,” Gorman said.

“This is a huge grab of local control,” said Gorham Town Manager Mark Shea, who said that local police are patrolling the local roads. He added police have no complaints about OHRVs in their community and the town is increasing its enforcement of the OHRV community as needed.

But Coos County Commissioner Rick Samson wants the state to step in because he said local boards are facing extreme and unheard of pressure to comply with the very vocal wishes of the off-roading community.

“Some local communities are abandoning their local taxpayers,” Samson said, citing some unwillingness on the part of OHRV constituents to participate in discussions with those who are adversely affected.

“Consider doing what the local select boards won’t do,” Samson asked of the Transportation Committee members.

The Resources, Recreation and Development and Transportation Committee also heard testimony on three other related but different proposed laws.

HB 660-FN establishes a study committee to evaluate the economics of OHRV impacts in the state and appropriates $500,000 for a report to be issued by Jan. 1, 2021. Opponents support a study committee but oppose funding the through OHRV taxes.

Rep. Jack Flanagan, R-Hillsborough, testified in support of a study committee. Describing himself as a life-long off-roading enthusiast, he said the growth of the use of OHRVs is a state-wide issue that has generally been positive but has seen some “growing pains.”

Flanagan said the committee should include members of the House and Senate, as well as representatives from various stakeholders and the Department of Fish and Game, whose officers police most off-road activities.

There was widespread support for a study committee.

HB 591 makes various changes to the laws governing the operation, registration and required equipment for OHRVs. Those who oppose the other four bills have expressed no significant opposition to its proposed provisions.

HB 592 would mandate that all operators of OHRV’s who are on operated ways have a valid driver’s license, meaning they would have to be a minimum of 16 years old. The current law says they must be 12 years old as long as they are accompanied by a licensed driver who is at least 18. There was support on both sides of that coin with many dedicated off-roaders saying those who travel on local roads should have driver’s licenses.