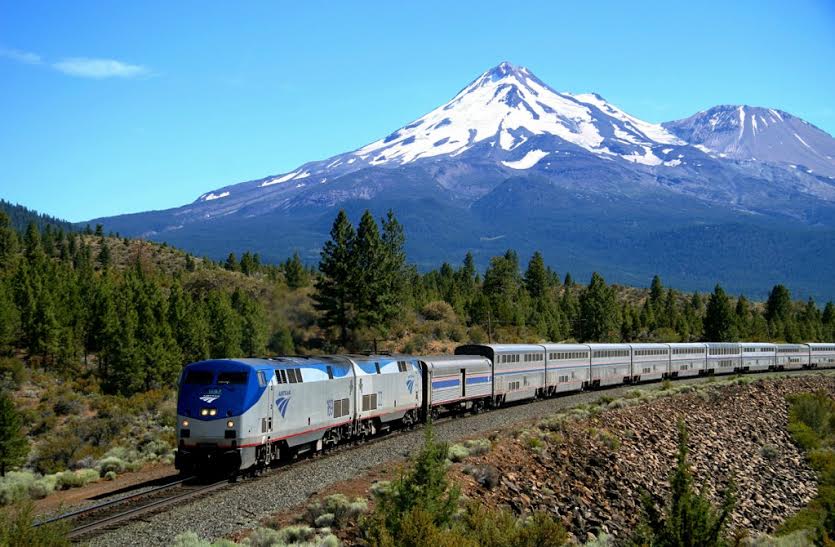 An Amtrak transcontinental train stretching across the landscape -- in this case, the Coast Star Limited. (Amtrak photo) 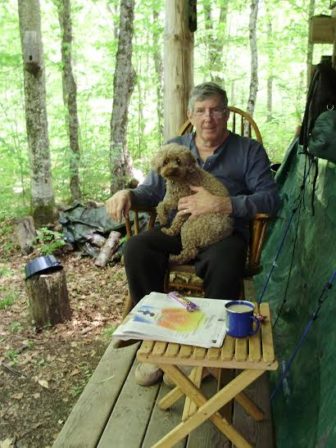 By John Harrigan, View from Above the Notch

The worst part of my recent transcontinental train trip, a wonderful three-night, four-day journey featuring sleeper compartments, good friends from Nashville, a dining car, a bar car, an observation deck, and plenty of hijinks onboard, was the trip back home.

Because I had to fly.

Okay, so this is a rant.

The trip out, by train from Boston to Chicago to Seattle, was pure bliss — ever-changing scenery, great food, plenty of room to lounge around, and an entire train to stretch your legs on. You could visit with passengers from all over, or spread your newspaper out in the lounge car — or just read a book, or head for the shower or take a nap. In your own room.  On your own bed.

Eventually, I’ll get around to writing about that trip, across the West’s northern tier aboard the Empire Builder, one of Amtrak’s four long-distance trains crossing the western half of the continent. One of my longtime goals had been to take at least segments of all of North America’s five transcontinental trains — one in Canada and four in the U.S. — and now I have. 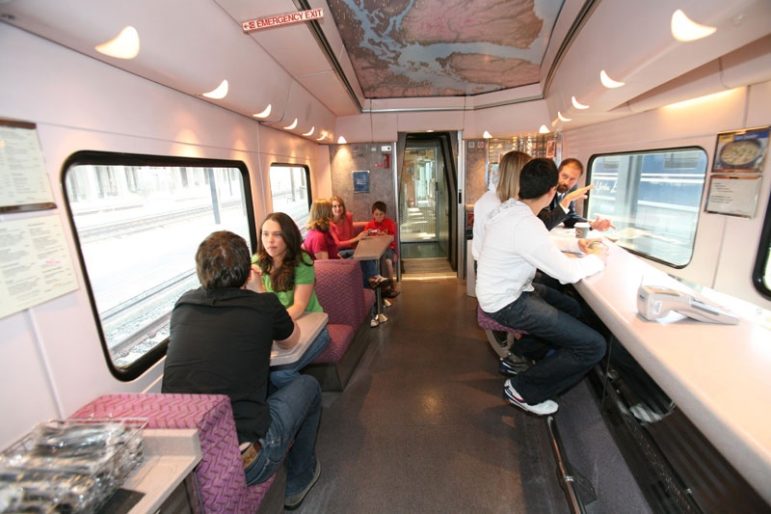 An Amtrak dining car, ready for one of three evening sittings. (Amtrak photo)

But there I was in Seattle, after seven great days of train travel and hanging out at Seattle’s busy working harbor and marketplace, facing the trip home — on an airplane. And I soon regretted that I hadn’t just booked the round-trip by rail.

Now, don’t get me wrong — I have no fear of flying. That’s not it. I absolutely love to fly — in small planes, and particularly float planes, which I’ve done all over the Far North, and even around home, which is, come to think of it, a lot like the Far North.

And there was a time when commercial flight was an adventure for me. I dressed up a little. I thrilled to the raw power of takeoff. “They really put the hammer down,” my longtime camp and hunting buddy Froggie would say, and they do — it presses you right back into your seat, like a ‘50s-era Chrysler with a Hemi-Head engine.

I enjoyed conversations with seatmates and meeting people from all over the country and the world. Seats were roomy and comfortable, with plenty of space to eat, read, visit or sleep. In all my years of commercial flying, there was never any in-flight problem of note, and my luggage got lost just once — and was delivered to my door the next day. I considered all this a minor miracle — thousands and thousands of safe, successful takeoffs and landings day in and day out — and marveled at what this nation’s incredible commercial flight service had become.

Fade to early May of 2016, and one John D. Harrigan, standing there at Gate 14B in Seattle, ready to board an Alaska Airlines nonstop flight to Boston.

Up until then, there had been no reason for a rant. The taxi to the airport went well. Security was not that long a wait at all, and the people doing their jobs with my carry-on and me were pleasant and professional. And getting on board and shuffling down the center aisle was no hassle, and my carry-on went easily into an overhead compartment.

But then I got to THE SEAT.

It was, of course, a window seat, because I like to look out at what’s down there 35,000 feet below, or maybe take a nap. For that, windows are in; your next-door neighbor’s shoulder is out. 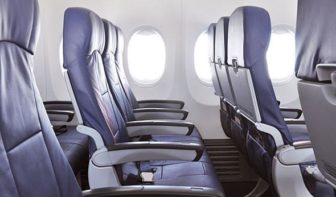 The SEAT: In the background, an airline window seat — five hours of confinement in a seat designed for a chipmunk. (Slate.com)

I side-stepped over there and looked down, and then immediately looked around for a shoe-horn. Surely this could not be my seat. Surely this seat was reserved for somebody in kindergarten.

Now, I’m not a big guy — once almost five eleven, but now around five nine, my usual carrying weight of 170 not far from where it was in high school. In sum, an average guy.

So this seat should be designed for practicality and comfort for an average guy on a five-hour flight, right?

Carefully positioning my small tote bag in the nonexistent space provided for it, I took one last look around at freedom and settled into my seat.

It fit — like a glove. Such a nice glove-like fit that if you wiggled one finger, all of the rest of the fingers would wag with it. There was no way to get comfortable to sleep.

There was barely room to read. I held the book like a chipmunk, with my arms tucked in front of my chest and my little paws clutching the book.

When lunch came, in a box in plastic wrap that required teeth to open, and requiring a certain flailing of elbows to prepare and eat (never, ever get the “Deli Lunch”), I had to do it chipmunk style. I considered eating the carpet, where most of the deli mustard and mayo wound up.

So okay, here’s the rant.

Today’s commercial airliner seats are an absolute insult to the human anatomy, human dignity, basic space needs, and common sense. They are an offence to every sensibility a passenger carries aboard. They suppress freedom of movement, freedom to stretch, freedom to eat. They defy logic. They are the end result of a process and product that treat people like sheep. No, wait — sheep get treated way better.

Sure, I could have paid for a seat with a bit more room, not First Class exactly, but a step up from Coach. But I wanted to fly regular fare, like most everyone else. It had been a long time since I had been in a commercial airline seat, and I wanted to see how it felt.

It felt lousy — absolutely awful. And frustrating. And degrading, and humiliating, and maddening. All those things that make you want to take action, but you can’t.

You cannot, for example, get up and leave and demand your money back as the plane is about to taxi for takeoff.

Well, maybe you can, but someone’s apt to call 911 and you’ll make the nightly news.

So we, the Great Unwashed, are now facing the absolute lowest common denominator when we get onto and – and not just for a pleasure trip, which is a matter of choice, but for weddings, funerals, graduations, reunions, job requirements and new careers, which are not idle trips, but necessities.

A lowest common denominator approach to commercial aviation somehow diminishes us as a nation, whether it’s our attitude toward fast food workers’ wages or seats on a transcontinental airplane. Nobody ever asked me in this ever-more-tiresome minimum wage dispute, but I would cheerfully cough up a buck or two more for my occasional Big Mac meal if I knew, for sure, that it was going to the entry-level or elderly workers out there behind the curtain of Oz.

And I’d cheerfully pay a few bucks more for airfare if I knew that the money was going to the people handling the baggage and keeping the airplane clean and safe to fly — and for a seat designed for something more than a chipmunk.