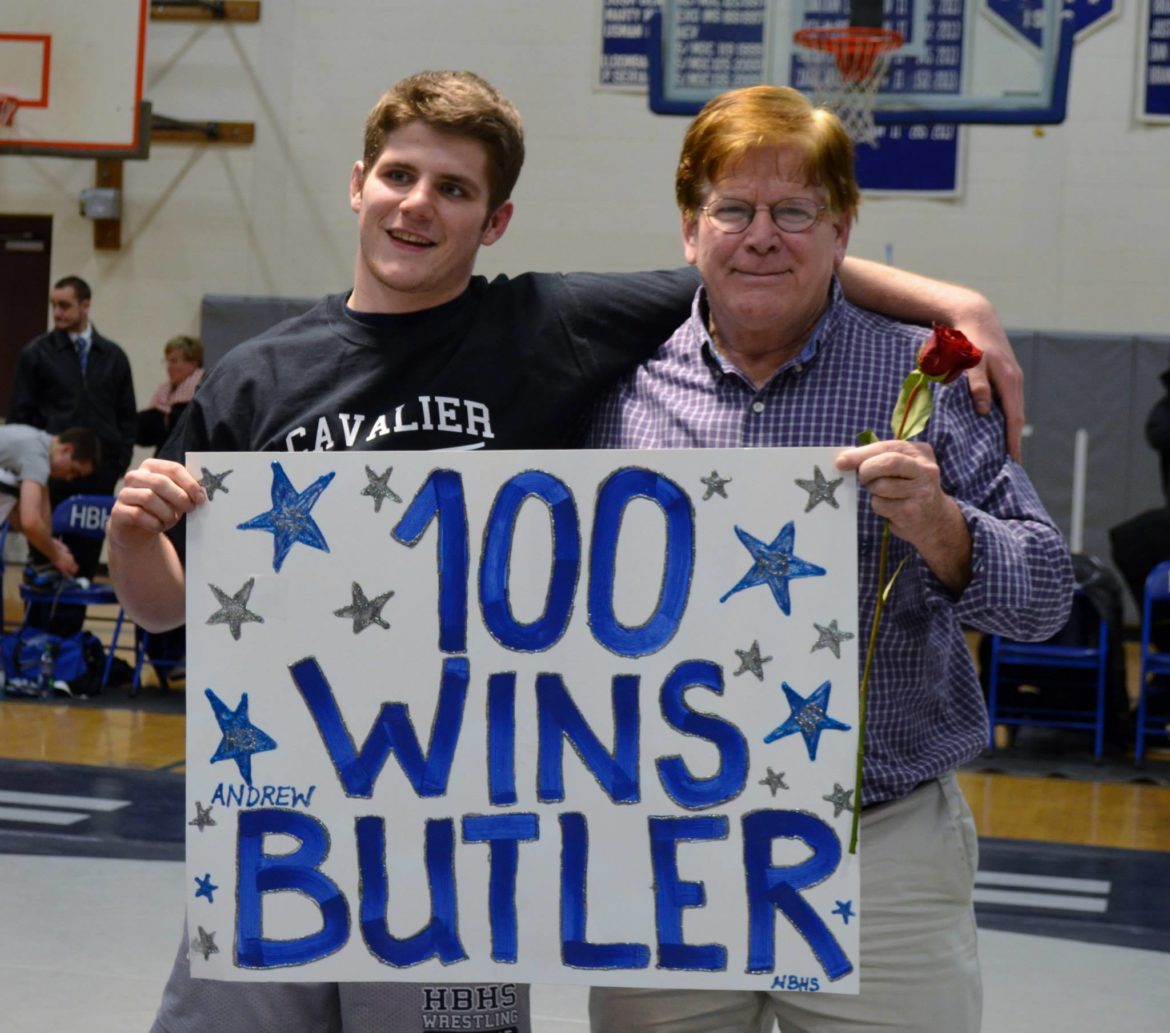 Andrew Butler, left, is pictured at Hollis High School in February 2015 with his father Douglas Butler. Andrew excelled in wrestling and football.

Update: On Thursday shortly before noon, the NH House voted 183-158 against a Senate amendment that would have changed HB 1565. The bill as it stands now requires the Department of Corrections to seek to have the Secure Psychiatric Unit accredited as a psychiatric hospital.

The state’s position that a 1986 Supreme Court ruling allows locking up mentally ill people who haven’t committed a crime in the Secure Psychiatric Unit at the men’s prison in Concord is being challenged by attorneys and advocates.

The practice – which is unique to New Hampshire – caused an uproar in Hollis recently after townspeople learned that Andrew Butler, 21, a popular former high school star athlete has been held at the prison psychiatric unit since last fall even though he isn’t charged with or been convicted of a crime.

“The State believes that the Champagne case allows civil committees to be treated at the SPU,” Edwards said. She declined to comment on the Butler case.

Veteran defense attorney Paul Twomey insists the state Supreme Court’s decision focused only on treatment at the unit. It didn’t address whether it is constitutional to incarcerate someone there who hasn’t committed a crime, Twomey said.

“What the court specifically didn’t reach in the Champagne case was the due process question – is it fundamentally fair to keep someone in a prison setting when they have committed no crime. The court didn’t reach the question in that case,” Twomey said.

Twomey, who has represented people who have been incarcerated in the state prison and its Secure Psychiatric Unit over the years, said it is simply wrong to keep people locked up in prison for being mentally ill.

Mentally ill people are transferred there from the New Hampshire Hospital, the state’s psychiatric hospital, if they are deemed a danger to themselves or others and can’t safely be housed at the psychiatric hospital. They are then housed with mentally ill people who have been convicted of crimes and others who have been deemed not competent to stand trial and found not guilty by reason of insanity.

Dana Champagne was deemed incompetent to stand trial in the murder of his parents and sent to the Secure Psychiatric Unit.

The 1986 Champagne decision said: “The final issue presented for our review is a constitutional one: whether the petitioner’s equal protection or due process rights were violated in this proceeding for involuntary commitment. We hold that the due process issue was not properly raised below and, therefore, will not consider it.”

The due process question is at the heart of a writ filed two weeks ago in federal court by Andrew Butler’s attorney Sandra Bloomenthal demanding he be immediately moved out of the prison because he hasn’t committed a crime.

Andrew Butler is being denied his “right to due process of law by the State holding him indefinitely in a maximum-security prison,” attorney Bloomenthal wrote. “He is not being treated by an accredited hospital for his mental illness and in fact his treatment is harmful and cruel and violates the Americans With Disability Act.”

“He is held as a mental health patient without being in an accredited hospital, denied contact visits with his father, denied contact visits with his attorney, forced to wear prison clothing,” wrote Bloomenthal. “He is locked down 23 hours a day. He has been tasered. The treatment he has received is cruel and unusual punishment without having been convicted of a crime and with no pending criminal process.”

A structuring hearing in Andrew Butler’s case has been scheduled for May 24 in U.S. District Court in Concord. The state hasn’t filed a response yet.

House Bill 1565 was amended in the Senate last week to allow the Department of Corrections to seek prison accreditation of the unit instead, but Cushing hopes that amendment will be reversed. Update: On Thursday just before noon, the House voted 183-158 against the Senate amendment so the bill now requires the Department of Corrections to seek to have the Secure Psychiatric Unit accredited as a psychiatric hospital. It will now go to a committee of conference.

Cushing said after the vote: “Glad House voted to reject Senate amendment that stripped out findings and downgraded from a psychiatric hospital to prison behavior unit.”

Earlier, Cushing said, “I think it is clear the state needs to go back and read the Constitution and look at how it is treating people with mental illness who haven’t committed a crime and have been sentenced to serve time in SPU.”

Andrew Butler’s father, Douglas Butler, said his son was a terrific student who went on to Worcester Polytechnic Institute before having problems last summer. His son had some interactions with Hollis police because of his recent mental health issues, but any criminal charges were dropped, Butler said. Andrew would run from police because he was frightened, Butler said.

Butler believes his son had a bad reaction while experimenting with illegal drugs during a visit to Vermont last summer. He also believes the drugs his son is now prescribed make him worse, but he has no input on his son’s medication because the state removed him as Andrew’s guardian, Butler said.

“He’s well respected and loved,” Butler said, adding Andrew is heartened by the support shown him from the people of Hollis who have raised money for his defense. More than 1,000 people have signed a petition to free Andrew.

Nurse Beatrice Coulter said in the Champagne case, the due process rights provided for in the Fourteenth Amendment were not ruled on by the court as it was “not properly raised.”

Coulter became an advocate for mentally ill people and an outspoken critic of the Secure Psychiatric Unit after working there for only a few days. She and Wanda Duryea co-founded Advocates for Ethical Mental Health Treatment.

“The habeas corpus now before the federal court alleges a Fourteenth Amendment violation,” Coulter said. “We look forward to the court’s ruling.”

State Sen. Kevin Avard, R-Nashua, who has listened to legislative testimony from people who have loved ones at the Secure Psychiatric Unit, said it sounded like something out of a “horror movie.”

“I am very concerned for (Andrew Butler’s)  welfare and will be inquiring further into his situation.  I mentioned him on the Senate floor to bring it to light,” Avard said. “The public needs to know SPU situations could be much better and may need reform.”

“Mental illness is not a crime and those who suffer from it need better treatment and should not be  treated as a  criminal,” Avard said.