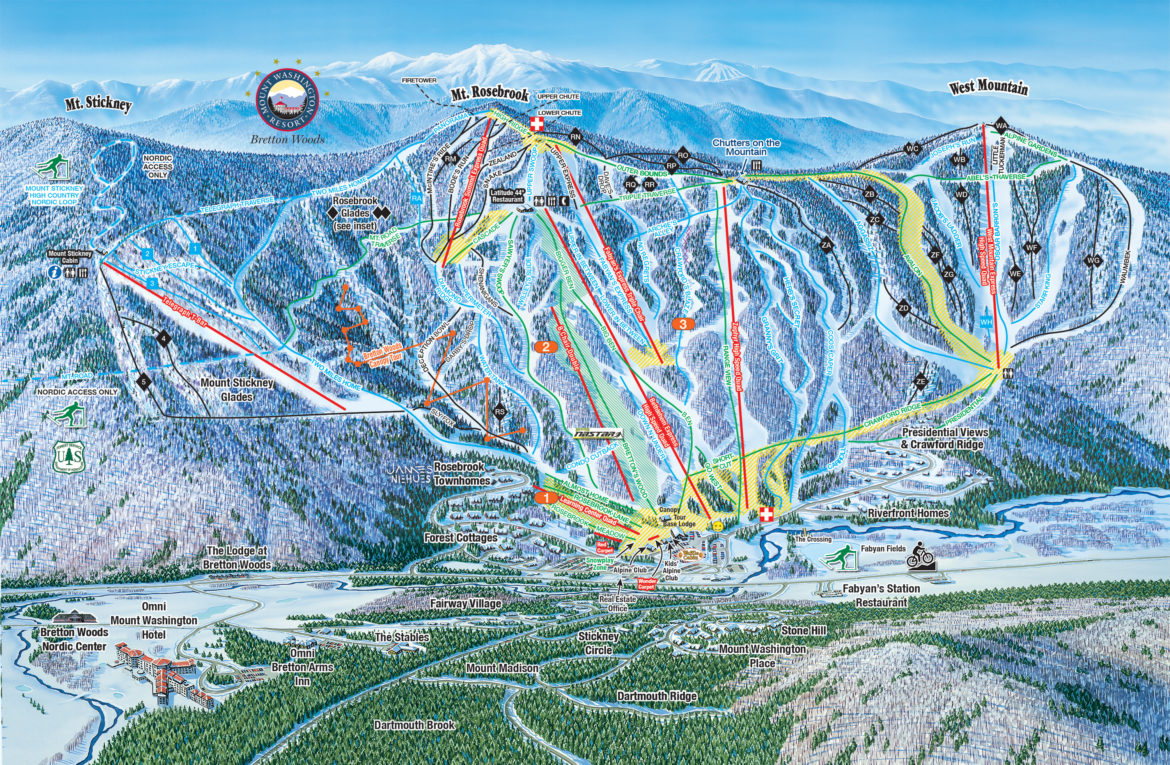 The gondola will run from near the main building at the base to the top of what is now Fabyran's Express Triple Chair.

Ellms said the resort wants to attract more customers during the off-season as well as getting skiers up the mountain more quickly and providing them with a new facility offering meals and restrooms.

The goal is to have the gondola operating by next winter with the new building opening in the summer of 2019, he said.

Officials say the building will be tucked just below the ridgeline and will use heavy timber and stone to fit into the landscape. Drawing courtesy of Bretton Woods.

There will be 36 cabins on the gondola, each capable of carrying eight passengers, Ellms said. It will take about five minutes to cover about 6,000 feet from near the main lodge to what is now the top of the Fabyan’s Express Triple chairlift.

The top of the Fabyan lift will be moved down the slope about 150 feet. The gondola will cross over the Bethlehem Express chairlift.

The only other ski gondola in the state is a four-passenger model at Loon, although Cannon Mountain operates an 80-passenger cable car.

Ellms said the building will have classic mountain views but be tucked down just below the ridgeline “to soften the view” from the valley.

It will be two stories involving about 11,000 square feet and “consisting of heavy timber, stone, fitting into that environment.”

Ellms said the gondola will allow diners, people attending meetings and wedding parties to reach the facility regardless of the weather.

The draft plan shows 149 seats for dining on the first level, 106 on the second level and about 30 seats for private dining.

“What we are proposing is it is not all about skiing, it is what the resort is about which is four seasons,” Ellms said.

Being able to draw customers during the off-season has become an important strategy for all ski resorts, said Jessyca Keeler, the executive director of SkiNH, a statewide trade association. But the investment also shows the vibrant health of the state’s ski economy, she said.

Ellms estimated the cost of the gondola and building at about $15 million. But he said the plan and finances are still being worked out.

The meeting Wednesday night was a “conceptual” presentation designed to give the planners an informal overview before the final plans are presented. The project also still needs some state permits.

The ski area as well as the nearby Mount Washington hotel is owned by Omni Hotels & Resorts.