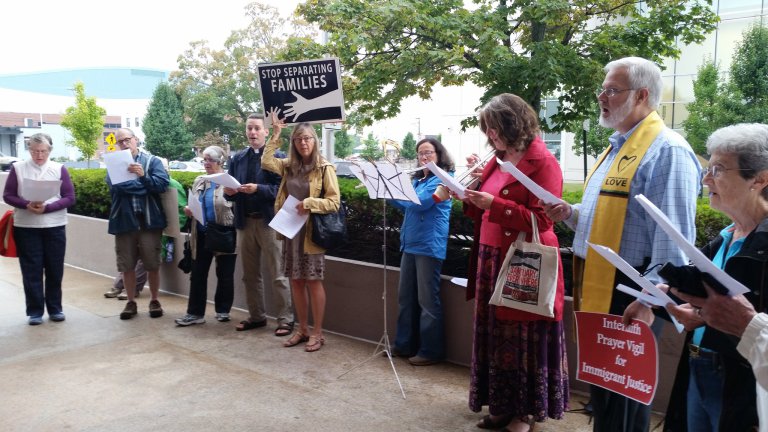 MANCHESTER – Buoyed by a federal court decision putting a halt to the imminent deportation of about 60 Indonesian immigrants, members of area religious congregations will return to the Norris Cotton Federal Building on Tuesday October 3 to pray for a halt to all deportations. The vigil comes on the heels of a victory for the interfaith coalition, after an order issued on September 26 by Judge Patti Saris of the United States District Court in Boston halted plans to deport 11 Indonesians.

The decision applies not only to the named plaintiffs, but to approximately 50 other Indonesian immigrants.

“We are called to continue our prayers for a halt to the deportation machine, which is tearing apart families, congregations, and communities,” said the Rev. Tim Roser, Associate to the Bishop, New England Synod, Evangelical Lutheran Church of America.

The interfaith prayer vigils began on June 6, coinciding with scheduled appointments that dozens of immigrants had with officials of Immigration and Customs Enforcement (ICE), the federal agency responsible for immigrant detention and deportation. Such appointments are typically held on the second Tuesday of each month.

Prior to the Trump administration, these appointments took place on a more or less annual basis for immigrants who had “orders of supervision” from ICE.  Since then, immigrants have been ordered to return to ICE with greater frequency. Starting on August 1, many of the immigrants were told to return with plane tickets to their countries of origin or risk getting jailed and forcibly deported. Since then, prayer vigils have also been held outside the federal building on each day the faith-based activists knew of anyone needing to report to ICE.

The October 3 vigil will be the 11th to take place since June. The vigils have attracted anywhere from a couple dozen to a few hundred prayerful protesters. Participants have included local and regional leaders from a variety of faith traditions. The vigils are coordinated by the Granite State Organizing Project, American Friends Service Committee, and Untied Valley Interfaith Project.

The vigil will begin at 8:30 AM with prayers, songs, and a “Jericho Walk” around the building.  “According to the Hebrew Bible, it was prayer that brought down the walls of Jericho,” said Father Joseph Gurdak, pastor at Saint Anne-Saint Augustin Parish in Manchester. “Today, we are praying for the walls of injustice, intolerance, xenophobia, and racism to come crumbling down.”

The Indonesians fled from religious persecution about twenty years ago, explained the Rev. Sandra Pontoh of Indonesian Community Support in Dover. Since then, they have been living, working, and raising families in the Dover-Rochester area. “We are hopeful that the courts will put a total halt to the deportations, which are tearing our community apart,” she said.

Others swept up in the deportation surge include people from Brazil, South Sudan, El Salvador, and other countries where violence and extreme poverty have forced people to leave their homes and come to the United States to try to make a better life for themselves and their families.