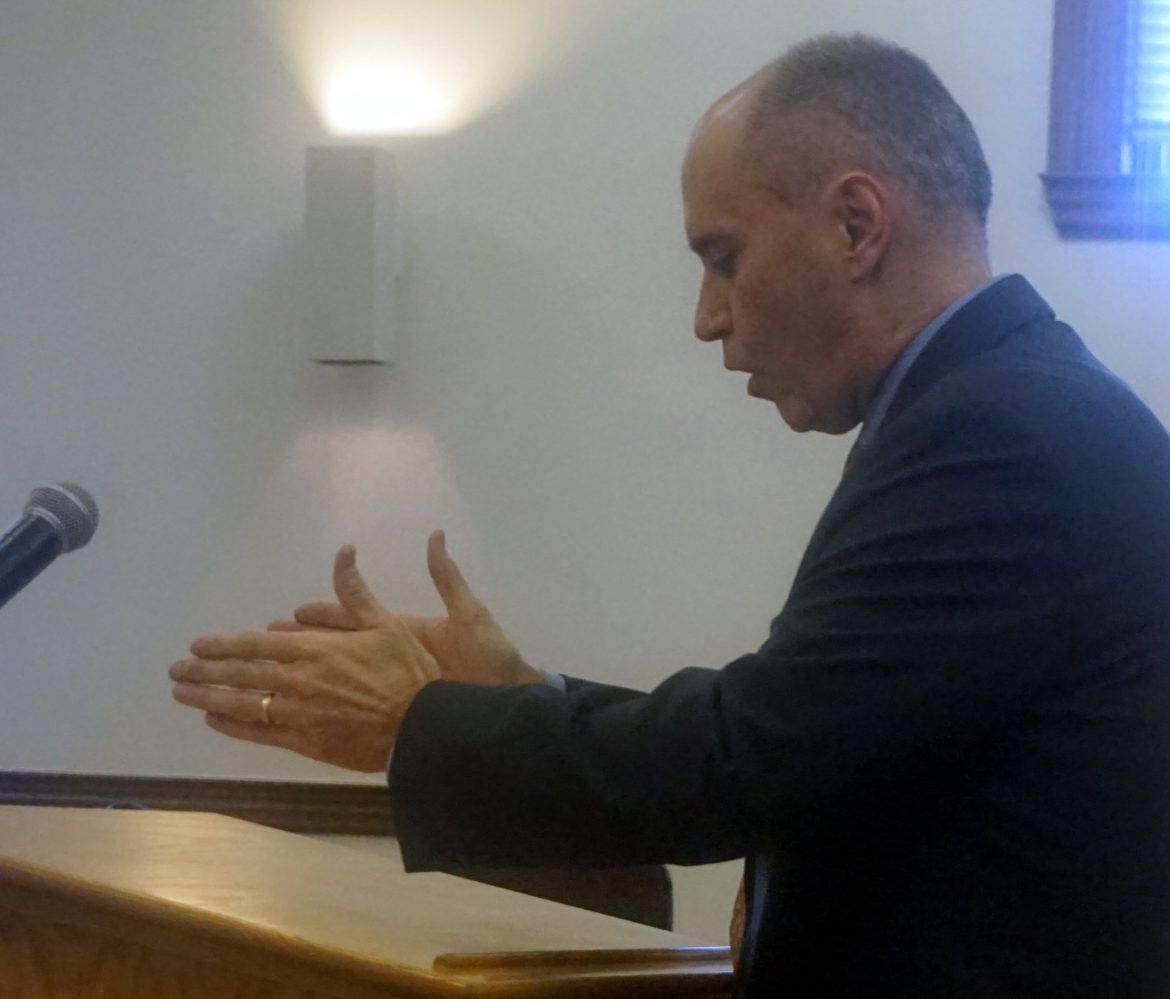 CONCORD — Attorney Tom Reid says Attorney General Joseph Foster’s failed attempt three years ago to remove former Rockingham County Attorney Jim Reams started with a complaint from an attorney who was leaving the office and was worried that her boyfriend was about to get fired.

Reid, who was Reams’ deputy county attorney at the time, has been trying since Nov. 6, 2013, to find out what evidence Foster relied on when he locked Reams out of his Brentwood office that day.

Reid was also suspended that day although he was never under investigation and later resigned. Reid, who practices in Concord, last month won a Supreme Court appeal of his right-to-know lawsuit seeking the unredacted version of Foster’s investigation into Reams.

Reid was back in Merrimack County Superior Court in Concord on Friday for a status conference to determine how Judge Diane Nicolosi will review the 7,000 page investigation and decide what should be released to the public. She asked Reid to summarize what happened in the Reams case.

Reid told Nicolosi that he became aware of a woman employee’s concerns about feeling uncomfortable around Reams through her boyfriend and the county fully investigated 18 months before she complained to the attorney general.

“Time goes by — a year and a half — and the employee is about to leave county employment at about the same time, in my view, that her boyfriend is in trouble for some misconduct in the courtroom for using a gross homophobic term …,” Reid told Nicolosi.

“Part of this becomes, I want to make sure my boyfriend doesn’t get in trouble,” Reid said. Reid didn’t identify the attorneys by name.

The Supreme Court ruled that Foster couldn’t redact information claiming it was exempt under the right-to-know law as a personnel matter because Foster wasn’t Reams’ employer. County attorneys are elected in New Hampshire.

Foster had accused Reams of an ethical violation, financial mismanagement, and gender discrimination in a complaint for removal. After an extensive investigation, no criminal charges were filed and five months later, Judge Richard McNamara ordered Reams back to work.

Reams retired in June of 2014 after the Rockingham County Commissioners agreed to pay him through the end of his term. Foster has since approved a $30,000 payment to Reams and his lawyer for legal fees incurred while he fought the allegations, which he denied.

Assistant Attorney General Frank Fredericks told Nicolosi the Supreme Court’s ruling means his office must release more of the substantive complaints made against Reams. The redacted investigation that has been released includes the names of the people who were interviewed during the investigation, but what they told investigators was redacted.

Fredericks suggested the state now redact the names of the interviewees and release what they said, but only after shifting placement in the documents so the statements couldn’t be matched up with their names and there would be no way to identify them.

Reid objected saying the people who were interviewed have no expectation of privacy and he opposes another lengthy re-redaction campaign.

Associate Attorney General Anne Edwards said the redaction process won’t be easy because many of the people who were interviewed provided personal details.

Reid restated his concerns about the investigation.

“Does the attorney general remove an elected official because someone said a year and a half ago that (Reams) made a comment that made me uncomfortable and I also heard that 12 years earlier he made a comment to someone else that didn’t bother her, but having heard about it now, it bothers me. Is that something the attorney general based the removal of the county attorney on?” Reid asked.

The public has a right to know if the attorney general has grossly exceeded his authority, Reid said.

“Was an elected official removed on less basis than is required to conduct a traffic stop? I think that’s what you are going to find out,” Reid told Nicolosi.

Nicolosi said she would look at three interviews from the investigation to start, including Jackie Docko’s and Amy Connolly’s. She said the attorney general’s office could pick a third one for her to review, either for Stephanie Callahan’s or Karen Senecal’s interview.