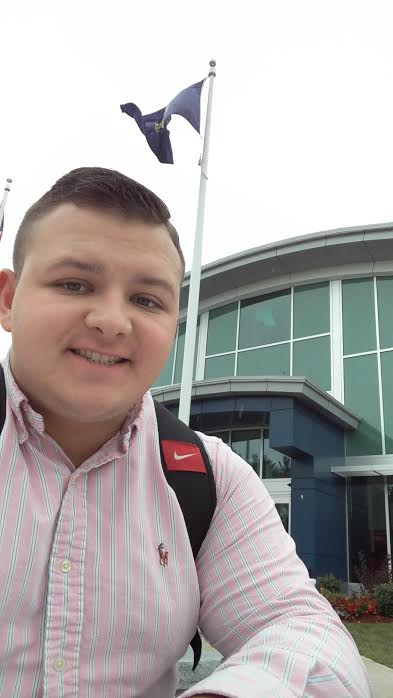 I dragged myself into my morning algebra class and while shuffling though the aisles to take a seat, my backpack whipped my classmate’s coffee off her desk.

I do not know this girl very well. She seems nice, but how will she respond? I’ve only spoken to her once or twice. I know she always laughs at the teacher’s Coast Guard stories. They are meant to be humorous, but would she think her coffee being spilled in the morning was entertaining?

I heard her speak, more of a shocked utterance. “Oh my God,” followed quickly by a few muttered curse words. When I turned around, I witnessed the hot dark brown puddle I had created.

The class erupted in laughter. They thought it was funny, but what about her?

The hot coffee had spilled on her white blouse leaving an indelible stain. What didn’t land on her blouse made its way down her black leggings and onto her pristine Ugg boots.

I was still in an early morning daze. “Uh, I’m sorry.”

Her faced turned red. It was clear that I had ruined her morning. “It’s fine,” she shot back and briskly exited the class to grab some paper towels.

I quickly followed her, also searching for something to clean up the mess. When I returned I said, “Don’t worry, I’ll pick it up.”

She was softening, finally. “That’s so kind of you. But I can do it,” she replied.

“The least I can do is help, or maybe I can buy you another one tomorrow,” I offered.

My offer to make amends was so politely declined and I could do nothing to compensate for the coffee. I felt embarrassed.

My clumsiness was an unforeseen variable. There was no known equation in my first-year algebra universe with which to compensate and certainly no solution in sight.

However, I do understand that life moves on and we must always view the glass as half full even though her coffee cup was now way more than half empty and had just finally stopped dripping down her leg.

The next time I saw her in class, I shuffled through the desks the same as I always do, but this time no coffee was lain waste. She was in her regular seat. I had to say something – and fast.

“We may not be in statistics class, but it’s there’s a high probability that I could knock your coffee over today.” I gave a bright white smile. She laughed and swiftly moved her coffee as far away from me as possible.