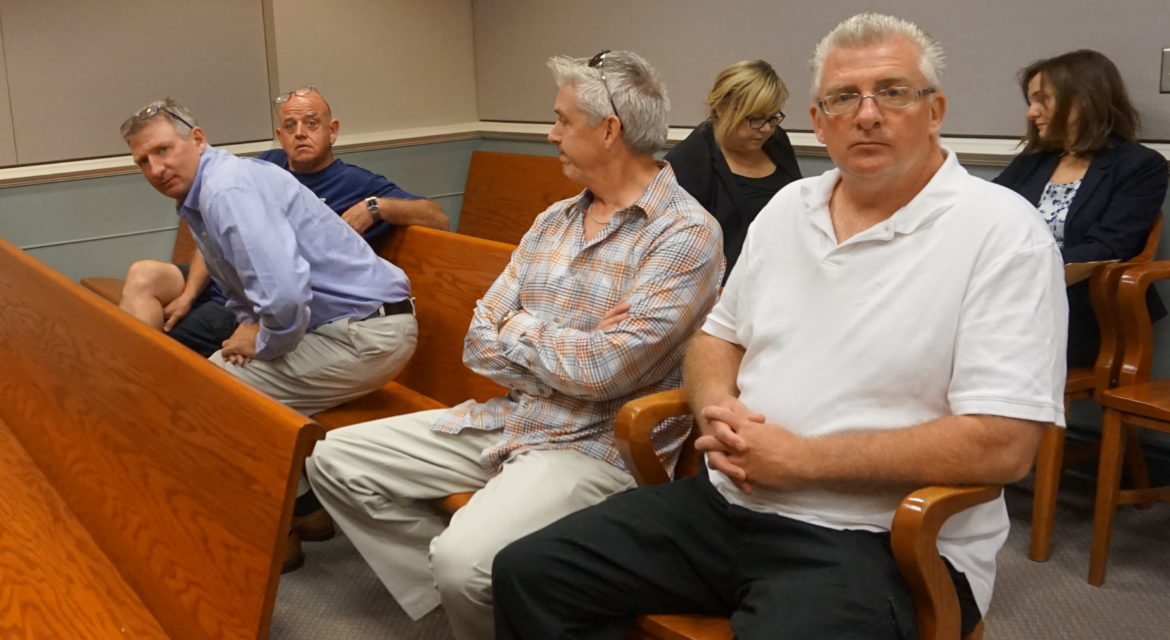 Eric Largy was reunited on Tuesday with his brother and uncle for the first time in seven years at a hearing in Hillsborough County Superior Court South in Nashua. From left, uncle Daniel Largy, brother Joseph Largy, friend Tom O'Brien, and Eric Largy.

NASHUA – It was a family reunion of sorts for Eric Largy on Tuesday as his brother Joseph Largy and uncle Daniel Largy asked a judge to remove their names from a no-contact order so they can help him and keep track of his case.

Largy, who hadn’t seen any family members for seven years while he was locked up in state custody after allegedly beating his father, retired Nashua Police Chief Clifton Largy, received more good news at the hearing in Hillsborough County Superior Court South as well.

Judge Charles S. Temple approved of Largy’s brother and uncle having contact with him and denied the prosecution’s motion to jail Largy for six months for contempt for allegedly not fully participating in a recent court-ordered competency evaluation.

The results of Dr. Shannon Bader’s evaluation could mean the case against Largy comes to an end. If Dr. Bader finds Largy incompetent to stand trial and unrestorable, the recently refiled criminal charges will be dropped and Largy will be a free man, according to public defender Michael Davidow. He represents Largy with Suzanne Ketteridge.

“If not competent and (he) could be restored, the case is essentially continued to see if he gets better,” Davidow said.

Largy, 49, was re-indicted on May 17 for allegedly beating his father seven years ago in a highly publicized case in which police said Eric tortured his father for 12 hours and restrained him with duct tape in an antique barber’s chair. Eric has maintained that he was defending himself that day from a father who abused him all of his life, allegations Clifton Largy denies.

Clifton Largy previously told InDepthNH.org that Eric lured him to his home on April 22, 2009, and attacked him from behind. Clifton Largy suffered broken facial bones and eye sockets.

The no-contact order remains in place relative to Clifton Largy, who could not be reached for comment on Tuesday.

After the incident with his father seven years ago, Eric Largy was deemed incompetent to stand trial at the insistence of the state. After serving 18 months in Valley Street Jail awaiting trial, the original criminal charges were dropped and Largy was involuntarily committed for five and a half years at the Secure Psychiatric Unit at the state prison for men.

He was transferred to the New Hampshire Hospital and discharged on Aug. 1 after the state failed in its attempt to have him locked up for another five years claiming he still suffered from delusional disorder and had largely refused treatment.

Four of the same psychiatrists who testified that Eric Largy was always well-behaved while at the Secure Psychiatric Unit also testified that he posed a danger if released, but dangerousness was never proven in Probate Court and Largy was described as a perfect gentleman who helped weaker patients and inmates.

“In terms of the motion for contempt, we had a discussion up at the bench in terms of Dr. (Shannon) Bader and her meeting with you and her review of your extensive records and she’s going to be able to issue an opinion without a further meeting with you,” Judge Temple said. “So I am going to deny the motion for contempt and I am not going to order you to do anything further at this point.”

Assistant Hillsborough County Attorney Michele Battaglia had filed the motion seeking to jail Largy for contempt. Largy physically appeared at his evaluation, she wrote in her motion. “However, he did not agree to participate in the evaluation or answer any questions other than apparently to provide a written statement and a short verbal statement to Dr. Bader,” Battaglia wrote.

Temple said he expects Dr. Bader’s report to be completed by mid-September, but is due no later than Oct. 11. He scheduled a status conference for Oct. 6.

After the hearing, Eric’s brother Joseph Largy was critical of treatment at the Secure Psychiatric Unit and the state’s handling of the case.

“Trying to try him now doesn’t make any sense to me,” Joseph Largy said.

Joseph Largy and Daniel Largy were each called to a podium microphone during the hearing as Judge Temple questioned them before allowing them full contact with Eric.

“Just for the record, that’s the best soup around,” Temple said.

Davidow asked that Eric Largy be allowed to retrieve his belongings from property owned by his father with the help of Daniel Largy.

Assistant Hillsborough County Attorney Battaglia said she would check with Clifton Largy and get back to the court and the defense. “That may be fine,” Battaglia said.

Eric Largy said he was pleased to see his family members at the courthouse, but was concerned at first because they were still on the no-contact list until Temple amended his bail order.

“I’m just glad we are getting to a place where we can have better communication,” Eric Largy said. “It’s just getting old, getting ridiculous.”
Largy said he plans to speak out publicly in the future about his treatment at the Secure Psychiatric Unit where he was held for five and a half years.

“I’ll advocate down the road for all the people left behind (at SPU),” Largy said.

The Secure Psychiatric Unit is run by the Department of Corrections on the grounds of the state prison. It has come under fire for housing civilly committed patients from the New Hampshire Hospital, the state’s psychiatric hospital, who haven’t committed a crime.

Largy’s friend Tom O’Brien also attended the hearing and was critical of the state.

“I want what’s best for him,” O’Brien said, adding Largy needs some type of compensation.

“They released him and kicked him to the curb. He needs his blood pressure medicine,” O’Brien said. “They deem somebody incompetent, take away their rights, then kick them to the curb.”