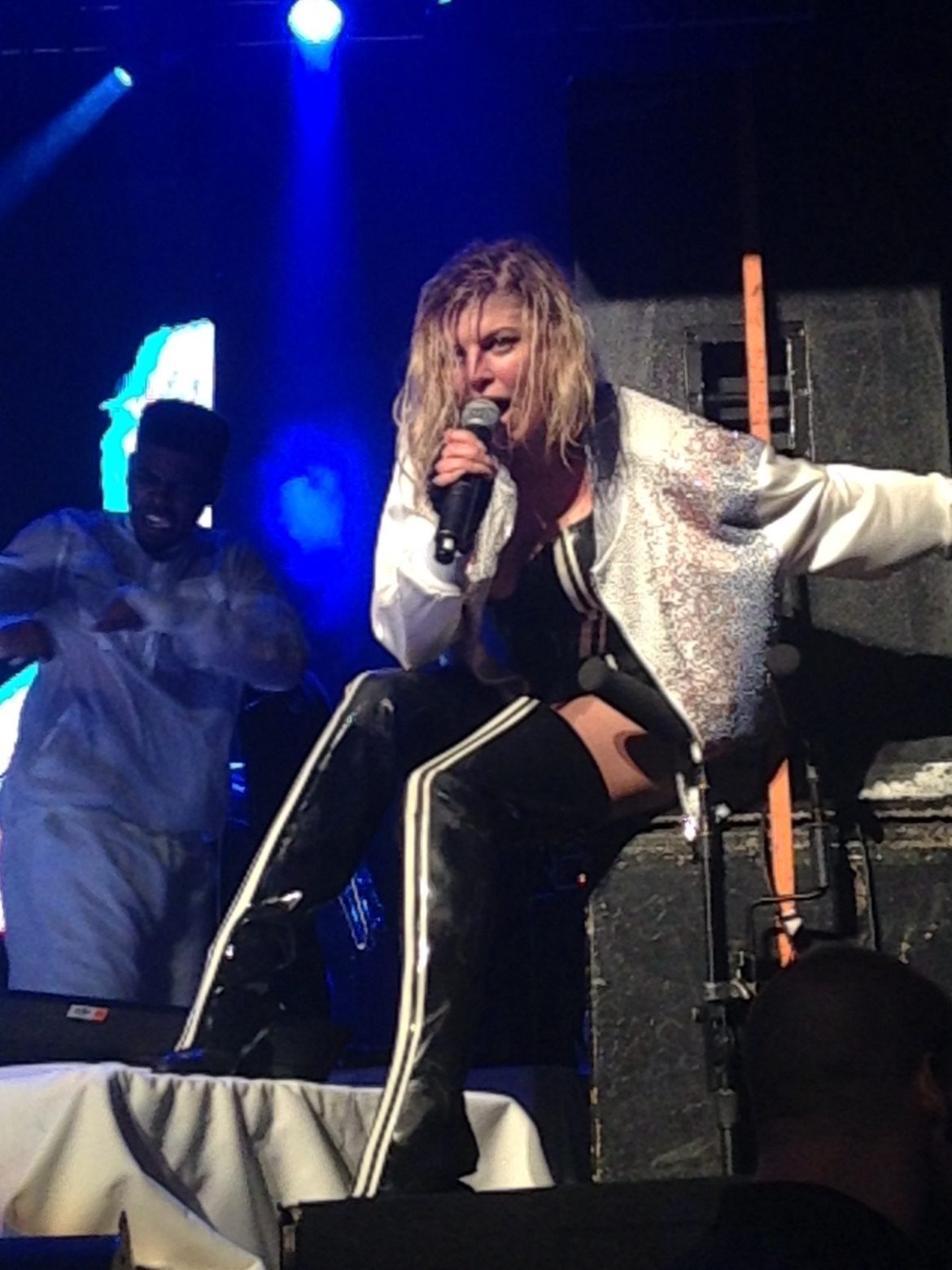 Fergie performed after the DNC at the Electric Factory in Philadelphia for a VIP crowd.

The klieg lights were on full strength Wednesday at a star-studded lunch highlighting obesity treatment and, later, a Fergie concert, both put on by the Creative Coalition — with help from pharma giants like Novo Nordisk — on the third day of the Democratic National Convention.

“I think you couple the artistry with celebrity to create a commodity and currency that has tremendous value to raising awareness and advancing the agenda of whatever cause we are backing at that time,” said actor William Baldwin, the former president of the Creative Coalition, an entertainment industry advocacy group that focuses on social issues as well as those affecting its members.

And the celebrities certainly turned out in force for both events, including actress Ashley Judd, Reid Scott of Veep, Diane Guerrero of Orange is the New Black, Troian Bellisario of Pretty Little Liars, Dean Norris ofBreaking Bad and Elizabeth Banks of Pitch Perfect, who had a big role at the convention on Tuesday.

Spotted in the concert crowd in Philadelphia’s legendary Electric Factory were Sen.Bob Casey (D-Penn.), host committee chair and former Gov. Ed Rendell and The Newsroom‘s Alison Pill. Taboo, from Fergie’s former pop group the Black Eyed Peas, even joined her onstage for the encore of “I Gotta Feeling,” even though the band played its own concert the same night at the Fillmore for Rock the Vote.

All guests at the invite-only performance walked a red carpet, but only VIPs were admitted upstairs to enjoy a private bar and view of the show from above. Fergie took the stage after 1 a.m. and played for nearly two hours, dropping an endorsement of the party nominee between club favorites such as “London Bridge” and “Glamorous.”

“Hillary Rodham Clinton is a mom I’d like to follow, so this one’s dedicated to her,” Fergie announced before launching into her new single “M.I.L.F.” (While the acronym’s “M.I.L.” do stand for “mom I’d like to,” the “F” does not typically stand for “follow.”)

The healthcare industry was responsible for the lion’s share of the concert’s sponsors; besides Novo Nordisk, the big names included Abbott Laboratories,AmerisourceBergen, Novartis, and Pfizer. All have a history of generous political giving, with most making $1 million or more in direct contributions so far this cycle, and all are active in lobbying on healthcare issues.

The energy industry was also well-represented, with Edison Electric Institute, theNuclear Energy Institute and Southern Company on the sponsors’ list. Other companies that put up to make the event happen: the National Association of Real Estate Investment Trusts, railway company Norfolk Southern, political consulting group Shorr Johnson Magnus, law and lobbying giant Squire Patton Boggs and tech companies InterDigital and eBay. Just one individual was named as a sponsor — Renee Cafaro, a freelance political consultant without a history of big campaign contributions, though she has given nearly $18,000 to candidates in this cycle. She is also the sister of Ohio State Sen. Capri Cafaro.

Panelists and actors from Pitch Perfect, Breaking Bad and Orange is the New Black pose at a fundraiser for obesity treatment. (Ashley Balcerzak/OpenSecrets)

And at lunch, a word from our sponsor…

Earlier in the day, Novo Nordisk and the Creative Coalition teamed up to present a lunchtime panel discussion on obesity treatment. Featured were a former mayor of Nashville and director of Harvard’s Institute of Politics; a retired major general in the Army; a patient advocate; a business nonprofit focused on health care; and a doctor at the National Center for Weight and Wellness. The group held a similar seminar in Cleveland last week.

As it turns out, the Danish pharmaceutical power has a big stake in the matter. Panelists praised the use of weight loss drugs and stressed the importance of getting other doctors and medical providers to buy in — and Novo Nordisk produces Saxenda, an injectable weight loss drug for people with a body mass index greater than 27 (about 20 percent overweight), approved by the FDA in 2014.

“We have a couple of others in our pipeline, but they’re years away from consideration,” said Ken Inchausti, director of branding at Novo Nordisk. A 2015 report shows at least four compounds that target obesity are currently being developed.

So it wasn’t surprising, perhaps, that at the close of the panel, the corporate vice president of Novo Nordisk took the stage with a call to action.

“We need help from the policy makers in the room to support the Treat and Reduce Obesity Act,” Curt Oltmans said. “We just wanted to make you aware of that.”

One of the things the proposed legislation does? “Authorizes HHS to cover. under Medicare part D, medication for treatment of obesity or for weight loss management for an overweight individual with one or more related comorbidities,” reads the bill summary.

The firm mentioned that particular bill at least 13 times in 2015 and 2016 lobbying reports, according to an OpenSecrets analysis. The firm has reported spending $1.6 million on lobbying activities through June 30 of this year, putting it on track to top the more than $2 million it spent in 2015.

The obesity bill appears to need a nudge to get it moving. It has been introduced in Congress more than once but has never moved past the committee level.

“Our efforts are focused on working with partners to raise the awareness about obesity and overweight, and provide medicines (now and in the future) that can give patients more options for success,” Inchausti told OpenSecrets Blog in an email.

Novo Nordisk has given $427,000 to candidates and political parties this cycle, almost all of it through its PAC; Republicans have received 63 percent of the $286,379 in PAC money that has gone to candidates. More evenhanded gifts were given to the party committees: $30,000 each to the Democratic Congressional Campaign Committee and its Republican equivalent, both of which raise funds for House candidates, and $25,000 each to the corresponding senatorial committees.

So what did the policymakers, medical industry representatives and celebrities dine on while listening to a panel on obesity? Salad, grilled chicken and asparagus and sorbet.

Sit-down meals can be a third rail for any federal officials paying attention to ethics rules, but an expert we consulted said this one probably passed muster. “A three course meal sounds extravagant but well within the bounds of ethics rules,” said Ken Gross, a partner at Skadden, Arps, Slate, Meagher & Flom in Washington.

The meal seemed to pass a several-pronged test set out in the rules: It was widely attended (25 people or more), included a diverse group (more than one company represented) and the educational panel could fall “in connection with their duties as officeholders,” Gross said.

Women rule, even with glass roof

Later that afternoon, about a mile away, a bit more star power was on display — Shonda Rhimes, head of such hit shows as Grey’s Anatomy and Scandal, was among the speakers at an event sponsored by EMILY’s List. Rhimes added a bit of Hollywood flair to a lineup of Democratic heavyweights, including Rep. Nancy Pelosi(Calif.) and Sens. Chuck Schumer (N.Y.) and Elizabeth Warren (Mass.), all speaking about supporting women in politics.

But they weren’t the only lawmakers on the scene: Sens. Claire McCaskill (Mo.),Amy Klobuchar (Minn.) and Debbie Stabenow (Mich.), as well as Senate candidatesTammy Duckworth (Ill.), Katie McGinty (Pa.) and Maggie Hassan (N.H.) helped fill the room, too.

EMILY’s List, a PAC that distributes millions of dollars to pro-choice female Democrats in each election cycle, rented out the Kimmel Center for the Performing Arts for the afternoon’s event. Under a literal glass ceiling, attendees packed the area in front of the stage and mingled throughout the space.

Between speakers, some guests snapped pictures in a photo booth with prop signs reading “Women Can Stop Trump” and “She’s with Us,” while others applied shimmery metallic flash tattoos “Pantsuit Up” and “Shirley 1972, Geraldine 1984, Hillary 2016.”  And the PAC’s merchandise tables featured also had tables selling merchandise, including an EMILY’s List tote bag for $35 or a 30 t-shirts that read “Run Like a Girl.”

On the way out, attendees picked up free water bottles printed with “A Woman’s Place Is in the White House” and the EMILY’s List logo.

EMILY’s List has become a giant in the Democratic fundraising apparatus. The PAC has given more than $2.7 million directly to candidates so far this election cycle, nearly all of them female Democrats, including more than $400,000 to Hillary Clinton. But EMILY’s List makes its biggest impact not with direct contributions, but with outside spending done through its affiliated super PAC, called Women Vote! It has made more than $9.5 million in independent expenditures this cycle — nearly $5.4 million supporting Democratic candidates, and the remainder devoted to countering the messages of their opponents. Almost $2.6 million of the money of has been used against Republicans, while the other $1.5 million has been used in primaries against Democrats opposing candidates favored by EMILY’s List.

An EMILY’s List representative confirmed that Wednesday’s event had no corporate sponsors and was hosted solely by the PAC itself.

From what we could see, no rocks or stale chunks of bread were thrown at the glass ceiling. Maybe that’s for Thursday night.