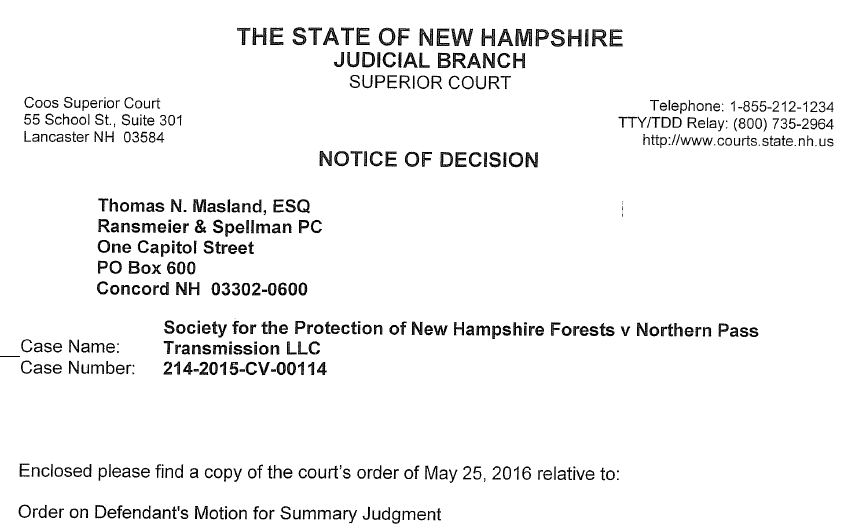 A Coos County Superior Court judge has dismissed claims by the Society for the Protection of New Hampshire Forests that use of public right-of-way next to land it owns is subject to the Society’s approval. 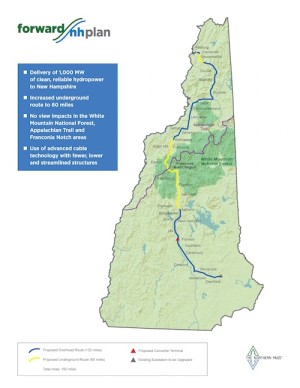 The Society had argued that Northern Pass needed its approval  “to use the public right-of-way next to property it owns, and that burial of a transmission line did not represent proper use of the roadways,” according to a news release issued Tuesday by Northern Pass.

Judge Lawrence A. MacLeod, Jr. granted Northern Pass’s motion to effectively end the lawsuit in its favor stating: “(Northern Pass’s) proposed use is within the scope of the highway easement.”

MacLeod added, “the Department of Transportation has exclusive jurisdiction over whether  to grant NPT the necessary permits  and licenses for the Northern Pass Project.”

That means the Department of Transportation, not the court, must decide, in the first instance,  whether  a  proposed  project  meets  the  “public good” requirement  of RSA 231:161.2, MacLeod wrote.

Bill Quinlan, president of Eversource Operations in New Hampshire, said in the news release: “We are pleased the Court recognized long-standing New Hampshire law that allows for the use of public roadways for projects like Northern Pass.

“We look forward to continuing the permitting process and moving one step closer to delivering the clean energy and economic benefits to New Hampshire and the region.”

The news release also said, “The Forest Society has frequently demanded Northern Pass be buried, yet in this case, had filed this lawsuit to prevent burial.”

Forest Society spokesman Jack Savage said all options are being explored, including appealing MacLeod’s decision to the state Supreme Court.

“We’re disappointed, but not necessarily surprised by the decision coming out of superior court. We are looking at our next step,” Savage said.

Northern Pass proposes building a 192-mile, 1,090 megawatt hydroelectric transmission line from Canada to Pittsburg to Deerfield, then on to the New England grid.

The state Site Evaluation Subcommittee that will eventually decide whether Eversource can build Northern Pass voted recently to extend the deadline to make its decision from Dec. 17 to Sept. 30, 2017.

Savage said: “You can swing and miss in the third inning and still end up hitting a game-winning homer in the ninth.

“They could bury this whole thing and move this along at a much faster pace. The only reason they don’t want to is Hyrdro-Quebec doesn’t want to pay for it,” Savage said.