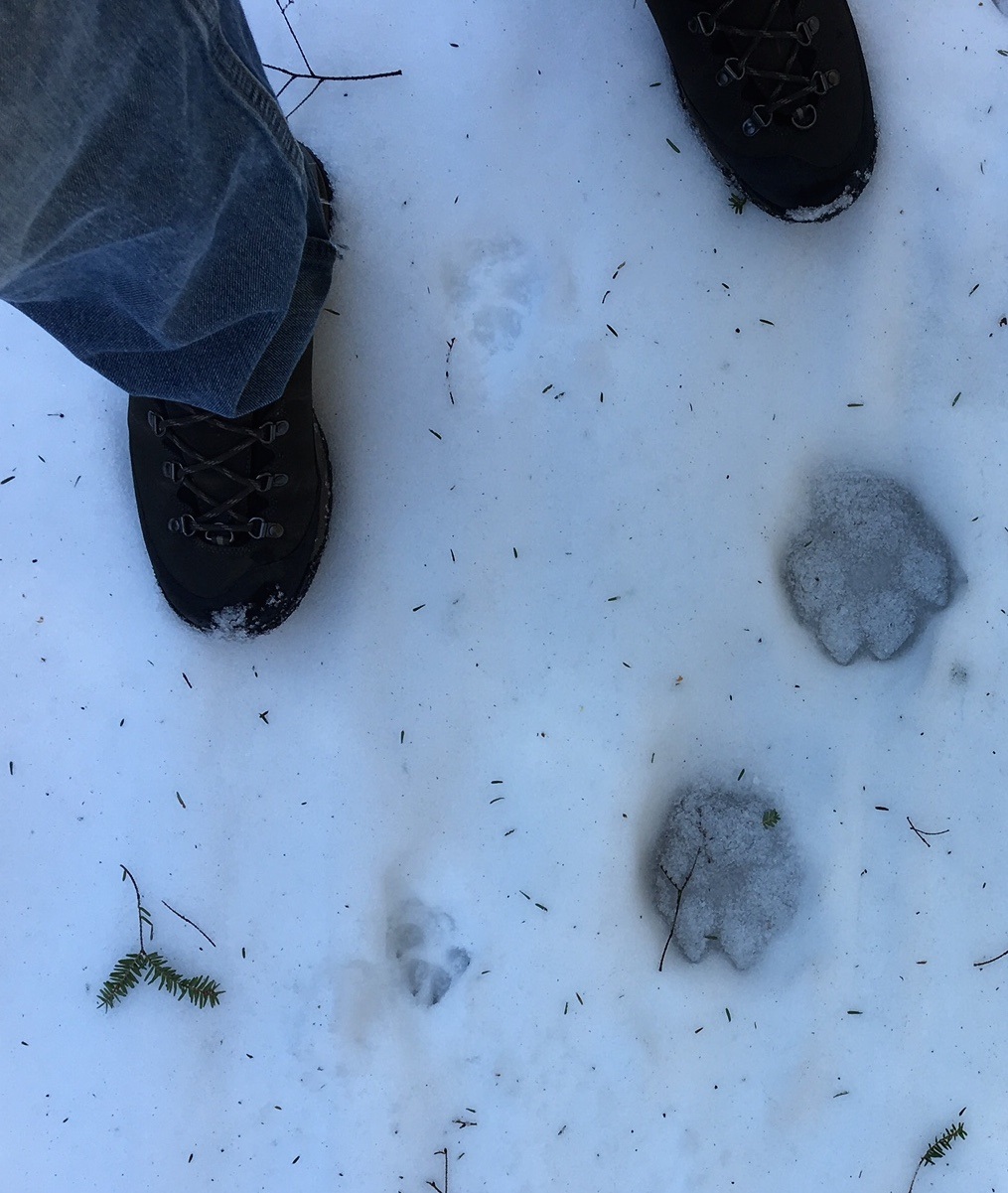 Reader Steve Walker came across these tracks while ranging the woods somewhere north of his home in Peterborough. The pug-marks are consistent with those of a cougar. Steve’s boots give some indication of size. 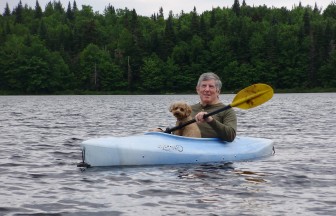 For quite a time there I did a lot of speaking around the state, at events big and small—annual meetings and business conventions and the like—but mostly for small gatherings at historical societies and libraries, which I liked best.

Because I’ve lived such an unusual and widely varied life, from peeling pulp to selling newspapers on the street to pushing lumber around to publishing newspapers on a big printing press of my own, my talks can run all over the place to the extent that there is something in there for everyone. Add in a lifelong interest in local and regional history, from glaciers to first European contact to what life was like during settlement times, and the “something for everyone” is doubled.

Thus the stage is set for a good question and answer session at the end, to me the kind of personal give and take that people relish in this increasingly impersonal world, and for me the most fun part of the program.

During these sessions people ask polite questions about newspapering (when I think they actually hate the media, the way most people pretend to do, except when their kids’ pictures are in the paper with their Little League uniforms, or the paper runs Mom and Dad’s 50th anniversary photo), but what people really want to talk about are (a) mysteries in the woods, (b) the return of the wolf, as opposed to coyotes and “coydogs,” and (c) ditto for the mountain lion, cougar, catamount, take your pick.

Hikers, hunters and just plain ramblers in the woods are always finding strange and interesting stuff, or noticing things that might have gone unnoticed before, which is why, by the way, so many bodies of missing people are found each fall, and so many unsolved crime investigations are closed. My own list includes The Stone Wall to Nowhere, and a huge bear trap found (and left) buried below a beaver pond.

Coyotes first became noticed by Officialdom in the 1940s, and in short order the misnomer “coydogs” arose and will never go away, and now our Eastern coyote, already larger than its western counterpart, is evolving into a brush wolf, ever more wolf than coyote, before our very eyes. Meanwhile reports of actual wolves persist, as if known wolf populations to the north are generating disperser males scouting for new territory, perhaps seeking to reoccupy their ancestral range south of the border.

Cougars remain as the top topic in the outdoor community’s interest, and as un-elected, imposed by fiat keeper of cougar reports for four decades and counting I’m sure to get more questions and offerings of personal experiences on that topic than any other.

Indeed, hardly a week goes by but what I get another report—and these come from all over the state, not just the far North Country—of mountain lions seen by hikers, farmers, loggers, hunters, and backyard bird watchers. Scoff at these at will, but it’s worth noting that there is nothing else out there that’s the size of a German shepherd (or better) and has an extremely long, rope-like tail.

Just recently, I received photos of what most certainly look like mountain lion photos from a woman living just across the Connecticut River from where I live. And a couple of weeks before that, a reader sent me excellent photos of four- and a half-inch tracks with a two-foot stride that to this trained eye could have been made by nothing other than a cougar.

After a couple of years’ sojourn I’ve decided to rejuvenate my speaking schedule, and having updated my thumb-drive photos am ready for the road. The only caveat is that everywhere I go, so does my dog. She is usually more of a hit than I am.

But wait, as they say on TV, there’s more. There’s no script in my talks, no prepared text. All I come with are a few lines jotted down to prompt memory, and then I just wing it. What I do expect is the most fun part—good questions from a good crowd, with a special love for the outdoors, and the great stories surrounding it all.

Longtime statewide outdoor writer and North Country newspaper owner John Harrigan of Colebrook writes for InDepthNH.org whenever the spirit moves him. His weekly column “North Country Notebook” runs in the Salmon Press papers covering the northern two-thirds of the state (newhampshirelakesandmountains.com), as well as the Colebrook News and Sentinel.  He is a guest every Thursday morning at 7:10 on Concord’s WTPL FM 107.7 with host Peter St. James. He has been working in various media, with a lot of radio and television but mostly newspapers, for 47 years and, he says, “still counting.” Email Harrigan at  campguyhooligan@gmail.com or write to him at Box 39, Colebrook, NH 03576.