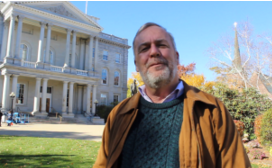 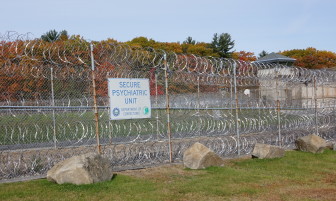 Fencing at the Secure Psychiatric Unit on the grounds of the New Hampshire State Prison for Men in Concord.

The House is expected to vote Wednesday on a bill that would allow prison officials to take DNA samples from people even if they have been found not guilty by reason of insanity or are civilly committed to the Department of Corrections without having committed a crime.

Senate Bill 339, which has already passed the Senate and was recommended to pass by the House Criminal Justice Committee 10 to 3, infuriates Rep. Renny Cushing, D-Hampton. Cushing has been fighting for years to require separate secure housing for mentally ill criminals and mentally ill patients who have not committed crimes.

“I don’t know why they want to do this to people who have never been charged with or accused of a crime,” Cushing said. “That’s part of what’s outrageous about this.”
New Hampshire Hospital, the state’s psychiatric hospital, transfers civilly committed patients who haven’t committed a crime to the Secure Psychiatric Unit at the State Prison for Men if they are deemed a danger to themselves or others.

They are housed there with mentally ill inmates who have been convicted of serious crimes, including homicide and sexual assault.

“It feeds into the presumption that people with mental illness are somehow criminal and let’s the state get away with pretending that it’s OK to house people in prison instead of treating them in the hospital,” he said.

Cushing said this certainly wouldn’t happen to someone who was sent to the hospital for cancer or a heart attack. “Rather than provide treatment for people with severe mental illness, this will stigmatize and criminalize them.”

Cushing’s work fighting to separate non-criminal mentally ill people from people who have been sentenced to prison and are also suffering from mental illness recently caught the attention of VICE Media, which is filming a documentary about it Tuesday at the Secure Psychiatric Unit.  VICE bills itself as “the world’s leading youth media company specializing in creating, distributing, and monetizing original content globally.”

Writing for the majority of the House Criminal Justice and Public Safety Committee that recommended it ought to pass, Rep. Len DiSesa said the current law requires that prison officials take a DNA cheek swab from inmates found guilty of crimes and analyze it during intake or before release from state prison.

“This bill adds the language ‘. . . or any person declared not guilty by reason of insanity or civilly committed to the Department of Corrections,’” DiSesa wrote.

DiSesa said it closes a loophole. “Currently, there are less than 20 persons incarcerated who would fall into this category, as well as a much smaller number of persons who have been civilly committed to the state prison because they are a danger to either themselves or others,” DiSesa said.

The committee debated the balance between public safety and individual rights to privacy, he said.

“But the majority of the committee felt this to be a minimal intrusion to an individual with the greater good to society to be of stronger benefit,” DiSesa wrote.

He pointed out that with the perfecting of DNA analysis, “many cold cases have been solved and many wrongly convicted persons have been exonerated.”

Sen. Lou D’Allesandro, D-Manchester, said William Wrenn, the commissioner of the Department of Corrections asked him to file the bill.

“I understand their concern,” D’Allesandro said. “But the commissioner thought this was a tool that was needed.”

Cushing plans to offer a floor amendment to strip from the bill those people who haven’t been charged with or committed a crime, or try to kill the bill altogether. If it does pass, Cushing said he hopes Gov. Maggie Hassan will veto it.

Hassan’s spokesman, William Hinkle, said: “Public safety is Governor Hassan’s first and foremost responsibility as Governor and she believes that we must continue encouraging the use of modern technology to strengthen the safety of our communities. She will review the bill closely as it makes its way through the legislative process.”