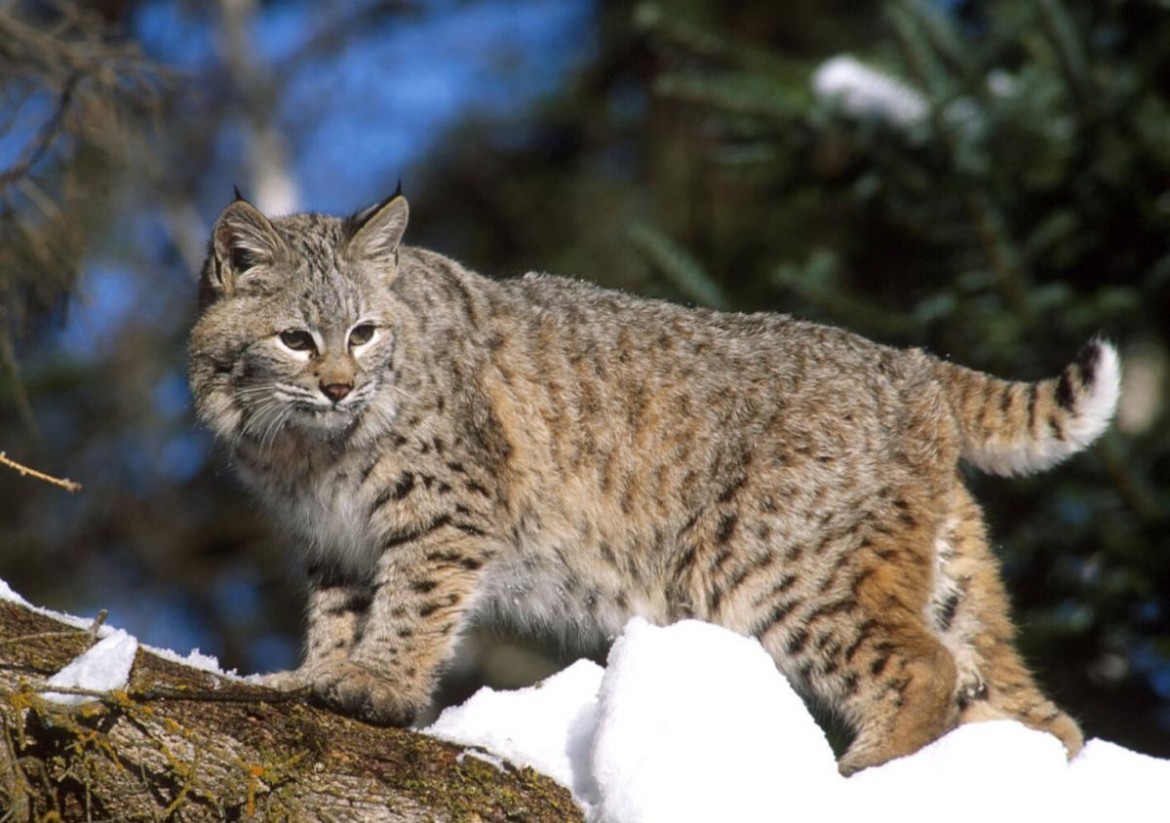 A bobcat out on a limb, as it is with the proposal to hunt, trap and hound it, which is now wending its way through the Legislature.

North Country Notebook, reprinted from the Salmon Press
Editor’s note: Three weeks after the following was written, the Joint House Rules Committee, known as JLCAR, heard testimony in a packed Legislative Hall for nearly two hours before deciding to send the bill back to Fish and Game, on grounds of questionable financial sense and due process considering overwhelming testimony and correspondence from New Hampshire citizens opposing the proposed season. Fish and Game can now address the issues and resubmit the proposal, or withdraw it.)

The bobcat controversy has brought me more mail than any other topic, including Northern Pass, and that’s saying something. At issue is a proposal — not by the professionals on Fish and Game’s staff, but instead by the politically appointed 11-member Commission — to remove the bobcat from protection and allow 50 lottery-permits to hunt it, trap it or pursue it with hounds.

To get something right up front, this is not a hunting vs. anti-hunting issue. The bobcat has innumerable defenders all over the state, from countryside to small town to city, and many of them are hunters or from hunting families. Too many people — headline writers included — assume that hunters will automatically be in favor of anything that involves killing something. This was not true with the mourning dove season when hunters helped kill it three decades ago, and it is certainly not true now with the bobcat.

“I am writing concerning the bobcat issue. Why, why, why hunt bobcats? Do they taste good on the grill? How can we stop this useless slaughter?

“How can we save the Bobcats?  Let’s start a movement and picket the Fish and Game offices.”

“Thank you for your support of leaving the bobcats be. The article as it appeared in the “Newfound Landing” Feb. 11th was interesting, informative and supportive of no bobcat management.

“How often we feel compelled to manage and improve the natural environment with unfavorable results. Understanding the complexity and ramifications of what the ‘professionals’ think is sound science are well-documented blunders. The idea of bobcat management is another bad idea. For what?”

“Overwhelming public comment indicates that making rules for a bobcat season would be contrary to public interest. The F & G Commission voted with one member missing. They went against thousands of people who had signed petitions, wrote letters, called government offices, and gave personal speeches to the Commission. The public was asked to comment and did so in good faith that their voices would be heard.

“The opponents of bobcat trapping and shooting are from every political and non-political realm. We represent a cross-section of society which is too broad to ignore. We are hunters and non-hunters, residents and out-of-staters, landowners and people who have no land, educated and non-educated. We are thousands of people who do not understand the vote taken by the F & G Commission.

“We all share one hope: That this vote will be considered against public interest and will be killed in legislation.”

I appreciate letters and try to reply to each and every one, but remind readers that their letters would be far more effective before a wider audience. To that end, why not use readers’ letters to me as the nuggets for letters to local editors, calling on their local Fish and Game Commission members as well as their local Representatives to the General Court to take action against this bobcat madness?

This is easily done: (a) rewrite your letter to me slightly, taking out the “Dear John” and other personal stuff; (b) keep it short—250 words is often the limit; (c) send it to the editor of your local paper; and (d) send it to you local Commission member as well (an address list is easily found at Fish and Game’s web site).

A letter in the newspaper can put great public pressure on those representing you in Concord, especially if you note, quite accurately, that public sentiment is overwhelmingly in favor of letting this neat little animal alone.

Longtime statewide outdoor writer and North Country newspaper owner John Harrigan of Colebrook writes for InDepthNH.org whenever the spirit moves him. His weekly column “North Country Notebook” runs in the Salmon Press papers covering the northern two-thirds of the state (newhampshirelakesandmountains.com), as well as the Colebrook News and Sentinel.  He is a guest every Thursday morning at 7:10 on Concord’s WTPL FM 107.7 with host Peter St. James. He has been working in various media, with a lot of radio and television but mostly newspapers, for 47 years and, he says, “still counting.” Email Harrigan at  campguyhooligan@gmail.com or write to him at Box 39, Colebrook, NH 03576.)