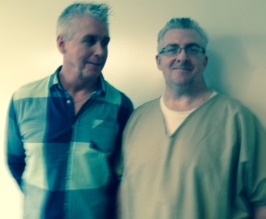 Tom O'Brien of Hollis, left, is pictured with his longtime friend, Eric Largy, just before a status hearing at the New Hampshire Hospital courtroom in Concord. 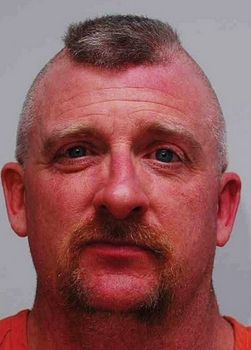 Eric Largy is pictured at the time of his arrest in 2009.

CONCORD – Eric Largy appeared calm as he was escorted in handcuffs and leg chains to New Hampshire Hospital’s small courtroom Thursday to see if his five-year involuntary commitment would be renewed for another six months.

Largy believes there has been a great deal of conflicts in his case because of his father’s law enforcement connections.

He has refused psychiatric treatment at the Secure Psychiatric Unit at the state prison for men in Concord where he has been a patient for five years.

At the status hearing Thursday, however, SPU officials said he will be “stepped down” to the New Hampshire Hospital, the state’s psychiatric hospital, as soon as a bed becomes available.

“I would like to be moved here or absolutely discharged,” Largy said before the hearing.

Largy’s parents, Clifton and Nancy Largy, did not attend Thursday and won’t attend the final hearing. They will be in Florida, Clifton Largy said when reached by phone Thursday night.

“It’s a sad case. I’d like to see that he gets help,” Clifton Largy said. “He doesn’t communicate at all. He’s not accepting treatment. He won’t talk to his mother.”

In the hospital hallway, Eric Largy spoke with his longtime friend and advocate, Tom O’Brien, his lawyer, Shane Stewart and this reporter.

Although the public and reporters are usually barred from such proceedings, the law allows the patient to waive his confidentiality, which Largy did.

Largy blames the prison-like environment at SPU for a serious health emergency. He suffered an aortic dissection, a tear in the major artery carrying blood from the heart, on Thanksgiving and had to be airlifted to Dartmouth-Hitchcock Medical Center for surgery.

The SPU diet is unhealthy, consisting of processed food and white bread, he said, and there is little opportunity on the prison grounds for exercise.

Largy was charged with kidnapping and assault, but the charges were dismissed when he was found incompetent. The statute of limitation runs out April 2, 2018, and the state could potentially re-indict Largy until then, Stewart said.

While Largy doesn’t directly discuss the assault allegations, even with friends, he does refer to domestic violence.

Largy will have to reconsider his work options if he is released soon because of his health. He used to own Bobcat equipment and did heavy lifting jobs, he said.

“I would have to readjust,” Largy said.

Stewart said Largy has a right to refuse medical treatment, which at SPU would consist of taking psychotropic medicines that have serious side effects.

“I’m arguing against renewal – that he be absolutely discharged at the final hearing,” Stewart said after the court conference. “They (the state) will argue he needs to be renewed.”

Instead, he will be assessed by a new clinical team at the New Hampshire Hospital.

According to news accounts at the time, Largy and his father had an argument that turned into a fistfight in which Largy broke his father’s jaw and eye sockets and restrained him all day in a barber-style chair.

The New Hampshire Business Review reported that Largy told police his father started it, had tormented him all of his life and “the (expletive) bastard got what he deserved.”

Stewart said Largy hasn’t been violent at SPU. “Not once and he hasn’t shown signs of mental illness,” Stewart said. “He’s a model patient.”

Thursday’s hearing was changed to a status conference on a motion filed by Stewart because a psychiatrist he plans to call as a witness wasn’t available.

Five years ago, Largy was proven by clear and convincing evidence to be a danger to himself or others as a result of mental illness. Stewart said the state now will only need to prove he suffers from mental illness to renew his commitment for six months.

Judge Margaret-Ann Moran approved Stewart’s motion to hold the final commitment hearing March 31 at the courthouse at 163 North Main St., Concord, because it holds more people than the small courtroom on the second floor of the hospital.

Judge Moran also agreed not to hear the case because of Largy’s concerns that she socialized two or three years ago with one of the psychiatrists in the case and his wife.

Stewart praised Moran as a judge, but Largy said he couldn’t allow any more conflicts.

At New Hampshire Hospital, Largy will be allowed more privileges, including walking outside on the grounds and possibly leaving the hospital campus, Stewart said.

The New Hampshire Hospital is locked, but is not as secure as SPU, which is run by the Department of Corrections and staffed by corrections officers and medical personnel.

“If the hearing is on (March) 31st and the judge issues the order that day and says ‘no’ to the renewal, then he’s out – absolutely discharged,” Stewart said.

The judge could also agree to the renewal, and even keep renewing Largy’s committal indefinitely in the future, he said.

Tom O’Brien, who works in mortgage financing, spent Thursday at the hospital supporting his friend.

“I’ve been married for 23 years. Eric was the best man at my wedding,” O’Brien said. “I’ve known him since the second grade.”

His main concern is that Largy needs to be in a hospital, not a prison. Outside of the alleged incident with his father, O’Brien said he has never known Largy to be violent.

“I’m here to be an advocate for him and be a voice for him on the outside,” O’Brien said.