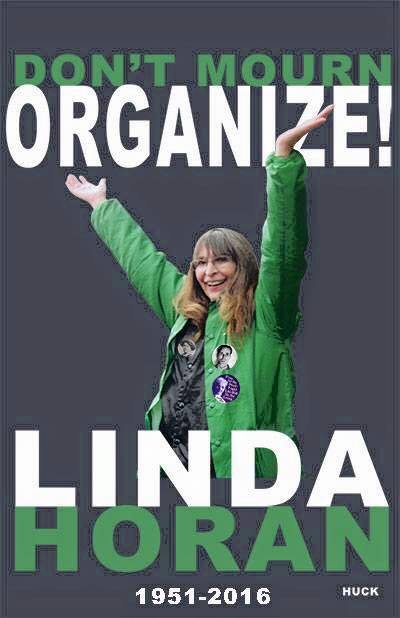 Linda Horan was a well-known labor activist in New Hampshire. This was created by artist and labor union cartoonist Gary Huck.

The state is seeking to vacate the order in the lawsuit Linda Horan won before she died that forced the state to issue her a medical marijuana ID card before dispensaries open here so she could buy it in Maine.

On Friday, Assistant Attorney General Frank Fredericks filed a second motion to the state Supreme Court – this one seeking to have Judge Richard McNamara’s Nov. 24, 2015, ruling in Horan’s favor remanded to the Superior Court for dismissal.

Today, attorney Paul Twomey, who represented Horan for free before she died of lung cancer on Feb. 1, filed his objection to the state’s motion.

“The state seeks to obtain equitable relief, yet its course of conduct in this case and the effects of the relief it seeks is not only cruelly inequitable to the patients involved, but borders on stunning bureaucratic amorality,” Twomey wrote.

“It would be hard to imagine more unclean hands.” Twomey asked the court to terminate the case without further action.

A month after Horan won in Merrimack County Superior Court, the state began issuing cannabis ID cards to other qualifying patients. Twomey estimated about 300 patients would be forced to live in fear because of the state’s latest action.

Fredericks did not immediately return phone messages today, nor did Jeffrey Meyers, the new commissioner of the Department of Health and Human Services, so it is unclear if the other qualifying patients should be worried.

“The state’s belated attempt to vacate the order would cruelly throw these patients into a nightmare of uncertainty — not certain of the legal status of their cards or the treatments that had begun,” Twomey wrote.

“Some of these people, like Linda Horan, are facing death and are currently receiving palliative care to relieve horrible symptoms,” Twomey wrote.

Twomey responded originally to the appeal saying there could be no case because Horan was deceased. Her case was only about her ID card, he said.

If the Court grants the state’s motion, it would be like Horan’s court fight never happened, he said. “It’s an attack on the other families, too. It’s like, let’s pretend it never happened, like Linda Horan never lived,” Cushing said.

Horan, a well-known labor activist, lived in Alstead until her death at age 64 on Feb. 1.

As of today, the department was continuing its work reviewing applications for medical marijuana ID cards. “We’re continuing to process applications and mail cards to those who are eligible,” said Jake Leon, DHHS’ director of communications.

Fredericks said McNamara’s order interpreted the law as requiring a patient to designate an Alternative Treatment Center before receiving an ID card, but found that the statute did not mandate that the patient obtain the cannabis from the designated dispensary.

“Thus under the trial court’s order, many of the deliberative controls on cannabis that are effectuated through the use of the DHHS-monitored ATCs may be circumvented,” Fredericks wrote.

The state argued unsuccessfully in Horan’s case that patients can only obtain the ID cards after the ATCs are operating. That is expected to be some time in the spring.