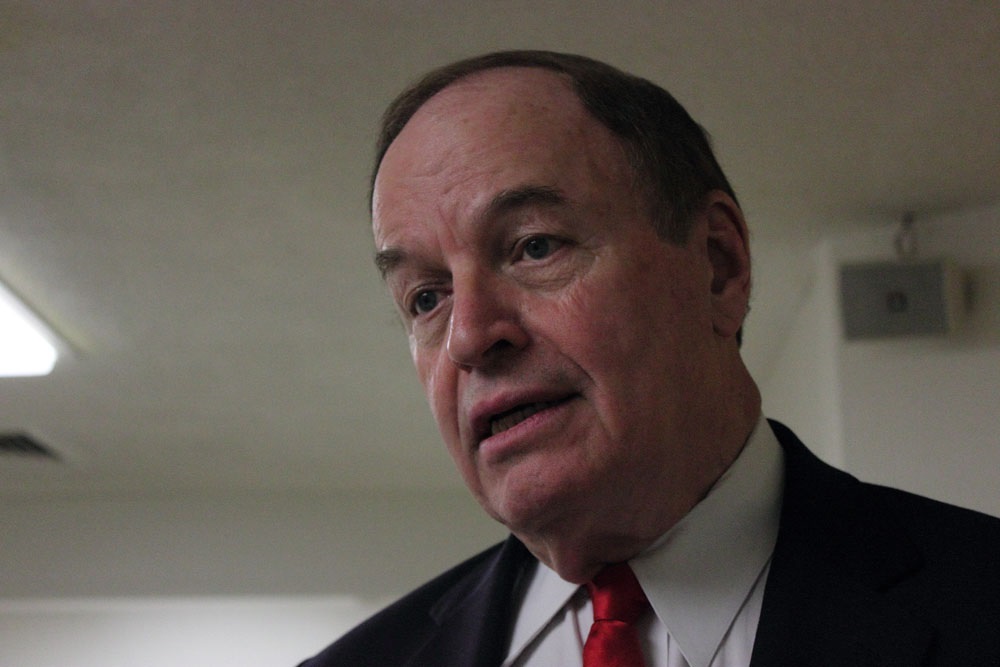 Outside spending groups, some of which don’t disclose their donors, have been trying to help Sen. Richard Shelby (R-Ala.) avoid a runoff in his Super Tuesday primary.

Super PACs and dark money groups have spent more than $1.9 million to boost the campaigns of congressional incumbents with primaries today — Super Tuesday, for folks just in from another planet. And even as voters prepare to go to the polls, the donors of some of that money remain undisclosed.

Races in the Heart of Dixie and the Longhorn State have been the biggest magnets for independent expenditures by those groups. All but $143,113 of the $1.9 million spent so far by outside groups in Super Tuesday states went to contests in Alabama or Texas, most of it supporting the incumbents.

Challengers in all Tuesday races also faced $267,652 in outside money spent attacking them; just $141,834 was spent to help them out.

In some cases, large national groups swooped into races where incumbents have challengers to their right. In others, coalitions of groups piled on.

In Alabama, Republican Sen. Richard Shelby‘s attempt to avoid a primary runoff as he tries for a sixth term accounts for a large chunk of the total spent by outside groups in congressional races — $941,819, much of which came from out-of-state. The groups have been spending to help Shelby pad the margin of his expected victory over an upstart opponent, making the race this cycle’s sixth most expensiveso far in terms of outside spending.

Shelby’s supporters effectively hid some of that money, including a $100,000 contribution directly from a coal company, as OpenSecrets Blog revealed this month. Much of the rest came from a political non-profit called Citizens for a Sound Government that appears aligned with the Barbour family. The source of that money never has to be revealed.

Below Shelby on the Alabama ballot, two GOP House members, Rep. Martha Robyand Rep. Bradley Byrne, have had the backing of the U.S. Chamber of Commerce , which has spent more than $500,000 on their behalf.  As a 501(c) nonprofit organization, the Chamber won’t ever have to publicly disclose its donors.

Nearly as little is known about the funding in the Super Tuesday race with the most spending overall. In Houston, a super PAC called American Working Familiessupports Rep. Gene Green (R-Texas). The group received one $50,000 contribution last year from wealthy Houstonian and hedge fund manager Bill Perkins, but has spent $196,750 — $50,000 in the last week  — to oppose Green’s last-minute challenger, Adrian Garcia.

Because of the Federal Election Commission’s disclosure timetable, the super PAC’s funding sources, beyond Perkins, will remain unknown to voters on Tuesday.

Meanwhile, the super PAC supporting Garcia has outspent American Working Families in the last week, and its funding source is even murkier. Texans for a Better Future recently spent $57,677 to attack Green and support Garcia. Again, because of the FEC’s disclosure deadlines and the fact that Texans for a Better Future came into being on Feb. 17, it hasn’t yet filed any reports disclosing its donors.

OpenSecrets Blog couldn’t reach either of two treasurers affiliated with the super PAC. The group’s statement of organization on file at the FEC gives no phone number for a contact.

Whether dark or disclosed, statistically, Garcia and other challengers could use the money — beating an incumbent isn’t easy. For years, the “cost” of defeating an incumbent has grown, a CRP analysis shows. Incumbents often have a massive fundraising advantage — like Alabama’s Shelby, who has $12.2 million in his campaign’s war chest. In 2012, incumbents raised more than $679 million for their campaigns while challengers brought in about $228 million.

And as the money laid out by groups in Alabama and elsewhere indicates, sitting lawmakers have the edge with outside spending groups as well. Another example: In Rep. Kevin Brady‘s (R-Texas) race, the Congressional Leadership Fund spent $175,924 in the last week to support the long-serving lawmaker — $1,699 in the last 24 hours.

Even incumbent Rep. Dave Brat (R-Va.), who famously felled former incumbent House Majority Leader Eric Cantor in his 2014 primary, gets the incumbent bump. Brat got an assist in his race from FreedomWorks for America to the tune of $60,280.