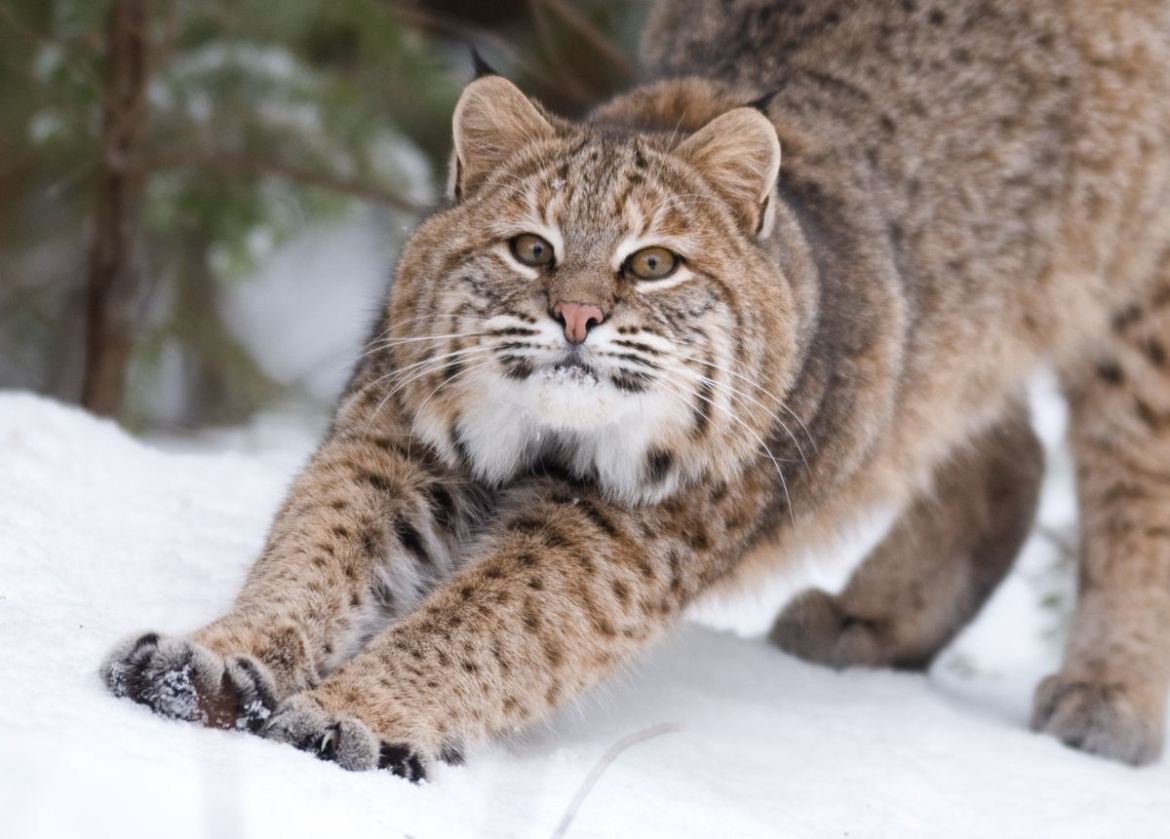 A New Hampshire bobcat stretching in the snow.

As a guy who’s been newspapering for nearly half a century and done a lot of radio and television along the way, it’s totally in character that my working day begins and ends with the news.

It begins during early morning kitchen patrol with New Hampshire Public Radio. I know every voice, even while I’m shaving a whole room way.

I know who’s likely to say “New Hampshire Public Radio,” which makes me proud of my state for having it, or the ugly version (to me), “NHPR,” which actually takes the same time to say as the real thing. Ditto (almost) for “NatGeo” (ugh).

I wish my favorite Public Radio station would quit doing the weather from the summit of Mount Washington (and thanks to the Obs Croo for putting up with this for all these years), and do something far less scientific and more palatable to the public, like Vermont’s justly famed “Eye on the Sky.”

I’ve long been into good-natured Twin-State bashing, so I don’t like getting beat by the yurt-dwelling, Saab-driving, rimless-glasses, Birkenstock, gorp-eating Ben & Jerry’s crowd in Vermont, especially in the category of state rest areas (Anyone seen their newest? Wow.), which still seem so much better than even the touted new “much improved” dreary best we can offer.

One of the best parts of the day is (or was) spreading the New York Times out on my kitchen counter and skimming it for items of interest. And to pre-empt howls of protest about Times editorial policies, that’s not how I rate a newspaper. I’m after the news, and on national and international news the Times is tops.

By the time I bought my Times at LaPerle’s IGA, at around 4 p.m. if I was lucky – only six copies reached Colebrook – the news was already almost 10 hours old, and by the time I spread it out the next-morning it was 30 or so, older than wrapped fish. This sometimes left news junkies of the instant variety speechless.

My reply was and is that most news does not affect me directly, at least not right away, and I couldn’t change it if it did, because in that way it’s already dead, yesterday’s news. And in that way the news is like a river, moving all the time, and I dip a dipper and absorb it, but if I want to change it I have to sprint far upstream.

(Why have I been using the past tense in this scenario? Because as of mid-January, the Times ceased newsstand sales north of Lancaster. Read it online instead? No way – I want the real thing or nothing, and besides, I look at a computer screen too much already. Get it by mail? A real budget-buster.)

In the afternoon I turn to print of the on-time variety – local weeklies, the Union Leader, and the St. Johnsbury, Vermont Caledonian-Record, one of the feistiest little dailies I know. Again, some people arch an eyebrow at the Union Leader, and my reply is that it’s the news I’m after, not the editorials, although any good paper should have them.

For in-state television, I watch Manchester’s Channel 9 at 6, partly because of its statewide news coverage and partly because it’s the lead-in to the ABC Evening News. To those who gripe about less than stellar news coverage north of Concord I say hey, look at the geography and the expense – although with the gazillions the station gobbled up in Primary ads, you’d think they’d spare no expense.

I’m thinking of dumping ABC, however, because it’s become mostly 15-second-attention-span snippets of non-news (as in “Why did they do a teaser on this snippet if they weren’t even going to tell the story?”).

Then there’s the maddening tactic of not saying, in pre-ad-break teasers, just where the next story about a train wreck or e coli outbreak occurred. Ergo, you find out where something happened only after the commercials. Gee, wonder why. Could it be that they want to hook viewers and keep them on the line, as in “money?”

Despite a statewide public outcry, the politically appointed 11-member Commission that oversees the Fish and Game Department voted to allow a proposed 50-permit hunting and trapping season on bobcats to advance to the Legislature.

The Commissioners went ahead with the season – requested by three or four trappers – despite warnings from longtime Department friends that it would spark great anger against Fish and Game, endanger long-nurtured relationships between diverse groups that often make common cause, drive another wedge between hunters and the non-hunting public, and create new enemies and problems that an already-stressed Department simply does not need.

As a result there are new, stronger calls for a more representative Fish and Game Commission (one must have had a hunting license to serve on it) to not only be more reflective of the much broader outdoor community, but also to set the stage for a much more financially secure department down the road. As it is, Fish and Game lurches from crisis to crisis.

More outdoor people and groups in a bigger Fish and Game tent could translate to a much more robust argument for more money, given the Department’s classic mission-creep, and given the fact that more beneficiaries of the Department’s mission are not necessarily license buyers.

In sum, a more representative Department is the right thing to do, and creates a justifiable demand for a bigger slice of the budget pie. It’s that simple.