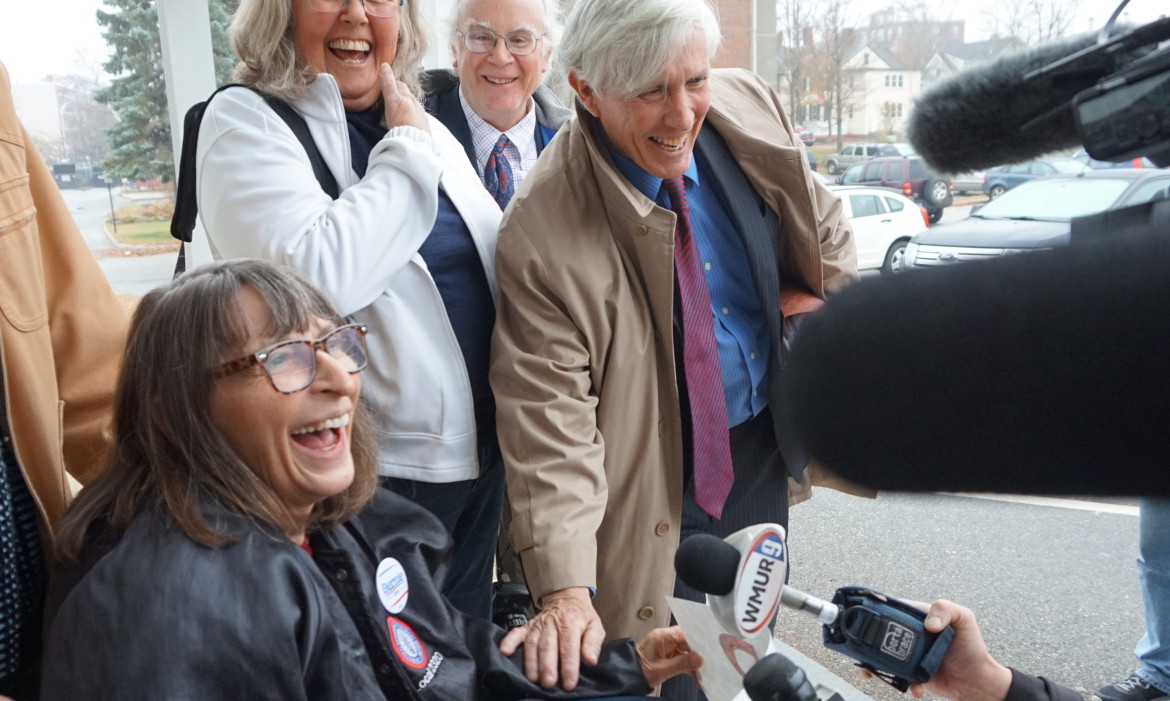 Linda Horan is pictured after a hearing in Merrimack County Superior Court in Concord flanked by friends and her attorney, Paul Twomey, at right. Horan died Feb. 1

The attorney who represented Linda Horan in her lawsuit to obtain a medical marijuana ID card before she died has asked the state Supreme Court to dismiss the appeal the attorney general filed in the case.

Paul Twomey, who represented Horan for free, on Tuesday asked the high court to dismiss the state’s appeal “because Horan died leaving no representative to take any steps in the case.”

“They have nobody on the other side of the case,” Twomey said. “You can’t have a case without two parties in New Hampshire.”

The appeal also raised questions that weren’t litigated in Superior Court as to whether Horan could possess marijuana in New Hampshire or purchase it in Maine, Twomey said.

The attorney general can’t legally seek an advisory opinion from the Supreme Court, he said.

Read the full letter to the Supreme Court

Horan, who was dying from lung cancer at the time, was then able to buy it in Maine because New Hampshire dispensaries won’t open until spring. Horan, a well-known union activist, died on Feb. 1.

The attorney general filed the appeal in Horan’s case on Dec. 22, 2015, but it wasn’t reported in the news until Sunday.

Twomey said Horan’s lawsuit was limited to whether the state was required to issue Horan a patient ID card, but the attorney general’s appeal doesn’t address that issue.

“I’m stunned they think this court can tell Maine what it can and can’t do,” Twomey said. “It’s puzzling beyond words and it’s hard to understand their decision-making process.”

The question the attorney general asked the Supreme Court to decide in Horan’s appeal is whether the law, RSA 126-X, “authorizes a New Hampshire patient to obtain or possess cannabis from a source other than the alternative treatment center the patient designated when applying for a registry identification card with DHHS.”

The state’s position continues to be that the statute links a patient to the treatment center designated on his or her application, Fredericks said.

“We have appealed seeking the Supreme Court’s interpretation,” Fredericks said.

Fredericks acknowledged that the state issued patient ID cards to Horan and other qualifying patients before appealing to the Supreme Court.

He said Attorney General Joseph Foster didn’t advise the Department of Health and Human Services to issue the cards after McNamara’s ruling.

“They (DHHS) asked whether they could issue them. The attorney general said they could. We didn’t tell them to do it,” Fredericks said.

Foster previously denied InDepthNH.org’s right-to-know-request seeking communications between his office and DHHS regarding the issuance of the ID cards. They involved lawyer/client privilege and were therefore exempt from the right-to-know law, according to the attorney general’s office.

InDepthNH.org plans to appeal that decision. The New Hampshire court website that lists filings in closely watched cases lists Horan’s case, but did not update it to include the notice of appeal.

Fredericks said the state wants to hear the Supreme Court’s opinion on the medical marijuana law.

“We want clarification on the important points of law where New Hampshire residents can obtain cannabis,” Fredericks said.

Read the full notice of appeal