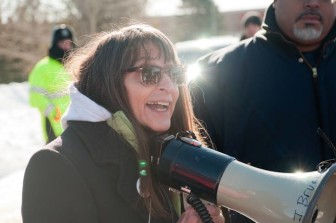 Linda Horan, who died Feb. 1, was a well-loved union activist. When she became ill, she fought the state to be able to obtain legal medical marijuana and helped many other patients by doing so.

UPDATE: The attorney general appealed a judge’s decision ordering the state to issue a medical marijuana ID card to Linda Horan – who has since died – after issuing them to Horan and other qualifying patients.

The appeal was filed with the state Supreme Court on Dec. 22, 2015, but it wasn’t previously made public.

Horan’s attorney Paul Twomey had been served the notice of appeal, but didn’t mention it publicly and told Horan he expected the appeal would be dismissed.

“I didn’t want her to be worried having it in the press and by that time she was in hospice care,” Twomey said Sunday.

Read the full notice of appeal

The state argued unsuccessfully last November that Horan had to wait until the marijuana dispensary in New Hampshire designated on her application becomes operational sometime in the spring before she could obtain it. At the time she was dying from terminal lung cancer.

“We want clarification on the important points of law where New Hampshire residents can obtain cannabis,” Fredericks said.

Twomey, who represented Horan for free, said he plans to file a motion to dismiss the notice of appeal early in the week.

“This is absurd,” Twomey said. “There is no one to have a case with” now that Horan has died.

Horan, who lived in Alstead, was 64 when she died on Feb. 1. She had many supporters when she sued the state to obtain a medical marijuana ID card so she could buy cannabis in Maine before New Hampshire dispensaries open. She was finally able to do so just six weeks before she died.

Rep. Renny Cushing, D-Hampton, said he attended services for Horan on Friday and discussed the attorney general’s appeal with Twomey.

“Here we are celebrating Linda’s life and the scores of people who have access to medical marijuana because Linda broke down the opposition from the state and had the state issue the cards. And the attorney general is still appealing the decision of a dead person,” Cushing said.

Twomey said the state is wrongly trying to appeal matters that were not decided in the Merrimack County Superior Court case.

But Fredericks said he expects the case to move forward. The state Supreme Court must accept the appeal, he said, conceding that the marijuana dispensaries may be operating in New Hampshire by the time the court hears the case.

When asked why the attorney general would advise the Department of Health and Human Services to issue ID cards to Horan and other qualifying patients if an appeal was planned, Fredericks said Attorney General Joseph Foster didn’t advise DHHS to do so.

“They (DHHS) asked whether they could issue them. The attorney general said they could. We didn’t tell them to do it,” Fredericks said.

Foster denied a right-to-know-request filed by InDepthNH.org seeking written and email communications between his office and DHHS regarding the issuance of the cards stating they involved lawyer/client privilege.

The New Hampshire court website that lists filings in cases that are closely watched in the media lists Horan’s case, but did not update it to include the attorney general’s notice of appeal.

The state Department of Health and Human Services  issued Horan’s medical marijuana ID card after Judge Richard McNamara ruled in her favor on Nov. 24, 2015, and issued cards to all qualifying patients who had applied a month later.

The question the Attorney General’s Office asked the Supreme Court to decide is whether the law, RSA 126-X, “authorizes a New Hampshire patient to obtain or possess cannabis from a source other than the alternative treatment center the patient designated when applying for a registry identification card with DHHS.”

The state’s position continues to be that the statute links a patient to the treatment center so DHHS has oversight, Fredericks said.

“We have appealed seeking the Supreme Court’s interpretation,” Fredericks said.

Twomey said the state didn’t appeal the issuance of a card to Linda Horan. “That’s the only thing the court ruled on,” Twomey said.

The attorney general can’t ask the Supreme Court for an advisory opinion, Twomey said. Only the Legislature can do that, he said.

“This court doesn’t have any jurisdiction over Maine. It’s none of their business what Maine does,” Twomey said.

Updated to include date the appeal was filed and to add a link to the full notice of appeal.