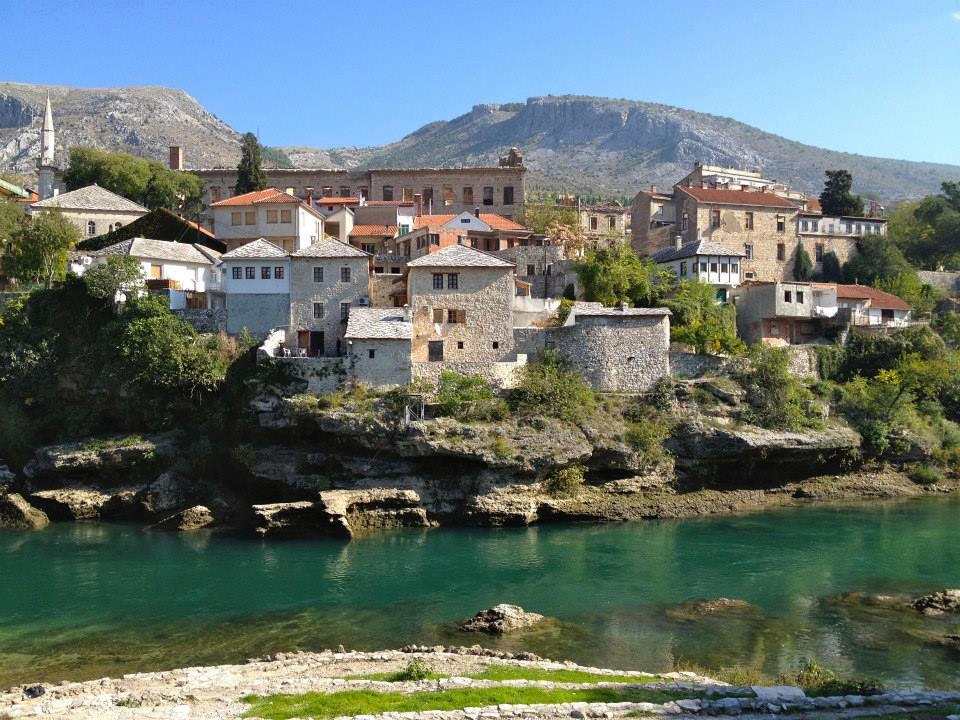 The river bank of the Neretva River in Mostar. 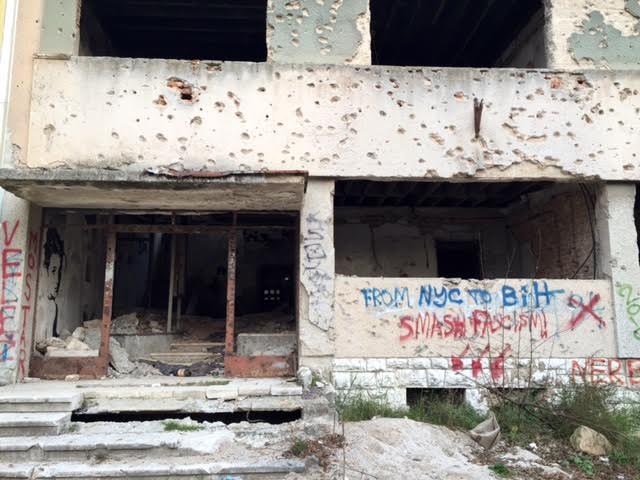 “From NYC to BiH, Smash Fascism!” is the graffiti on a building destroyed by bullets and mortar shells in the early 1990s during the fighting between Bosnian Croat forces and Bosniak Muslims, on the boulevard that divides the city between East and West. It was the front line and remains the dividing line between these two groups today. Sarah Freeman-Woolpert Photo 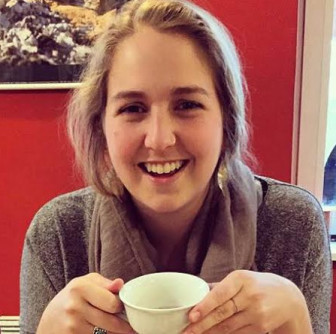 Before leaving New Hampshire last August, I drove to the Concord City Hall to figure out how to submit my absentee ballot from Bosnia so I would be able to vote from abroad.

The ballot arrived by e-mail in December, something new since the last time I voted absentee. My mom and I were traveling to India and Nepal in 2010, and had our ballots mailed to our friend’s home in Kathmandu. They never arrived.

But this time around was a breeze. I printed my ballot at the local copy shop in Sarajevo and my mom ferried it back home to Concord after she visited for Christmas.

I often dabbled in campaigns growing up, doing some door-to-door pamphleting and the like when home on college breaks, but never followed the issues closely.

I was lucky to attend both of President Obama’s inaugurations on the National Mall. George Washington University is located in the heart of D.C., so the second inauguration was merely a matter of rolling out of bed and walking 20 minutes up Constitution Avenue.

When I was a kid, my dad took us to stuff envelopes for candidates. I remember phone banking when I was about 11, the same age as when I published my first op-ed in the newspaper.  I saved the Christmas cards we received from the politicians we supported, believing I had made a real difference in their election.

Looking back now, I see how these early experiences shaped my identity as a citizen. Many of the people I speak with here tell me that Bosnia does not have a strong culture of activism, although I know several young people who are working to change this.

Some attribute the political disengagement to Bosnia’s socialist past, or a general feeling of apathy among young people who are critical of Bosnia’s corrupt government. They don’t feel their voices make a difference to those in power.

Boasting the highest rate of youth unemployment, and the highest salaries for politicians, in Europe, it is no wonder young people are upset with their leaders.

Last week I visited the youth cultural center in Mostar, which doubles as a bar and hangout spot for young people. Over a beer, one of the guys asked me if I was “feelin’ the Bern.”

The Bosnian nightly news airs brief segments on the primaries. The night of the Iowa Caucuses, I sat at the kitchen table with my host brother watching Steven Colbert clips and talking about right-wing conservatives in this election.

We talked about how important it is for Americans to know about places like Bosnia, and how politicians in the Balkans have used scare tactics to turn citizens against each other.

As if to intentionally illustrate this connection, several weeks ago a convicted Serbian war criminal, Vojislav Šešelj, came out in support of Donald Trump and encouraged Serbs living in America to vote for him.

It is easy to become discouraged about politics, to shrug our shoulders and give up, to think our leaders are so disconnected from our lives that we cannot possibly make a difference.

But I feel a great sense of unity with the folks at home this election season, no matter who they support. At least for me, I am becoming much more aware of the power of my vote.

I love debating the issues with friends here and at home, arguing about candidates over Skype with my parents, and wondering how my mom will host 10 campaign volunteers in our three-bedroom, one-bathroom house.

We may be divided by the issues or the candidates we support, but we are connected by our responsibility as citizens to make our voices heard. In a democracy, the process of participation is just as important as the outcome at the polls.

Sarah’s View from the Borderlands is Sarah Freeman-Woolpert’s new biweekly column for InDepthNH.org. Freeman-Woolpert is originally from Pembroke, New Hampshire. She graduated from The George Washington University in 2015 and is currently spending 10 months in Bosnia and Herzegovina conducting research on youth activism and civic engagement. To read more of her writing, visit her blog at stilllifesarah.blogspot.ba.