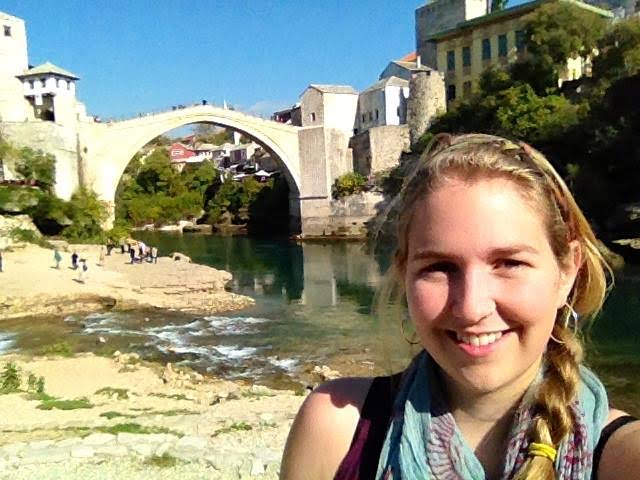 Sarah Freeman-Wooplert is pictured in front of the Stari Most bridge in Mostar, Bosnia and Herzegovina.

Fat flakes of snow drift down from Sarajevo’s overcast sky as my bus rounds the hillside headed south.

I have a one-way ticket to Mostar, the Herzegovinian city famous for its beauty and its iconic bridge, the Ottoman-era Stari Most.

I will be staying with a local family for the next month; they are originally from a nearby village and still cultivate most of their own food in the countryside.

Their home fills with the scents of fresh pomegranates and sizzling sausages, and they have provided me a home away from home since they first hosted me last winter. Mostar is not only renowned for its beautiful bridge and multicultural influences, but for what the Stari Most represents: a connection linking two sides of a divided population.

Bombed by Bosnian Croat forces in 1993, Mostar’s old bridge collapsed into the river during the Bosnian War and was rebuilt with international aid in 2004.

It is the city where I first held long conversations with young Bosnians about their divided city, and where I began grappling with the many ways this segregated society mirrors my own.

The first time I walked across the bridge was more than two years ago. My feet slipped over the smooth cobblestones as fellow tourists jostled past me. We all craned our necks to see the professional divers clad only in tight Speedos, soliciting money from onlookers to make their spectacular jump into the rushing river below.

More sober reminders of the bridge’s history look on from the memorial stones placed along the bridge’s arch, reading “Never Again.”

After its reconstruction, Stari Most is now hailed as an image of reconciliation by international observers; it even symbolized peacebuilding on the cover of my college Conflict Resolution textbook.

Yet some citizens of Mostar view the bridge as an empty symbol, signifying little without investments to rebuild Mostar’s destroyed economy and infrastructure. A friend of mine who helps organize a program bringing kids from both sides of the city together told me that many of the Croat kids from the West side of town have never even been to the Old Bridge.

To them, it is a symbol of Bosnian Muslim culture and therefore does not belong to them.

Foreign donor agencies funded the bridge’s reconstruction, but in a city still operating with segregated schools and institutions, it would take more than a bridge to truly connect the city’s population.

Building bridges means little unless you include people from both sides of the river in the process.

As the presidential primary season looms large in New Hampshire, I have been thinking about the need for building bridges more than ever.

Watching this election season unfold from a distance, I have talked often with friends in Sarajevo about the candidates. Most want to know about Donald Trump, grinning sarcastically or wide-eyed in sincerity as they ask me if I think he could really win.

Many of my friends from Sarajevo do not vote, discouraged by the roster of uninspiring candidates, most of whom belong to a nationalistic party and add to their already bloated salaries by embezzling public funds to further line their own pockets.

Voter turnout in Bosnia and Herzegovina is actually on par with the United States, almost unbelievably, given how much pessimism I have encountered toward the political process here.

When discussing the upcoming election in the United States, I get the sense that Bosnians have an acute sense of what is at stake.

After Trump declared that he would impose an immediate ban on Muslims entering the country, my friends and I sat drinking beers in the Old Town discussing the slippery slope this kind of language can lead to, something people in Bosnia know all too well.

Some have compared Donald Trump to the Bosnian Serb leader Milorad Dodik, whose controversial, nationalistic statements have threatened to jeopardize Bosnia’s fragile peace in recent months. Dodik is infamous for foregoing political correctness to whip his constituents into a frenzy to secede from the country altogether.

Islamophobic statements hit even closer to home here in Bosnia, where most of my friends were either raised culturally Muslim or are actively practicing the religion today.  I have listened to them grapple with the urge to defend their faith against harmful misconceptions, feeling the injustice of needing to justify themselves.

After closely following the November attacks in Paris with horror, my friend, who is a journalist and outspoken human rights activist, asked me in frustration: “It is terrible what happened, but why should I have to apologize?”

Living with a Muslim family in Mostar gives me an even closer window to Bosnian life. I am staying in the spare bedroom with a family of four, two parents and their two grown children, and two older married daughters who visit with the grandchildren from time to time.

The other day, many relatives came over in the afternoon to visit and drink coffee, and the house bustled with children and family members. Ranging from seven months to 10 years old, the kids ran around in delighted chaos as the adults tried to talk over the shouts and laughter.

Giggling and poking each other, the children gathered by an armchair and peeked out from behind each others’ shoulders as they started performing an impromptu puppet show.

In their excitement, the children barely noticed their elderly grandfather performing the afternoon prayer nearby, kneeling on his prayer rug and patiently ignoring the squirming bodies crowding against him, tripping over one another to put on their show.

A smile crept across my face as I watched this wizened old man prostrating himself in prayer to the music of tiny feet thumping around the perimeter of his small, personal ceremony of devotion.

I sat together with the family’s sisters and mothers as we sipped dark, thick cups of coffee, passing the baby from one set or arms to another until he started to cry at the unfamiliar commotion.

Surrounded by the many layered generations of this family, I appreciate how they share the communal space, the energy of the children, the gentleness of the grandfathers and the patience of the mothers.

These moments of tenderness always bring my thoughts home. I remember times spent curled up reading with my mom and sister, and I think about how families sustain and endure no matter their distance or differences.

Perhaps in countries like Bosnia, the hardships families faced in the past bond them closer now. Their lives impress upon me the importance of cooperating and including everyone.

It’s that time in distant New Hampshire with the presidential primary so close that the words of President Obama in his last State of the Union address come to my mind here that democracy requires “basic bonds of trust between its citizens.”

I hold out great hope we can strengthen those bonds and hold tight to our values.  No matter the candidate, as a family we will always bridge our differences.

Sarah’s View from the Borderlands is Sarah Freeman-Woolpert’s biweekly column for InDepthNH.org. Freeman-Woolpert is originally from Pembroke, New Hampshire. She graduated from The George Washington University in 2015 and is currently spending 10 months in Bosnia and Herzegovina conducting research on youth activism and civic engagement. To read more of her writing, visit her blog at www.StillLifeSarah.blogspot.ba