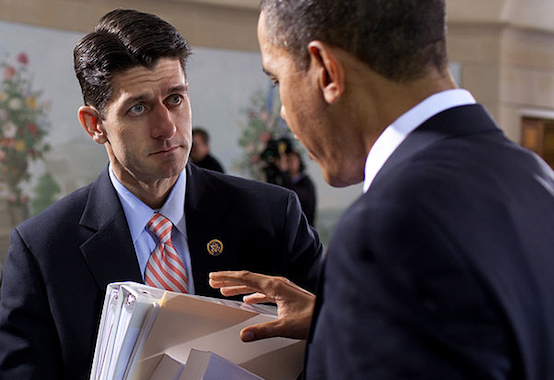 Speaker of the House Paul Ryan with President Barack Obama.

A ProPublica analysis of political fundraising shows conservative House Republicans have less and less in common with their party’s leaders, whose donors sometimes more closely resemble those of Democrats.

This story was co-published with The Daily Beast.

The Republican split that defines this year’s presidential campaign has been on display in Congress for years, with the most conservative wing battling party leaders on issues from spending to immigration.

A ProPublica analysis of campaign donations highlights just how profound this gap has become in the House of Representatives.

The analysis shows that the Republican leadership, including Speaker Paul Ryan and Majority Leader Kevin McCarthy, raises money from a vastly different set of political action committees than members further to the right. In fact, the donor bases for Ryan and McCarthy are actually more similar to some Democrats than to their colleagues in the main conservative grouping, the Freedom Caucus.

The fundraising disparity stokes the divisive atmosphere in Congress, reinforcing policy differences and sometimes affecting the outcome of legislation in surprising ways.

For example, when a Republican-backed plan to ease a campaign finance rule evaporated in Congress, it was the most conservative GOP lawmakers in the House who joined with liberal Democrats to get it killed.

The provision, which died in December, was initiated by Senate Majority Leader Mitch McConnell of Kentucky and was included in a must-pass spending bill. It would have eliminated caps on the money a national party committee can spend in coordination with a candidate.

The caps were originally meant to reduce the amount of outside cash flowing directly to advocacy for a particular candidate. Those in favor of lifting the restrictions say they are outmoded in the increasingly wild world of campaign finance and effectively give less-accountable outside groups like super PACs more influence than traditional parties.

Many Democrats argued that eliminating the caps would have opened the spigot to even more big money in politics. For conservatives, the reason to oppose the McConnell plan was different: It might have helped Republican leaders quash internal dissenters.

With a bigger campaign war chest raised from donors who support mainstream Republicans, the party would find it easier to select and back its favored House candidates. “The McConnell rider provides preferential treatment to the Washington establishment,” the Conservative Action Project, a group led by former Attorney General Edwin Meese, wrote in appealing to like-minded lawmakers to fight the measure.

The differences in donor bases affect other policy debates, said Dave Brat of Virginia, a Freedom Caucus member who defeated then-Majority Leader Eric Cantor in the 2014 primary and went on to take his seat. For instance, he said, conservatives lost their fight to defund the U.S. Export-Import Bank last year in part because the companies that benefit from the bank won over Republicans and Democrats who received campaign contributions from those firms.

The disparity is “a huge deal,” Brat said.

ProPublica’s analysis used a calculation called cosine similarity to compare each House members’ donors to others; two members with an identical set of donors would receive a score of 1, while two with no PAC donors in common would get a score of 0.

The degree of similarity between Ryan’s 2014 PAC donors and those of Freedom Caucus members Justin Amash of Michigan and Ted Yoho of Florida was close to nil: 0.03 and 0.16. Tim Huelskamp, a Kansas Republican who lost his seat on the House Agriculture Committee in 2012 for his votes against leadership, had few PAC donors in common with Ryan (a score of 0.15) or any other House colleague in 2014: his highest score was 0.3, with fellow Kansan Mike Pompeo.

PAC donors to House Majority Leader McCarthy, of California, were more like Democratic Whip Steny Hoyer’s (0.53 score) than they were those of Ohio Republican Jim Jordan, who heads the Freedom Caucus (0.31).

The gap between the leadership and insurgents has widened since 2008. That year, McCarthy’s PAC donors were more similar to those of Michele Bachmann, the former Minnesota congresswoman who founded the House’s Tea Party caucus, than they were to PACs that gave to then-Majority Leader Cantor or then-Speaker John Boehner. By the end of 2014, the gulf between McCarthy and the conservatives was much wider: all House GOP leaders, and even 11House Democrats, had PAC donors more similar to McCarthy’s than any member of the Freedom Caucus.

Cosine similarity scores for PAC donations made to members of the U.S. House of Representatives during the 2014 election cycle. A score of one would mean an identical set of donors, and a score of zero would mean no overlap between donors.

The donors that typically back House leaders are large corporate PACs with broad interests before Congress. They include the Automotive Free Trade International PAC, which represents American dealers of foreign car manufacturers. The PAC giveshundreds of thousands of dollars to Republican candidates, of which just $11,500 went to three dozen Freedom Caucus members during the 2014 cycle. On the other hand, none of the leaders received contributions from the Citizens United Political Victory Fund, which is one of the top overall donors to Freedom Caucus members.

The two factions do have some PAC donors in common, such as the Koch Industries PAC, which gave $201,500 to 36 members of the House Freedom Caucus identified by the Pew Research Center during the last election. The KochPAC gave more than $1.4 million to Republican House candidates, including its leaders.

Stephen Holmes, a spokesman for Home Depot, said many factors go into the company’s PAC giving, but caucus membership wasn’t one of them.

The failure of McConnell’s plan to lift the caps on party spending shows how the source of lawmakers’ contributions influences their votes. Republicans generally have voted in favor of looser rules on raising and spending campaign money, especially since the passage of the 2002 McCain-Feingold law that banned national parties from collecting unlimited contributions. Rick Hasen, a University of California-Irvine law professor who studies campaign finance and elections, said it’s notable that the Freedom Caucus pushed to preserve the party restrictions.

Related stories: For more of ProPublica’s coverage of politics and lobbying, check out our ongoing series, The Breakdown.