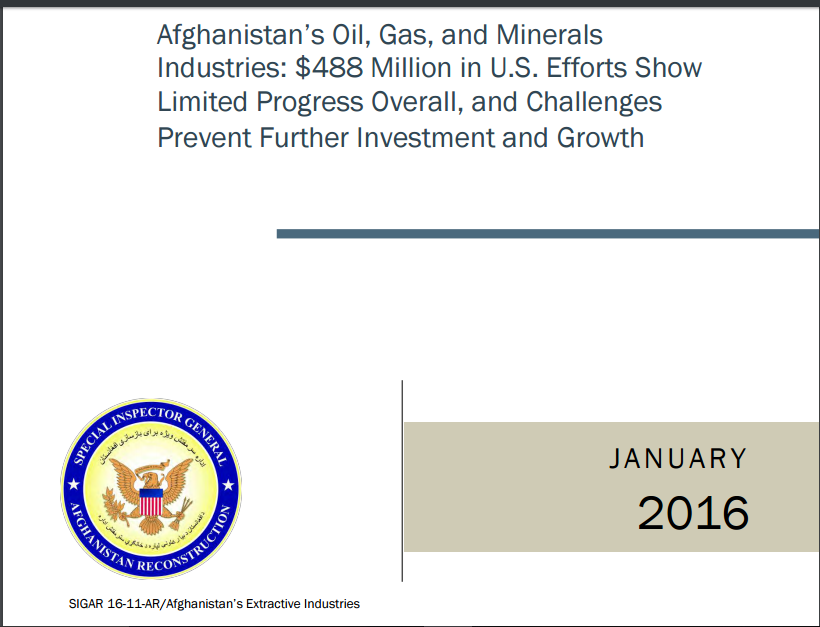 The Special Inspector General for Afghanistan Reconstruction has labelled yet another project in danger of failing. This time its U.S. plans to develop the country’s oil, gas and minerals industries.

The United States has spent nearly half a billion dollars and five years developing Afghanistan’s oil, gas and minerals industries — and has little to show for it, a government watchdog reported today.

The project’s failings are the result of poorly planned programs, inadequate infrastructure and a challenging partnership with the Afghan government, the Special Inspector General for Afghanistan Reconstruction wrote in its newest damning assessment of U.S. efforts in the war-torn country. The finding comes after some 200 SIGAR reports have detailed inefficient, unsuccessful or downright wasteful reconstruction projects. A recent ProPublica analysis of the reports found that there has been at least $17 billion in questionable spending.

We Blew $17 Billion in Afghanistan. How Would You Have Spent It?

Here’s just what the Special Inspector General for Afghanistan Reconstruction found. See for yourself how that money could have been used at home. Explore the app. The United States Agency for International Development and a Pentagon task force were in charge of developing a so-called “extractive” industry in Afghanistan — basically a system for getting precious resources out of the ground and to the commercial market. SIGAR called out both USAID and the Defense Department last year for their failures to coordinate and to ascertain the ability of Afghans to sustain the project, which unsurprisingly is not promising. In fact, when international aid stopped supporting the Afghan office responsible for oversight of the petroleum and natural gas industries, two-thirds of the staff were fired.

Exploiting these resources, which are estimated to be worth as much as $1 trillion, is pivotal to Afghanistan’s economic future. SIGAR noted that the Afghan government has shown progress under USAID’s tutelage in regulating and developing the commercial export of the resources. But the report said the project was still hampered by corruption, structural problems and a lack of infrastructure for the mining industry, such as reliable roads. Many of the mines operate illegally, with some profit going to the insurgency, SIGAR said.

When it came to individual extractive projects, there was little progress made, the IG found.

The controversial Pentagon task force in charge of much of the effort, the Task Force for Business Stability Operations, spent $215 million on 11 extractive programs, but “after operating in Afghanistan for 5 years, TFBSO left with nearly all of its extractive projects incomplete,” SIGAR found. Three of the programs technically met objectives, but one of those is of questionable value at best. The task force built a gas station for an outrageously inflated cost and in the end it didn’t have any customers. So while the objective to create the station was achieved, SIGAR doubted it was a worthwhile venture.

The task force, made up of mostly civilian business experts and designed to develop the Afghan economy, has come under fire from SIGAR and Congress for demanding unusual and expensive accommodationsin the country, allegedly punishing a whistleblower, and lacking overall accountability. The Senate is holding a hearing on the task force next week.

In today’s report, SIGAR highlighted that the task force spent $46.5 million to try to convince companies to agree to develop the resources, but not one ended up signing a contract. About $122 million worth of task force programs had mixed results, SIGAR said.

The Defense Department declined SIGAR’s request to comment on its findings. In its response, USAID said it has helped Afghanistan “enact investor-friendly extractive legislation, improve the ability to market, negotiate and regulate contracts, and generate geological data to identify areas of interest to attract investors.” Any conclusions and criticisms, USAID told SIGAR, “need to be substantially tempered by the reality that mining is a long-term endeavor.”