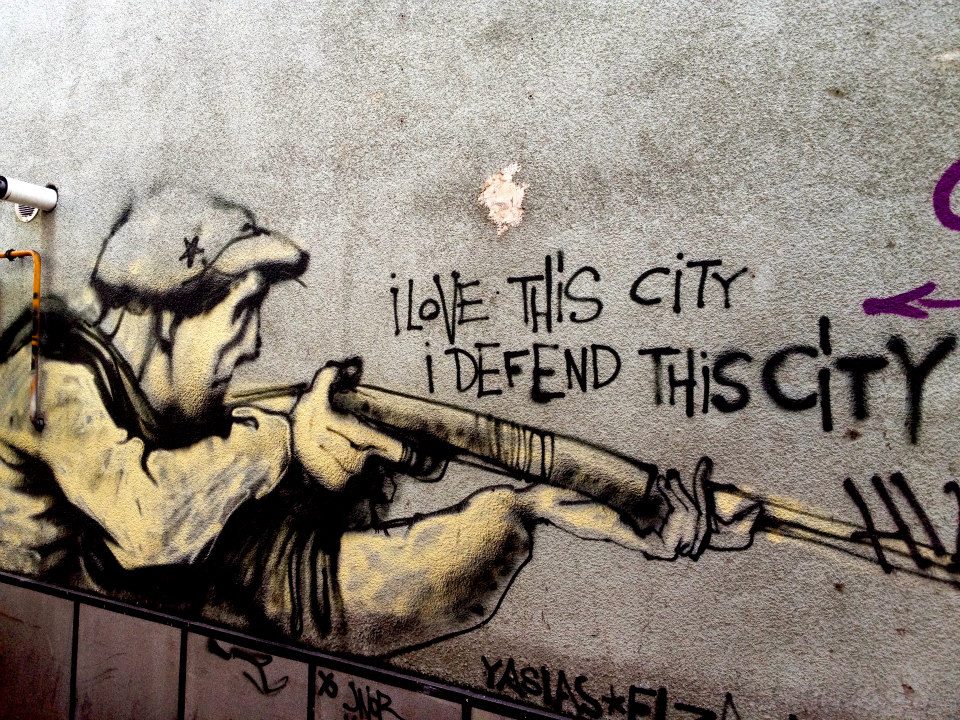 The graffiti is on a wall in Sarajevo, the capital city of Bosnia and Herzegovina that endured the longest siege of any capital city in modern warfare. 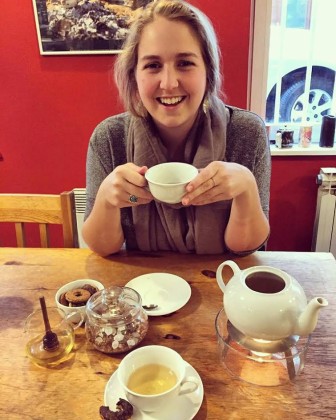 “Do you ever work with the students from the other side of town?”

It was an innocent question, one I posed to a Bosnian university student as we sat in her living room around a low coffee table, sipping miniature teacups of thick Turkish coffee.

I had arrived in Bosnia and Herzegovina only a few days before, and was still gathering my bearings.

It was an unusually cold winter in the southern city of Mostar: the slate-colored sky and snowcapped peaks cast a mystical shroud over the landscape as I rode the tiny airport shuttle bus into town.

The houses in Bosnia lack central heating, so she and I huddled together in our winter coats as the tiny space heater shuddered in the corner.

“We never meet them,” she replied to my question. She shrugged her shoulders as though this was obvious to everyone but me.

“We live separately. That’s just the way it is.”

My friend studies English at the university in east Mostar, a divided city where Muslims live in the east and Catholics live in the west.

They attend separate schools, call their language by different names (“Bosnian” and “Croatian”), and learn conflicting versions of the country’s history, each glorifying the victories of their respective ethnic group. She later told me that crossing into west Mostar felt, to her, like entering another country altogether.

How exotic this seemed to me at the time: a contemporary European society in which the population is segregated along ethnic and religious lines.

Having spent time in several divided societies, from Rwanda to Palestine and Northern Ireland, I am always trying to find common ground with the people I meet, to build relationships along experiences we share.

In this case, it did not take long to draw an uncomfortably stark parallel with my own life.

I went to college in northwest Washington, D.C. We were not sheltered from the knowledge that parts of D.C. were extremely poor in majority black neighborhoods. I knew instinctively that there were parts of the city where I should never set foot, indeed might not be able to persuade a cab driver to take me in the first place.

I passed homeless black veterans every day on my way to class, classes where we learned about mitigating poverty in far-off lands before marching past these hunched up figures lining the sidewalks on our way to lunch.

I greeted one man every day near the Metro. His plaintive calls for spare change carried the weight of resignation, his outstretched cup – a tired gesture – implored me to recognize that “ethnic divisions” existed not only in my international affairs textbooks, but were immediate and presently unfolding in my own backyard.

My friend’s words reminded me of these encounters in Washington, and an uncomfortable thought dawned on me: I had spent several years traveling the world to learn about post-conflict development and ethnic division, and here I had been living in a divided society all my life.

My country has been portrayed across the globe as the leading power of the free world, a beacon for freedom and justice. American embassies promote democracy and reconciliation in places like Bosnia that are recovering from the ravages of war.

Yet the United States still bears her own scars, scars of segregation and prejudice that mirror many divided societies around the globe. I rarely encountered these racial divisions growing up in Pembroke, New Hampshire.

Even after spending years in D.C., it took a 4,000-mile trip to Bosnia for me to become truly conscious of the deep rifts within my own society that had been staring me in the face all along.

Some American journalists describe the divided school system in Bosnia as though these schools sprung up out of the deep, organic hatred that has always existed between Bosniaks (Muslims), Bosnian Serbs (Orthodox) and Bosnian Croats (Catholics).

In reality, this system was shaped by American diplomacy in 1995, when America brokered the Dayton Peace Accords to end the Bosnian war. The divided schools in Bosnia are more strikingly similar to segregation in the United States before Brown v. Board of Education than any historical precedent in Bosnia, where these three ethnic groups lived peacefully together under Yugoslavia.

As an American abroad, I am constantly reading about the concerning state of affairs in my own country, with de-facto segregated public schools in many major cities, police brutality against unarmed black men and women, and an Islamophobic political rhetoric that has become the kind of language we are quick to condemn abroad as the product of “entrenched ethnic hatreds” plaguing “war torn” nations.

I am often gripped by fear at the possibility that my loved ones in New Hampshire could become the victims of a mass shooting in their workplaces or schools, a fear I have not once felt while living in a country regularly described by journalists as a “failed state” teetering on the brink of ethnic warfare.

It is in these headlines that I am confronted with how Americans are conditioned to think about developing nations around the globe. I think back to the homeless man I walked past every day on my college campus, and I wonder what I would have said, if an international researcher came into my classroom and asked whether I cooperate with black students from Anacostia?

I never meet them. We live separately. That’s just the way it is.

Sarah Freeman-Woolpert is originally from Pembroke, New Hampshire. She graduated from The George Washington University in 2015 and is currently spending ten months in Bosnia and Herzegovina, conducting research on youth activism and civic engagement. To read more of her writing, visit her blog at stilllifesarah.blogspot.ba.