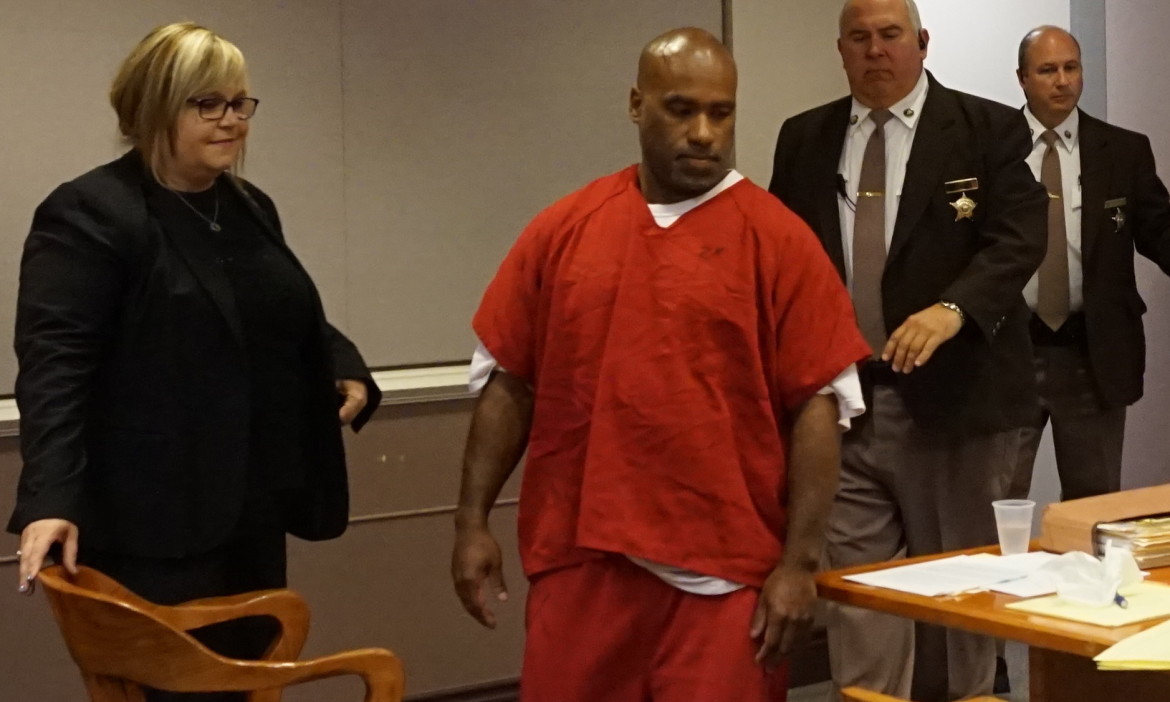 Eduardo Lopez is pictured with Public Defender Pamela Jones and bailiffs at Hillsborough County Superior Court South in Nashua during his hearing Oct. 13.

NASHUA – A judge has ruled against convicted murderer Eduardo Lopez’ bid for a new trial saying undisclosed evidence of a testifying police officer’s lie before Lopez’  1993 trial was “inconsequential” in proving his guilt.

Judge Jacalyn A. Colburn said even if the withheld evidence was favorable to Lopez, it “would not have affected the outcome.”

Lopez filed for a new trial after the state revealed two years ago that it failed two decades ago to notify him that then-Nashua police detective John Seusing had been disciplined for lying several years earlier.

In fact, Seusing’s testimony actually supported Lopez’ defense in some respects, Colburn wrote. Lopez was convicted of shooting to death Robbie Goyette and shooting another man who recovered on March 23, 1991, in Nashua. There was still ample evidence to convict Lopez, she said.

Lopez was 17 at the time of the shooting.

“There were over 20 witnesses at trial, and Detective Seusing’s testimony was inconsequential in establishing Mr. Lopez’ guilt,” Colburn wrote in the Hillsborough County Superior Court South order.

Colburn’s order granted the state’s motion for summary judgment, which is a way for a judge to decide a matter without a full trial.

Lopez’ lawyer, Paul Borchardt of the New Hampshire Public Defender’s Office, said he will meet with Lopez before deciding whether to appeal Colburn’s order.

They had argued at a hearing in October that the disclosure failure was material because Seusing testified about Lopez’ level of intoxication.

One of the theories of his defense was that Lopez was too drunk to form the requisite intent, which contradicted prosecutors who said he was practically sober.

Seusing went on to become chief of the Nashua Police Department and retired in January.  Seusing has refused to comment to InDepthNH.org.

Seusing took swabs of Lopez’ hands after his arrest to determine if he was the shooter that later tested inconclusive, she wrote.

Seusing’s testimony also backed up defense claims that Lopez was drunk because he testified Lopez had a .16 blood alcohol level.

Had Lopez’ lawyers spent time impeaching Seusing’s testimony because of the previous lie, “it would have instead undercut the credibility of the only state’s witness who supported his defense,” Colburn wrote.

In her 36-page ruling, Colburn summarized the testimony of 20 people at trial, including that of Seusing, Lopez and his mother.

“The state was able to prove Mr. Lopez’ guilt on the charges based on the testimony of several witnesses …,” Colburn wrote.

Her order summarized that testimony, too, which included two of Lopez’ friends telling jurors that Lopez made admissions to them and that they both saw him with the gun that night.

After hearing the guilty verdicts after his trial in 1993, Lopez flipped over a table and said, “I’ll get the (expletive) out of here your Honor,” Colburn wrote.

Lopez’s case drew media attention because it focuses on a controversial issue that pits the rights of police officers against the rights of defendants to all favorable evidence.

Seusing’s lie to his superiors in 1986 came to light two years ago after Anthony Pivero, a retired Nashua police officer, complained that Seusing’s discipline wasn’t disclosed in the 1995 murder trial of Michael Monroe.

Attorney General Joseph Foster’s investigation two years ago showed Seusing did lie about making an arrest, but quickly told the truth and was suspended for 15 days.

His discipline was revealed in the Monroe case as constitutionally required, but was never disclosed again, Foster said.

Foster said the judge in the Monroe case decided against disclosure and the Nashua Police Department mistakenly took that to mean it would never be disclosed again.

“They didn’t dig deep enough to get to the heart of the matter,” Pivero said. He was also critical because the attorney general redacted so much of the Seusing investigation that was later made public.

Because of the 1995 state Supreme Court case, State v. Laurie, the burden falls to prosecutors to prove that intentionally withheld evidence wouldn’t have affected the case’s outcome.

In that case, Carl Laurie’s murder conviction was reversed because prosecutors knew the police detective who provided key evidence against Laurie had credibility issues.

That system is currently under review by the Attorney General’s Office and a legislative commission.

Convicted murderers Timothy Brown and Ronald Schultz, who were sentenced for unrelated murders in Nashua, also had the option of filing motions seeking new trials because Seusing testified against them.

Brown, who is serving life without parole, told InDepthNH.org that he didn’t seek a new trial because Seusing played only a minor role in his trial.

Schultz was denied his bid for early release, but the parole board has since approved his release from state prison. He served his minimum 22-year sentence for second-degree murder.

Lopez is serving life without parole. He is awaiting a decision on a U.S. Supreme Court case that will determine whether he will be resentenced because he was a juvenile when he killed Goyette.