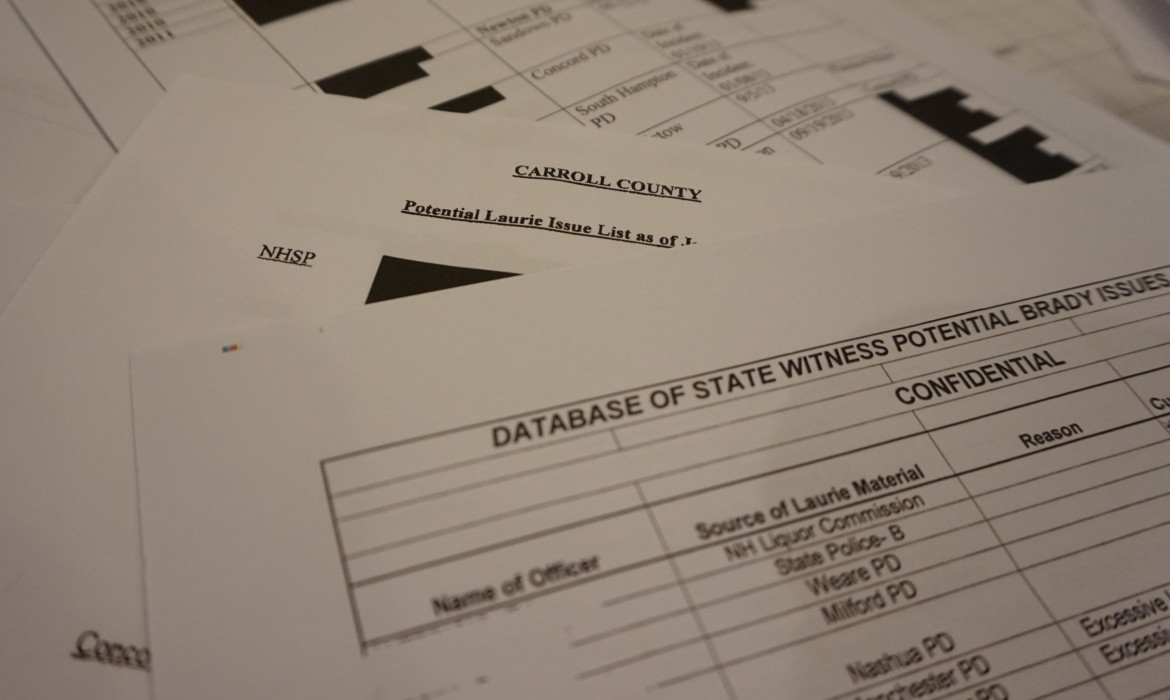 Gantert was fired from the Rochester Police Department in June of 2011 for falsifying a Lethal Assessment Protocol, which is used to gauge dangerousness in domestic violence cases.

He was reinstated by a Public Employee Labor Relations Board arbitrator the following August and remains employed by the Rochester Police Department, but his name is still on the Strafford County Attorney’s Laurie list.

“He filled the form out to the best of his ability and got fired for it,” said Nashua Attorney Timothy Goulden, who represents Gantert.

The arbitrator in Gantert’s case sustained a finding that Gantert violated the standard operating procedure “as it related to the falsification of reports,” and said that although discipline was warranted, discharge was too great a penalty.

Gantert filled out the form without personal knowledge as to the proper answers to questions on the form, according to Assistant Attorney General Patrick Queenan’s summary of the case.

Queenan will argue a court brief Thursday, which was filed by the Attorney General’s Office in the case, arguing that the due process Gantert did receive was adequate.

Each of the state’s county attorneys maintains a Laurie list of the names of sworn law enforcement personnel who have been identified as individuals with potential credibility problems. As the process has been handled in New Hampshire, a judge would then decide if the credibility issue would be disclosed to the defendant.

A law passed in 2012 appears to remove the judge from the decision unless it was such a close call the prosecutor was on the fence, but that law hasn’t been implemented.

“A police officer who is placed on the Laurie list is finished within the law enforcement community,” Goulden said. “He is essentially an indentured servant. He can’t leave or be a viable candidate for promotion.”

Gantert tried unsuccessfully in Superior Court to have his name removed from the Laurie list arguing the New Hampshire Constitution Article 1, Part 15 holds that because his reputation is harmed by being on the list, he is entitled to due process.

“Before anyone is put on the Laurie list, they should be given a hearing before an impartial board in a quasi-judicial setting,” Goulden said. “Your reputation is a protected liberty interest.”

Prosecutors are required to disclose dishonest testifying officers or risk having any resulting conviction overturned. Prosecutors can also be disciplined for withholding favorable evidence, but that rarely happens.

Goulden compared Gantert’s case to one in which the state Supreme Court recently decided that the names of three Manchester police officers should be removed from the Hillsborough County Attorney’s Laurie list.

Hillsborough County Attorney Dennis Hogan said he has already removed the names of the three officers from the list.

The officers had been disciplined for using excessive force while off-duty, but an arbitrator overturned the discipline and a previous attorney general ruled they did not commit a crime.

The court ruled: “Given that the original allegation of excessive force has been determined to be unfounded, there is no sustained basis for the petitioners’ placement on the ‘Laurie List.’”

Hogan said: “I thought obviously leaving them on the list was the correct thing, but I accept (state Supreme Court’s) interpretation.”

The attorney general and county attorneys have been working for the last couple of years trying to come up with a way to make sure the rights of defendants and police are protected, Hogan said.

“We are just trying to do what the Supreme Court tells us,” Hogan said. “We don’t want a case all undone because we didn’t do what we were supposed to do. We are not trying to make it hard on police departments.”

At a legislative hearing in January, state Sen. Sharon Carson, R-Londonderry, discussed Senate Bill 72 that would have established a procedure for disclosing exculpatory information in police personnel files when a police officer is serving as a witness or a prosecutor in a criminal case.

That legislation was changed and instead created a study commission called the Commission on the Use of Police Personnel Files, which will meet Wednesday at 1 p.m. in the Legislative Office Building in Concord.

“This bill is not to take away a criminal defendant’s rights or protect bad police officers. I proposed this legislation to establish a solid foundation and an even playing field for our law enforcement community,” Carson said at the hearing.

Nashua Attorney Chuck Keefe will argue for Gantert on Thursday.

“The Laurie process is unconstitutional because the officers who are subject to possible placement on the Laurie list are recognized as having a right to their reputation. Because of that they are entitled to due process,” Keefe said.