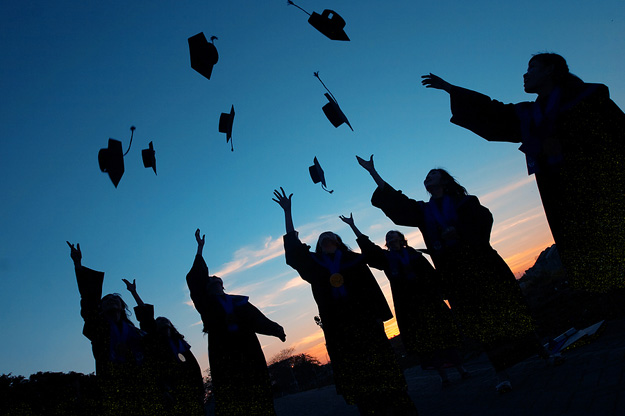 A new report released last week provides a detailed look at the graduation rates of low-income college students. At many colleges, low-income students graduate at much lower rates than their high-income peers.
Check out how New Hampshire colleges fared.

“Colleges have responsibility to ensure that the students they enroll are well served,” said Miller. “If you’re going to enroll someone, you should do the absolute best you can to graduate them, or else don’t take their money.”

The new report comes on the heels of recently released federal education data that has brought new focus on how low-income students fare at college, including how much federal debt they take on and how much they earn after graduation. The graduation rates of low-income students were not included in that data.

The group behind the new report, the Education Trust, collected the graduation rates of Pell Grant recipients — typically students whose families make less than $30,000 a year — for a selection of more than 1,000 colleges across the country.

A spokesman for University of Missouri-Kansas City said many of their students are low-income and that the school is working to do better. “We are not satisfied with that gap,” said John Martellaro. “We are investing more resources in our student success programs in an effort to narrow that gap.” (Read their full statement.)

St. Andrews did not immediately respond to requests for comment.

At more than a third of the colleges studied, schools were able to serve their Pell students almost as well as non-Pell students, with a gap of less than 3 percentage points.

Other schools have managed to graduate Pell students at an even higher rate than their non-Pell peers. According to the new data, nearly 90 percent of Pell recipients are able to graduate Smith College, compared with an 85 percent graduation rate of non-Pell students. And at Western Oregon University, Pell recipients have a graduation rate of 50 percent — nearly 10 percentage points better than their peers.

The Pell Grant program is the nation’s largest need-based student grant program, giving out billions of dollars annually. Yet for years, the data on Pell recipient graduation rates was mostly hidden from the public eye.

Although colleges are required to give the government graduation-rate data that’s broken down by gender and race, the data is not required to be reported by income or Pell Grant status. Since 2008, schools are required to disclose Pell graduation rate data if it’s requested by prospective students.

“It’s kind of astounding when you think about how much money is spent on the Pell Grant program,” said Andrew Kelly, the director of the Center on Higher Education Reform at the American Enterprise Institute. “We don’t have any idea about how much of that money goes to producing degrees. We don’t know what happens to Pell recipients after they enroll.”

In order to collect Pell graduation rates, the Education Trust filed requests for data through state higher education systems as well as with the schools themselves. Some of the data was purchased from U.S. News and World Report. However, only around 1,150 schools were included in the report, out of the more than 7,000 institutions in the country. The survey also did not include data from for-profit colleges, where many Pell-recipients attend school.

Sisi Wei contributed to this report.

Annie Waldman is a senior reporting fellow. She recently graduated with honors from the dual masters program at Columbia’s School of International and Public Affairs and the School of Journalism.