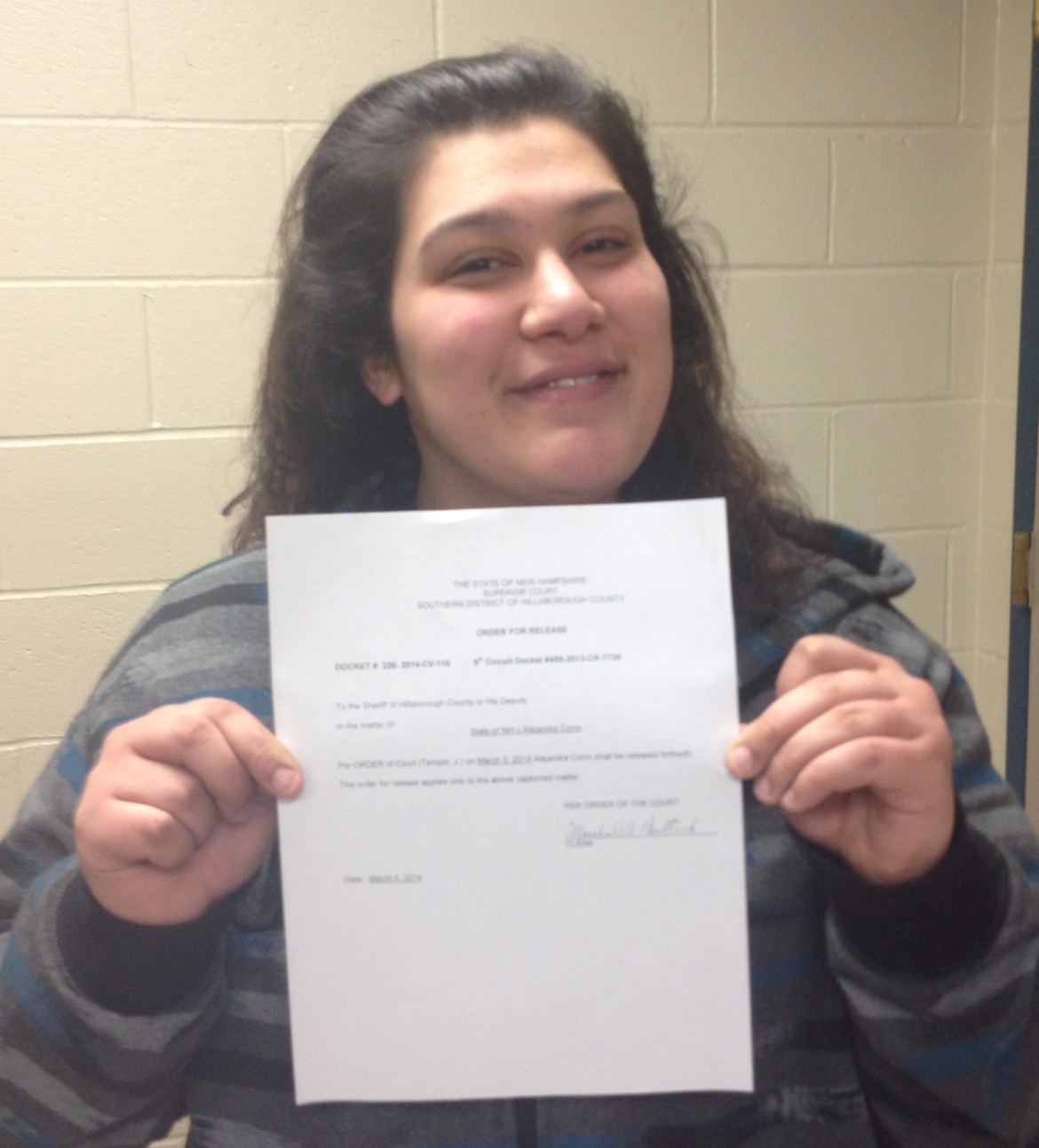 What happens when a 22-year-old single mother of two toddlers who can’t afford to pay a court fine fails to complete 62 hours of community service instead?

For Alejandra Corro, it meant being sentenced to serve nine days in Valley Street Jail in Manchester by Judge Thomas E. Bamberger in the 9th Circuit Court, Nashua District Division, on March 4, 2014.

That was after Public Defender Ryan Guptil told Bamberger that Corro had completed only 20 hours of the 62 hours of community service because of a significant fire in her home that forced her to move six weeks earlier.  (Click on story to hear court hearing audio.)

“How did that stop her from doing the community service?” Bamberger asked, according to a court transcript of the hearing.

The report estimated that in 2013 about 148 people who were unable to pay their fines were jailed without a meaningful hearing on their ability to pay, which cost taxpayers across the state about $166,870 to address an estimated $75,850 in unpaid fines that were never collected.

“Not only are these courts violating the law, they are actually causing the government to lose money doing it,” said Gilles Bissonnette, legal director of the ACLU-NH.

“These practices are legally prohibited, morally questionable, and financially unsound. Nevertheless, they appear to be alive and well in New Hampshire,” added Bissonnette.

The full audio and print transcript of Corro’s March 4, 2014, hearing are below:

Corro had pleaded guilty to a violation-level offense for stealing $645 worth of baby clothes from Sears and had been sentenced to 62 hours of community service in lieu of $620 in fines.

When she didn’t finish the 42 hours or pay $420, Judge Bamberger sentenced her to jail for nine days.

A public defender and the ACLU-NH filed a successful appeal to superior court arguing Corro’s incarceration was unconstitutional because she wasn’t willfully failing to pay.

Corro was released after one night in jail after the petition was granted, according to the ACLU-NH’s report.

“In a practice startlingly akin to the debtors’ prisons of the 19th and early 20th centuries, circuit court judges in New Hampshire commonly jail those who have no ability to pay fines without a meaningful hearing and without providing access to counsel,” the report states.

Bissonnette said, “In these cases, what the report demonstrates is that indigent defendants are commonly jailed without counsel and without a meaningful ability-to-pay hearing.

“This practice is systemic.  In fact, out of the 39 cases we sampled, 9 judges engaged in these practices throughout the state.”

The law requires that courts hold hearings to determine defendants’ financial status before jailing them for failure to pay fines, and defendants must be provided with lawyers for these hearings, according to ACLU-NH. If a defendant cannot pay, the court must explore options other than jail.

“Beyond its illegality and cost, this practice creates additional hardships for men and women in New Hampshire who are already homeless, unemployed, or just too poor to pay,” the report stated.

A news release issued by the New Hampshire Judicial Branch attributing a statement to New Hampshire Supreme Court Chief Justice Linda Stewart Dalianis said: “Consideration will be given to whether changes are called for to insure that the required constitutional safeguards govern the process used by courts in reviewing cases of individuals who have failed to pay court-imposed fines.”

At Corro’s March 4, 2014, court hearing, Public Defender Ryan Guptil was chided by Bamberger for asking to speak for Corro because he had represented her in the past. Corro then filled out new paperwork seeking a court-appointed attorney.

Bamberger mentioned during the hearing that he would soon be retiring and did so 10 days later.

The following are excerpts from the Corro hearing:

Judge Bamberger: She (Corro) was given the ability to pay the fine by completing community service. So today she either pays the balance of the fine or she goes to jail for nine days.

Ryan Guptil: What I would ask the court to do is to appoint counsel for Ms. Corro, if the court’s going to sentence – if the court is going to incarcerate her.

After a brief recess, Guptil asked the judge to recall the case so he could put Corro’s application for a court-appointed attorney on the record and preserve her appellate rights. Guptil explained to Bamberger it wasn’t a “willful failure to pay or to do the community service.”

Guptil: She had – there was a significant fire in her home about a month and a half ago.

Judge Bamberger: How did that stop her from doing the community service?

Guptil: Well, it was a significant disruption in her life. They had to be – the fire department –

Judge Bamberger: Attorney Guptil, I want to be real clear. I guess the good news for you all is I’m retiring shortly. This is my position – and I believe it’s going to be Judge Leary’s and Judge Ryan’s position but I won’t speak for them. If the public defenders are going to take the position that folks who don’t do community service are entitled to hearings, there will be no more community service.

Bamberger went on to tell Guptil that he wasn’t going to have his staff set up community service and then set up time payments after that.

The document he provided to you actually circles incarceration and puts 13 days there to underscore for you the fact that if you did not complete the payment of this fine or the community service that you would in fact be going to jail. And the orders of this court are clear, they’re unequivocal. My understanding is you do not have the $420; is that correct?

Judge Bamberger: Okay, I’m remanding you to the House of Correction(s). That fine will be paid at $50 a day. If somebody comes and provides you with some resources, you can certainly shorten your stay at the House of Correction by making payment on the outstanding debt. I am accepting the 20 hours of community service that you completed. That’s why the balance due is 420 (dollars), not 620 (dollars). 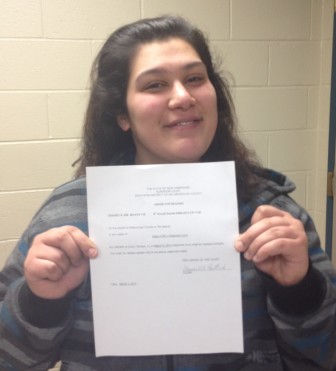