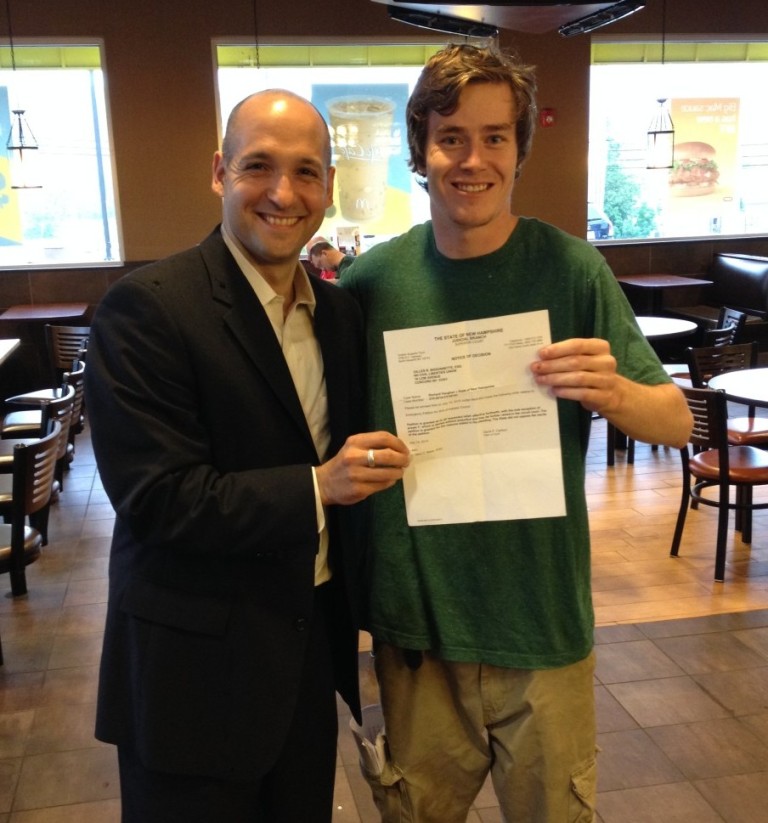 A year-long investigation by the ACLU-NH found New Hampshire commonly jails people for failing to pay fines when they are too poor to pay them. It’s a practice that cost taxpayers about $166,870 in 2013, according to the ACLU report released today.

“We found this practice to be systemic across New Hampshire,” said Gilles Bissonnette, ACLU-NH’s legal director. “This was not limited to one rogue judge or court.”

An estimated 148 people were jailed in 2013 in violation of the law and U.S. Constitution, the report said.

Bissonnette said those jailed were too poor to pay fines or did not pay a fee for the public defender who represented them.
“These practices are legally prohibited, morally questionable, and financially unsound. Nevertheless, they appear to be alive and well in New Hampshire,” said Bissonnette.

The practice also makes no financial sense since the government spends more to jail defendants than it ever recovers in fines and causes the government to lose money, Bissonnette said.

An ACLU-NH news release (see below) estimated it costs county jails approximately $110 per day to house an individual, but the individual serves off a fine at a rate of $50 per day.

The report concludes that the total costs of these practices to taxpayers statewide can be reasonably approximated to $166,870 in 2013 to address an estimated $75,850 in unpaid fines that were ultimately never collected, according to the release.

The investigation involved 2013 cases, but the practice is likely still going on, Bissonnette said.

The investigation was launched after ACLU-NH handled cases last year for three indigent people who had been jailed or were about to be jailed for not paying fines.

Those cases involved Alejandra Corro, Richard Vaughan, and Dennis Suprenant, who had been illegally jailed or were about to be jailed by circuit court judges for not being able to pay fines and fees.

“We obtained relief in all three cases,” Bissonnette said.
Two superior court judges and the New Hampshire Supreme Court granted the relief to the three individuals, he said.

Bissonnette said the ACLU-NH obtained the data from nine of the state’s 10 county jails. Merrimack County was unable to provide the information, he said.

The following press release was issued this morning by the ACLU-NH:
CONCORD – The U.S. Constitution and New Hampshire state law prohibit courts from jailing people for being too poor to pay their legal fines, but local courts throughout New Hampshire are doing it anyway.

This investigation was initiated after the ACLU-NH handled three cases in 2014 where two Superior Court Judges and the New Hampshire Supreme Court granted relief to three indigent individuals—Alejandra Corro, Richard Vaughan, and Dennis Suprenant—who were (or were going to be) illegally jailed by circuit courts due to their inability to pay fines.

These cases, which are described in the “Personal Stories” section of the report, show that debtors’ prison practices can counterproductively lead to termination of an individual’s new employment, impede ongoing efforts of that individual to gain employment, and prevent struggling parents from caring for their infant children.

“Being poor is not a crime in this country,” said Devon Chaffee, Executive Director of the ACLU-NH. “Incarcerating people who cannot afford to pay fines is both unconstitutional and cruel. It takes a tremendous toll on precisely those families already struggling the most.”

The law requires that courts hold hearings to determine defendants’ financial status before jailing them for failure to pay fines, and defendants must be provided with lawyers for these hearings. If a defendant cannot pay, the court must explore options other than jail.

“Supreme Court precedent and New Hampshire law make clear that local courts and jails should not function as debtors’ prisons,” said Albert E. Scherr, a Professor of Law at the University of New Hampshire School of Law and Chairman of the ACLU-NH Board of Directors.

“Yet circuit courts in New Hampshire routinely jail people without making any attempt whatsoever to determine whether they can afford to pay their fines.”

Beyond its clear illegality, debtors’ prison practices make no financial sense since the government spends more to jail defendants than it ever recovers in fines. As the report explains, it costs New Hampshire’s county jails approximately $110 per day to house an individual, yet an individual serves off a fine at a rate of $50 per day.

This $50 per day amount will never be paid back to the government once that time is served. Based on the data received and this $110 per day cost, the report concludes that the total costs of these practices to taxpayers statewide can be reasonably approximated to $166,870 in 2013 to address an estimated $75,850 in unpaid fines that were ultimately never collected.

“Not only are these courts violating the law, they are actually causing the government to lose money doing it,” said Gilles Bissonnette, Legal Director of the ACLU-NH. “As the report demonstrates, in jailing people who are unable to pay fines, the government is spending more money than the individual owed in the first place.”

“These practices are legally prohibited, morally questionable, and financially unsound. Nevertheless, they appear to be alive and well in New Hampshire,” added Bissonnette.
Read the full report at:
Final-ACLU-Debtors-Prisons-Report-9.23.15