The Department of Energy said it would seek new leadership for Los Alamos National Laboratory. But the University of California is still there, even after mismanagement caused it to lose its contract to run the lab — twice.

This article was produced in partnership with the Santa Fe New Mexican, which is a member of the ProPublica Local Reporting Network.

Despite a lengthy record of safety violations, the University of California will continue its 75-year legacy of running Los Alamos National Laboratory, the U.S. Department of Energy and National Nuclear Security Administration announced Friday.

The contract could be worth upward of $25 billion over the next decade, with hundreds of millions of dollars more in performance-based bonus fees. Six other corporations will join the team in support roles.

“We are committed to building on the legacy of world-class research, unparalleled innovation and service to public good that have been the hallmark of the laboratory since it was founded in 1943,” the University of California said in a joint statement with its new partners.

Get ProPublica’s Top Stories by Email

This is the second time the University of California has effectively maintained control over the laboratory despite concerns about serious mismanagement. In 2003, and again in 2015, the National Nuclear Security Administration said it would seek a new management contractor for the New Mexico lab following significant security breaches, costly accidents and injured employees.

The current management team, which also includes defense contractor Bechtel, amassed more than $110 million in fines and withheld bonuses because of health and safety issues. An electrical accident in 2015 left a worker hospitalized for over a month, and waste packaging errors led to a drum burst in 2014 at the Waste Isolation Pilot Plant in Carlsbad, exposing workers to radiation. The accident caused the storage facility to shut down for nearly three years.

Critics of the lab questioned how the university emerged as a winner once again and how any serious overhaul of the lab’s problems can occur if part of the existing leadership remains in place. Even the federal government called for a “culture change” at Los Alamos when it solicited bidders for the new lab contract last year.

This is a pivotal time for the lab. Los Alamos is expected to take on new nuclear work, building up to 30 plutonium pits per year. Producing the softball-sized plutonium metal cores, which trigger a reaction inside a nuclear weapon, is dangerous work, and Los Alamos has struggled to safely build even a single stockpile-ready pit in recent years.

The lab’s entire plutonium facility was shut down in 2013 after workers nearly caused a deadly accident. Since production restarted in late 2015, workers have violated safety rules meant to prevent a runaway nuclear reaction, and several workers have been exposed to radiation.

Building new pits also requires the lab to handle significantly larger quantities of plutonium, a task that federal officials said would be a “learning curve” for the lab.

In announcing the new contract, Lisa E. Gordon-Hagerty, undersecretary for nuclear security at the Department of Energy and administrator of the National Nuclear Security Administration, called Los Alamos a vital national asset.

“The lab will continue to be a critical resource to ensure the future safety and security of the United States as we begin work on new endeavors,” she said in statement. 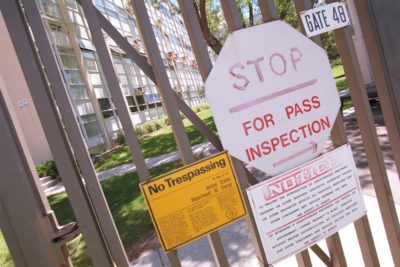 The birthplace of the atomic bomb couldn’t account for a toxic metal used in nuclear weapons production, potentially exposing workers to harm. The National Nuclear Security Administration acknowledges its oversight was “insufficient,” but says it is not aware of any workers who were exposed.

David Jonas, a Washington, D.C., lawyer who previously served as general counsel of the National Nuclear Security Administration, said he thought Battelle, which will take a leading role alongside the University of California and has experience running seven other national labs, could help create the changes Los Alamos needs.

“We need to give them a chance,” he said. “The question is then, if nothing changes, then what? And of course I don’t have an answer for that.”

Robert Alvarez, who was a senior policy adviser to Bill Richardson when he served as secretary of energy in the Clinton administration, said the lack of a contingency plan points to holes in the Energy Department’s oversight system.

“One thing that really hasn’t changed much is the lack of safety culture at the lab,” Alvarez said. “It’s a culture that lacks what you’d call an industrial safety ethos.”

Since the Manhattan Project, the Department of Energy has been granted wide leeway to oversee its nuclear activity. Its contractors are largely indemnified from paying damages in the event of serious accidents and are not bound by the same rules as the private nuclear energy industry. The department’s primary tools to penalize violations are issuing fines and withholding bonus awards. If all else fails, it can terminate a lab operator’s contract, as it did with the current managers of Los Alamos.

“It is a low-risk environment, except when it comes to their reputation,” Alvarez said of the contractors. “And even that, they overcome and reformulate into a different consortium — but it is usually the same cast of characters.”

The main loser in Friday’s decision is Bechtel, which had submitted a contract bid under a team it formed with Purdue University.

A third bidder was the University of Texas and Boeing. A fourth team, first reported by the trade publication Exchange Monitor, included BWXT, Jacobs and Southeastern Universities Research Association.

Terry Wallace, director of Los Alamos National Laboratory, said in a statement that the lab is committed to working with the new management team.

“While the contract change will bring in a new team of parent companies, the laboratory’s mission remains the same: to serve the nation in the tradition of excellence that has defined Los Alamos for the last 75 years,” he said.

Alvarez said the only tool left to enforce better safety than in the past would be congressional oversight and withholding funds.

But, Alvarez said, “there has been no serious congressional oversight for several years.”

Do you work or have you worked at Los Alamos? We’d like to hear from you. Email rmoss@sfnewmexican.com.

Rebecca Moss covers energy and the environment, including Los Alamos National Laboratory, for the Santa Fe New Mexican. Email her at rmoss@sfnewmexican.comand follow her on Twitter @rebeccakmoss.